A Look at Gender in YA Fiction

I’ve always been interested in gender and how it intersects with sexuality.  It’s something almost everyone in the GLBT community deals with on a daily basis, whether we think about it or not.  From the effeminate gay boys and butch lesbians who don’t fit into the gender norms, to the guys who identify as “straight-acting,” to the drag queens and drag kings, and most especially, the transgender members of our community.  As someone who never quite fit into the standard norms of my gender, it’s a topic I can relate to and it was something I really wanted to explore in this column.

This month I set out to read as many books that dealt with transgender storylines or issues of gender-variance in some way as I could.  And boy did I read a lot of them.  Yet at the same time, I don’t feel like I read nearly enough.  To be clear, I read, and will be discussing books that focused both on trans teens as well as cisgender teens who do not conform to societal gender norms.

I started with Luna by Julie Anne Peters (Megan Tingley).  This book was my first experience with the trans community.  Luna opened my eyes to trans issues and led me down the path to becoming an outspoken ally.  The power of a book.  Not only is Luna beautifully written, but it offers a look at the life of a Male-to-Female (MTF) trans teen through the eyes of her cisgendered sister.  This perspective provides an easy window for non-trans readers to step into this world through the eyes of a character they may be able to relate to better.  One scene that hit me in particular was a flashback of Luna as a very young child (Liam), trying to pull off her penis because she wants to look like the other little girls, and the lack of understanding from the adults in her life. 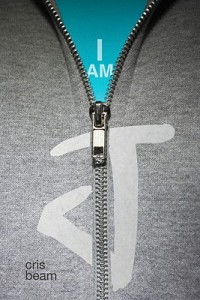 I was not as big a fan of Parrotfish by Ellen Wittlinger (Simon & Schuster).  This book was a welcome addition to the market when it came out in 2007.  Parrotfish is told from the perspective of a trans teen, an FTM named Grady, as he begins to transition.  Unfortunately, I agreed with other reviews that felt Grady’s voice was too feminine for a character who felt like a boy his whole life, and I found Grady’s journey to acceptance much too easy and unrealistic.

I originally read Parrotfish while working on I am J by Cris Beam (LBBYR) (coming in March 2011), a book that is very close to my heart*.  Another story from the perspective of an FTM teen, Cris Beam’s novel appealed to me because of its promise of authenticity, with the author drawing from her experiences working with transgender teens.  I also loved that it featured a cast of multicultural characters.  I am J is not your typical “coming out story,” following J from self-identification, through experimentation with chest binding and passing in public, to coming out.  Beam deftly weaves realistic trans experiences together with the angst and hormones that every teen, trans or cisgender, experiences.

Debbie Harry Sings in French by Meagan Brothers (Holt) had been calling to me for some time. In her debut novel, Brothers touches on drug and alcohol abuse, the death of a parent, and a 1990s teen discovering his inner drag queen.  What could’ve been an amazingly hip and emotionally moving book felt, to me, very thin and watered down.  I didn’t feel connected to Johnny, the main character, and his journey throughout seems largely motivated by other people.  While he embraces drag and impersonates his idol, the fabulous Debbie Harry of Blondie, he doesn’t seem drawn to cross-dressing or particularly motivated to do so until he is pushed into it by his girlfriend.  (Yes—he’s straight.) Though, it was a satisfying breath of fresh air to see a straight male character embrace his feminine side. 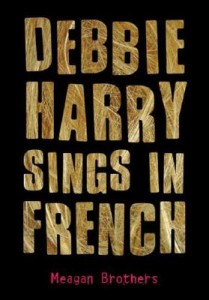 Continuing my streak of teen drag queen novels, I jumped right into Freak Show by James St. James (Puffin), starring the incomparable Billy Bloom, a teen glitter queen transplanted from New York to the Everglades.  Billy’s voice, like his personality, is showy and dramatic.  This became somewhat obnoxious after a while, but the story—unrealistic but wonderfully romantic—ultimately won me over.  What touched me the most about Freak Show was St. James’s portrayal of bullying.  Billy is tormented at his new school day after day, and eventually beaten so badly he is hospitalized.  With so many teens in the news committing suicide after being bullied and gay-bashed, it made me realize just how important books like this are.  Billy Bloom is a character who doesn’t falter, despite the cruelty and hatred that is lobbed at him, and he fights his bullies with the only weapon he has at his disposal—his fabulousness.

Directly following Freak Show, The Boy in the Dress by David Walliams (Razorbill) was a disappointment.  A middle grade novel originally published in the UK, this story follows Dennis, a boy who loves soccer and fashion. He is encouraged to wear a dress to school, and fools his teachers and classmates into thinking he is a French exchange student.   The story was thin and the plot device that the book centers around was used mostly for laughs.  Like in Debbie Harry Sings in French, Dennis is straight and egged on by the girl he likes.  Once his secret is revealed, he is immediately accepted by everyone without much hesitation, and even the solution to Dennis’s expulsion is handled simplistically.  Most disappointingly, after his initial adventure with cross-dressing, Dennis’s love of fashion and beautiful dresses falls by the wayside and this reader was left wondering if he would ever cross-dress again. 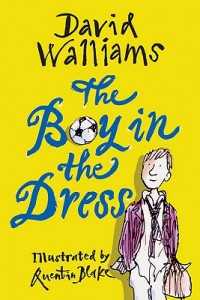 After my foray with male cross-dressing, I moved onto female cross-dressing.  I was already in the middle of Tamora Pierce’s Song of the Lioness Quartet (originally published in the early ‘80s and a YA fantasy classic), when I decided to write this article.  Perfect for older Middle Grade and younger Young Adult readers, this four-book series—Alanna: The First Adventure, In the Hand of the Goddess, The Woman Who Rides Like a Man,  Lioness Rampant—follows a young girl who disguises herself as a boy in order to train as a knight. Though the series flies through the years fairly quickly, I appreciated Alanna’s struggle to reconcile her gender with her identity as a knight.  Though she has typically masculine interests, such as fighting and riding off on adventures, Alanna still finds herself coveting beautiful dresses and asking to be taught the social customs of a lady.  I was glad to see that by the end of the series Alanna is able to be both a lady and a knight of legend without sacrificing one for the other.

By far the standout in my reading was Eon by Alison Goodman (Firebird).  A fantasy inspired by Chinese and Japanese culture, Eon is another girl-disguised-as-boy story.  Eona, disguised as Eon, hides her gender in order to achieve her goal of becoming a Dragoneye, one of twelve masters whose life energy is tied to mystical dragons of the Chinese zodiac.  Eon is swept up into an adventure of deceit, court politics, alliances, and magic.  What is striking about Eon, after reading the Song of the Lioness quartet, was how deep Eon has buried her true gender in order to perpetuate her masquerade, to the point where I often forgot that she wasn’t a boy.  An extremely complex character motivated by poverty, Eon’s femininity peeks out at only a few key moments amidst the rejection of her female energy. 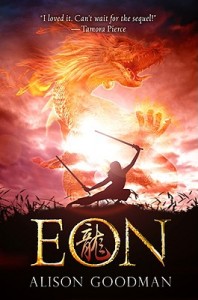 I was also surprised to find a transgender character in Eon.  Lady Dela is described as a transwoman content in her biological body yet fully embracing of her true gender; a two-souled character known in her culture as a Contraire.  Lady Dela is a respected member of her tribe, but at court she is only protected by the Emperor and has been attacked and scarred for her transgendered nature.  The juxtaposition of Lady Dela with Eon was intriguing—a woman born with a man’s body and a woman disguised as a man.  Eon evoked musings on the role of women in this fantasy culture.  Dela, who would be more powerful as a man, chooses to live her life as the gender she knows is true to her, while Eon is a woman who believes she must disguise her true gender in order to become more powerful.

After taking a step back and looking at the books I read**, I found it interesting that those about girls dressing as boys were fantasy novels, while the books about cross-dressing boys were all contemporary.  Likewise, all of the boys dressed up to explore their feminine side or their love of fashion, whereas the girls cross-dressed to achieve power, glory, or status.  I would love to read a book that takes on female cross-dressing outside of a fantasy setting.  I was also surprised that there weren’t more novels about MTF trans teens, although Eon’s Lady Dela was a nice surprise.

Ultimately, there is still a lot of room in the market for more books featuring trans teens.  As with gay and lesbian fiction, I hope we will begin to see trans characters taken beyond the coming out experience and starring in stories that weave issues of gender and sexuality into a broader storyline.  The market is certainly wide open.

* I mentioned this in my previous article, but I was one of the two acquiring editors for I am J.  Obviously because of this, my opinion is biased.  Now you know.  It’s still an amazing book.

** During the writing of this article, I became aware of another novel featuring a transgender teen, Almost Perfect by Brian Katcher.  I will try to read it for a future article, but in the meantime I thought I’d mention it.  And no I have not forgotten about Infinite Darlene from David Levithan’s Boy Meets Boy.  I will be reading this book for next month’s article, so stay tuned.

T.S. Ferguson is a freelance developmental editor and an avid reader of young adult and children's books. He was previously an Assistant Editor with Little, Brown Books for Young Readers.