What Happens When You’re Old & Gay?

What Happens When You’re Old & Gay?

Gay Pioneer Asks, “Where Do We Go From Here?”

The Gay Community has a huge potential problem facing it that very few people are currently even aware of—or want to think about!  I ran headlong into it when I woke up in the hospital six months ago, after an “idiopathic” seizure at age 77, possibly caused by a brain-tumor, or cancer, (it wasn’t) with a $75,000 hospital bill for a weekend visit. Fortunately I had Medicare!

But I had no family to support me and only a few close and very busy friends to help me, when I needed help more than I ever have.  It has turned out that two idiopathic seizures, two years apart, have been caused by medication my doctors prescribed, which I’ve been taking for 15 years—but no matter the cause, I can no longer physically take care of myself and can’t even drive my own car to the store.

I’ve been living “alone” (with a dog) for 22 years since my lover died of AIDS in 1988. It had never occurred to me that I would ever be “helpless” as he had been, the last years of his life, when I took care of him.  I had blocked myself from even thinking about it, but my own physical needs and conditions are suddenly forcing me to consider a more and more likely end to my life: dying under some bridge down by the river, homeless, with my starving dog my only companion.

Ironically, part of my problems are caused by my being a popular “Gay Author” in the late sixties, early seventies. I wanted to tell the “truth” about homosexuality—that it wasn’t “as advertised,” “sinful and perverted.” My books were briefly very popular.  In fact, my books have been called “propagandistic” and they are, absolutely and deliberately so.

Vintage Cover of 'I Want It All'

I’m 200% pro-Gay. I believe that homosexuality will save the planet.

Most of those writers are now dead, but none of us could be considered “successful,” and none of us made enough money from our books to actually live on. Since the only way you could get a Gay book published in those days was to make it “dirty” (my publisher called all of our books “fag-hots”) I now have a reputation as a “dirty-book writer,” even though I’ve received glowing testimonials for being pro-Gay as well as a readable writer.

My books are still available on Amazon.com, sometimes for outrageous prices (none of which comes to me), where one reviewer has favorably compared my writing to “Genet, Forster, Joyce, White and even Faulkner.”

In a sane world, I should be making a living writing Gay love stories and mysteries, but, because of my rep as a “dirty-book writer,” not one Gay publisher would even consider publishing my new novel, All of Me (Can You Take All of Me).

After horrendous experiences with publishers, I’m having to pay to publish it myself as a pay on demand and e-book from RoseDogBooks—who have been good to work with so far, but I’m holding my breath. At any rate, it does not seem likely that I’ll be able to pay rent from royalties for a few more years.

I have only a few years worth of money left in my savings account, and the medical profession is suddenly sucking that dry, much sooner than I expected. I am technically “disabled” and forbidden to drive. At least I am home with my dog, but I’m having to pay a friend $20 an hour to clean my house and mow my lawn.

My mother, a widow at age 75, spent ten of the last years of her life in an “Adult-Retirement” community of about 12 attached, 1 and 2 bedroom apartments. They had lunches and Bingo and trips to Tahoe, all heterosexual activities. 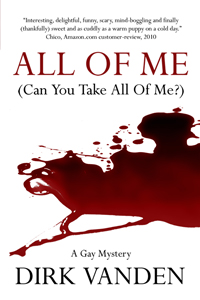 Read our review of 'All of Me'

I am now past that age and need help called “assisted living.”  I can’t clean my house, I can’t cook for myself, and now I can’t drive to the market.  I have heard that there are Gay Retirement Complexes in LA and SF and NYC, but there is nothing anywhere near Sacramento, and I couldn’t afford such a move in any case.

Such care and services remain a vital, unfilled, unrecognized need for a growing demographic.  More and more of us older Gay men and women will be needing the help traditionally supplied by family. I’m very lucky, so far. I have three close younger friends who are my “adopted family,” and will help me if something happens, but they can’t take me in if I need that kind of care. I’m able to stay in my home because my best friend comes over weekly and cleans and fixes things—he would do it for free, but I insist on paying him.  I’d have to pay a straight handy-man even more.  My straight female friends come by with food from time to time—but I need daily Meals on Wheels and can’t afford them.

I am sick of microwave lunches. My PCP (Primary care physician) tells me there is too much salt in frozen dinners.  I’m sure this phenomenon is happening wherever there are older Gay people like myself. There’s no place for us to go.

My mother spent her last two years in a “Convalescent Hospital,” with a hundred other dying people, where she developed dementia. Her only escape was insanity.  I know how the medical establishment treats Gay people—with an attitude slightly higher than contempt, slightly less than concern. As an old Gay man, I will never allow myself to be put in such an establishment—and yet, what alternatives do I have? A handful of pills some night before it happens?

Someone should seriously consider forming a national Gay-Investment Corporation and buying up property that could be converted to Gay Retirement Housing. Two and three unit buildings, in areas “safe” for people like me to walk our dogs. Gated communities would be perfect. With facilities staffed by Gay people.

Otherwise, there are going to be more and more of us under bridges very soon.

Blacklight: First Installment in a New Gay Cozy Series has Serious Cat-titude
Cause I Am Here To Remind You
The Banal and the Profane: Nick Sumida

Dirk Vanden has been called ''a pioneer of gay erotica.'' Seven of his novels were published to critical acclaim from 1969 to 1973, when homosexuality was illegal and gay literature banned. Some of those original books are still available online. His "All Trilogy" (I Want It All, All Or Nothing, and All Is Well) is available in e-book format. His latest novel, All of Me (Can You Take All of Me?), utilizes his publishing experiences as the basis of a gay murder mystery. At age 77, Dirk lives in Carmichael, CA, with his dog, Buddy Jr. www.dirkvanden.net