Rave admits he thought about making Green gay, “however it was too obvious of a choice to write for me. By going against the grain, it seemed a great deal more interesting.”

Rave also did the same thing in his second book, Waxed, about a trio of sisters. He says writing straight characters isn’t hard: “I don’t mean to sound all New Agey, but at the end of the day we are all human beings and are connected. We often like to compartmentalize ourselves into groups and let everyone know exactly how different we are, but at our core we are the same.”

Alex Sanchez, author of the popular gay YA novel Rainbow Boys and the recently released straight novel Bait, agrees: “Characters are merely vessels for human emotions. It’s those conflicting emotions that I write about. And we all experience those emotions, regardless of our sexuality. In that sense, the writer’s and the character’s orientation fundamentally don’t matter. Desire is desire. Love is love. Anger is anger. Loss is loss.”

Nicola Griffith (Stay, Always) is known for her lesbian protagonist Aud Torvingen, however, she has written many straight secondary characters as well. “I’m surrounded by straight people. I grew up with them,” she says, jokingly. “…I’ve read their books, worn their clothes, eaten their food, watched their movies, listened to their music. I’m steeped in their culture. It’s my culture. … How could I not get in their heads?”

To get inside his straight protagonists’ heads—and his queer ones—Sanchez is constantly asking himself questions. “What is the character thinking? What is he feeling? How does he show it? The more I can connect with the character, the more the readers will be able to.”

While Nancy Garden is most celebrated for her groundbreaking lesbian YA novel Annie on My Mind, she has also written straight novels like The Loners, about a boy named Paul who falls in love with a dysfunctional girl named Jenny. You wouldn’t think she’d be able to use her personal experience for that, but she says, “It was easy for me to imagine how Paul felt when he fell in love, having fallen in love myself with a girl when I was his age.”

Val McDermid has written about lesbian journalist/detective Lindsay Gordon in books like Report for Murder and Final Edition, but she’s also written about straight protagonists, such as private detective Kate Brannigan and clinical psychologist Tony Hill. However, these choices were not conscious attempts to write about a straight character. Rather, she says, “story is what comes first for me, then I have to figure out whose story it is.” 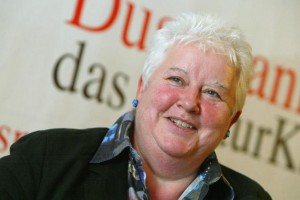 McDermid also says that she doesn’t think a writer’s orientation matters to the reading public: “They want a well-written book with a good story and strong characters. I think they often don’t have a clue about the writer’s biographical details when they choose a book.”

For gay writers wanting to write straight characters, Rave offers this piece of advice: “If the characters feel authentic to you, then you’re on the right path. If they feel cartoonish to you, then they most likely are.”

And if you worry about not being able to reach gay fans with your straight characters, think again: Rave has received a number of positive fan responses from the queer community. “I feel incredibly fortunate when anyone tells me they connected with one of my characters. Hopefully, there’s at least one character in both novels that audiences feel speak to them or registers some sort of emotional connection. That’s one of the best parts of writing.”

Let's Find an Agent for Your LGBTQ Book
Queering the Literary Canon: 'The Wedding Between Two Husbands' a Lope de Vega play
'Fun Home' Gets a Cast Recording, the Norman Rockwell Biography Controversy, and Other LGBT Literary...