An excerpt from our interview coming this Friday

Last week, I chatted with bestselling author Armistead Maupin to discuss his latest Tales of the City novel, Mary Ann in Autumn (Harper). Along the way, the conversation steered toward Logo’s new reality TV Show, ‘The A-List.’ Maupin explains how he coined the term “A Gay” and his refusal to be on any list.

AG: I was listening to a Radio interview you did in 1982 called “The Gay Life with Randy Alfred.” It’s part of the GLBT History Project which has found a home in San Francisco in the Gay History Museum. What really stood out for me, is that you use the term, “A Gay Socialite.” You basically coined the term, “A Gay.”
…
You said, “A Gays are not a part of mainstream life—they are pariahs. Often, they are in the field of decorating: They affix themselves to the A Regular society; an extra man; a Walker; socio-Sexuals; social climbers who read W magazine and they all want to get into Interview Magazine.”

AM: There’s a TV show devoted to them right now! They haven’t gone away. 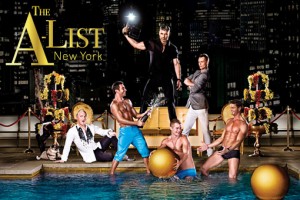 AG: That’s what I want to ask you! Have you seen Logo’s “A List” and do you have an opinion on it?

AM: I won’t watch it. I know already. I’ve seen the previews. I’ve never seen such contemptible people in my life.

First of all, people who stand around bragging that they are on the A List, aren’t. Let me put it that way: Their whole life revolves around being around the right people and going to the right clubs, but as far as their own personal accomplishments are concerned, they are nowhere close to that.

Tony Kushner is on the A list as far as I’m concerned. Not these empty boys bragging about their buff bodies and whose hair they did last week.

That is nothing against hairdressers or any other of the professions that often get associated with being gay.

I judge people individually on the basis of their hearts and their instincts. That show seems to deliberately dig up the worst.  This is us kind of taking the bait for the Real Housewives of New Jersey.

AM: And by the way, when I invented the term “A Gay,” I meant it with utter contempt and ridicule. It’s kind of ironic some of the people I was spoofing back then, eventually came to claim it as their badge of honor that they were in Tales of the City as one of the A Gays.

AG: I was sitting with a friend having dinner the other night and we said we should come up with our list of the real A List Gays. You mentioned Tony Kushner, but my friend actually mentioned you, he said you were very A List.

AM: I’m happy that somebody tells me that they like my work, or they like what I have to say politically, but I have really no interest in being on a list. Once you agree to join the list, you’ve shown yourself to be corrupt.