Librarian (To Be): Stewart Van Cleve

Librarian (To Be): Stewart Van Cleve

1.What made you decide to work at the Tretter Collection?

I really fell into it. I began working here as an undergraduate student with an LGBT Studies minor degree; part of the minor requires about 80 hours of community service over a semester. Jean-Nickolaus Tretter came to a class on “GLBT Social Movements” and talked about the collection. It was the first time I had heard about it, and I was amazed that such a resource resided on campus (advertising our presence is an ongoing work-in-progress.) I started working as a volunteer in the spring of 2008, processing the records of the local Twin Cities Pride Committee.

My major degree is in Urban Studies, which is based on urban planning but includes history, sociology, etc. I have always been interested in local history, but I never found information on the local LGBT population—it was as if we magically appeared in Minneapolis/St. Paul one day and no one really noticed. When processing the Pride committee records, I was truly thrilled by the idea that I was producing history, in a sense, for future generations to learn from. It then became my life’s purpose to continue working at the Tretter Collection, so I consecutively applied for research grants, then became a student employee, then I worked on specific projects, and I finally became an intermittent acting curator when Jean went into the hospital this past summer. 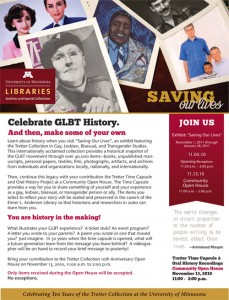 2. Could you tell us about the history of the Jean-Nickolaus Tretter Collection? What is its significance in terms of LGBT resources, and its reputation as an LGBTIQ history resource for researchers?

Jean Nickolaus-Tretter has been collecting flyers, pamphlets, books and a host of other items since the early 1970s. He was a linguist in the Navy with top-level security clearance and “came out” when he returned home. In the Twin Cities, he was a part of many pioneering organizations (such as the Pride Committee) and friends with Minnesota gay activists like Steve Endean (who went on to found the Human Rights Campaign), Jack Baker and Michael McConnell (who were the first in the nation to sue for marriage rights in the U.S.). While attending the University of Minnesota, he expressed an interest in studying gay and lesbian anthropology. The faculty basically told him that “no such thing exists,” so he dropped out.

The Tretter Collection officially began in 1982. At the time, Jean co-organized Minnesota’s involvement in the “Gay Olympics,” which were in Los Angeles that year. Jean already had a reputation as a collector of gay and lesbian material, so a friend introduced him to Jim Kepner, one of the founders of the ONE Lesbian and Gay Archives in Los Angeles. They clicked almost instantly, and Jean visited the archives, where he fell in love—I think they were good friends until Kepner passed away in 1997. I also think Jean’s visit to the ONE really legitimized his collecting habits.

Throughout the 1980s and 90s, the Collection grew according to the principles that Jean learned at ONE. Basically, the Kepner philosophy placed value on everything—right down to wallpaper, napkins, mugs, whistles, you name it. Some have suggested that it is indicative of hoarding, while others consider it a wise understanding of historic value. A problem with this collection strategy is, of course, space. By the late 1990s, Jean had to rent a second apartment just for storage, and his own living quarters were jammed full of material. Community leaders in and outside of the University of Minnesota knew about Jean’s private collection, as he frequently opened his home for scholars to use. In 1996, a wealthy businessman donated a large fund to the university for the purpose of establishing a GLBT programs office, and the Tretter Collection became a desired asset of the new office.

Two events occurred in 1999 that prompted the Collection’s move to the university. Former Minnesota Governor Elmer L. Andersen donated a large sum for the construction of an archival library on campus, and Jean suffered an attack where he worked—a mental ward for violent youth offenders. Without a job, Jean risked running out of money for his apartments, and thus the Collection itself would be at risk. After lengthy negotiations, the Tretter Collection moved to the Elmer Andersen Library as a special collection in 2000.

We are one of the largest LGBTIQ archives in the world, and we have materials in more than two dozen languages. I think our greatest strength is the breadth of the collection. We function as a museum, an archive, and a library. We have had many noted scholars visit us—recently I assisted Cindy Patton, who flew in from Vancouver to look at our video collection (which amounts to more than 6,000 tapes and DVDs).

3. How are materials acquired for this collection? What types of books and periodicals do you select? Who is involved in the selection process?

Due to professional standards and space constraints, we don’t acquire material as aggressively as Jean did when it was his personal collection. The true benefit of being part of a university is that we have the infrastructure and funding to acquire, process, and store large collections. In many cases, we are approached by an organization or individual who wishes to donate materials. We also seek out collections that add to our diversity, notably material that relates to the experiences of lesbians, transfolks, bisexuals, and/or people of color. In terms of books, we usually seek out very rare volumes through dealers and private collectors.

The “we” here is Andersen library staff and the Tretter Collection’s advisory committee. Community members (many of whom are professors, collectors, or authors) hold a majority over university staff on the committee, and they make recommendations regarding acquisitions. We do not make purchases without consulting the committee first. Our acquisition conversations usually hinge on the historic value or rarity of a given item. Frequently, someone asks “Can this be found at other libraries on campus?” In many cases, we are the only institution who owns the item. For example, we recently purchased a pamphlet from Karl Ulrichs that was previously unlisted on WorldCat.

4. Where is the Tretter Collection located on the University of Minnesota campus? Is it identified with signs and on campus/library maps? Is the collection open to the public, or only academic scholars? 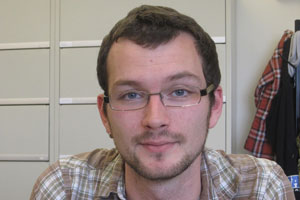 The Collection itself is located in the caverns [there are two] of Elmer Andersen Library on the University of Minnesota’ West Bank, near downtown Minneapolis. The caverns are dug into the bluffs of the Mississippi River, and the actual offices and reading rooms are located in an office building that sits on top of the bluff. The caverns are 8 stories below the building, and are accessible only by staff with card-key access. The entire facility, of which Tretter is only a part, is the size of two football fields. It is temperature-controlled, moisture-controlled, and pressurized according to archival standards.

Processed materials and catalogued items are accessible to the public, but they must be retrieved by a staff member. Unprocessed items and artifacts are usually available, but may have use restrictions requested by the donor or some preservation issues that need to be addressed.

The Tretter Collection is identified on some University Maps (depends on the scale—it’s a big campus!), but we do not have a sign in the Andersen Library aside from a place in the building’s directory. However, the University does an excellent job printing The Tretter Letter—our biannual newsletter, and our various event announcements. It also supports our own website, although the website barely scratches the surface of what we have. It’s always a work in progress!

5. What types of outreach activities does the Tretter Collection staff perform to market their resources? Who are the main audiences that you seek to attract?

We produce a traveling exhibit called “Framing GLBT Lives,” which typically travels to Pride Festivals all over the country and throughout the world—even as far away as Russia. We have scanned images of our artifacts and printed them on themed panels that illustrate LGBTIQ history for the public, and volunteer scholars write explanatory entries for the panels. This exhibit allows us to show items that we have without risking damage to them.

The Tretter Collection also maintains a display case beside our office, which usually changes every two months. We are on a rotating schedule for the use of Andersen library’s main exhibit room, and we are currently preparing this room for our 10th anniversary exhibit. I would say that we don’t have a target audience, per se, but the majority of regular patrons are students and professors. Community members who are curious are always welcome to ask for a tour of the caverns—giving tours is one of my favorite parts of the job. People are simply amazed by the size of the collection.

6. Recently the ONE National Gay & Lesbian Archives of Los Angeles has become an official collection within the University of Southern California Libraries system. What are the advantages or disadvantages of being part of the university library system?

I think there are many more advantages than disadvantages. The funding is paramount, as is the staff support. We also make use of the larger library system’s resources, such as its shipping and receiving facilities, archival-safe storage materials, development staff, and public relations office. A disadvantage would be the current economic climate, which hasn’t meant cutbacks for us, yet does stress an already challenging job.

7. I am highly impressed that the University of Minnesota Press publishes a great number of LGBTIQ books, considering that it has no formal LGBT Studies certificate or degree program. Why have they made this decision?

Funny you mention that—I just signed a contract with the U of M Press to write a book about local LGBTIQ history. Okay, and now we have to have the book plug! The tentative title is Land of 10,000 Loves: Queer Places in Minnesota History, and it should be in print sometime in early 2012 if all things go as planned.

The university doesn’t have a GLBT studies major, and I was very disappointed by this. I absolutely would have done that major—luckily, faculty in the Urban Studies department were very supportive and allowed me to frame my urban research in a nearly-exclusive LGBT context. However, the University does support a GLBT Studies minor, which I have.

8. Does the Tretter Collection have access to any LGBTIQ EBook collections, electronic journals, or databases of any kind? Have there been any requests from patrons for more electronic resources or EReaders?

Not that I’m aware of. I typically refer patrons to glbtq.com for basic reference information, but electronic formats are definitely an area that we are interested in.

9. What advice do you have for librarians who would like to select LGBTIQ resources for their collections?

Make sure you do your homework! The LGBTIQ community is a sensitive one, and only recently have many institutions given credence to the value of queer scholarship. Some individuals with valuable material are extremely wary of relinquishing ownership, but their holdings can sometimes be breathtakingly important. If you walk into a potential acquisition meeting with as much information as possible, then you can avoid mistakes that may jeopardize your chance of preserving an LGBT legacy.

10. If you ever had to sell your personal book collection, what is the ONE LGBTIQ title that you would keep, and perhaps pass on to someone of the next generation?