How many same-sex couples get to edit an anthology together? Is it even a good idea?

More mercurial duos might throw stacks of manuscript at each other, fight over the merit of essays, and go behind each others’ backs to lobby for same with the book editor (we’re not naming names, but we have it on good authority that this actually happens).

It could have been a War of the Roses, but I’m afraid we’re not going to be able to disclose a tale of haute literary lesbian drama.

Candace: The morning of the day I signed my divorce papers with my ex-husband, I pitched Krista Lyons at Seal Press the idea of an anthology by women who left men for women. 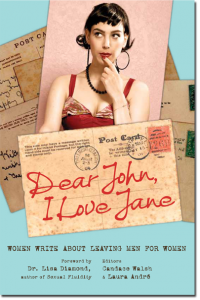 Krista and I had already worked together on my last anthology, Ask Me About My Divorce: Women Open Up About Moving On.

Luckily, Lyons expressed strong interest, which meant that I got to float through the divorce-paper-signing ritual on a cloud of anticipation instead of feeling like my heart was being dragged behind a pickup truck along a rocky dirt road.

Next, we drafted a call for submissions and began the process of soliciting essays.

Laura: Given the number of celebrities who’ve left men for women in the past couple of years, I imagined there would be a corresponding population of lesser-known women who might be willing to share their stories.

Still, I was terrified that we wouldn’t get enough submissions and that anxiety fueled my posting the call for submissions everywhere I could find that was likely to be seen by our target group of writers.

Candace: She jumped out of bed at 3am more than once because she thought of new places to send it (after going to bed at midnight).

Sometimes I felt like a Call for Submissions widow.

Laura: We didn’t have an advertising budget, so we had to rely on free websites, blogs, and good old-fashioned email to spread the word.

Thankfully, our listing at Lambda Literary brought us a significant number of submissions, as did a blog entry on AfterEllen.com.

We also pursued two heroines of ours: Dr. Lisa Diamond, whose book (Sexual Fluidity) was one of the major inspirations for this anthology, and author-activist Jennifer Baumgardner. They both graciously agreed to write for us (the Foreword and Epilogue respectively), and they each did a wonderful job contextualizing the work. 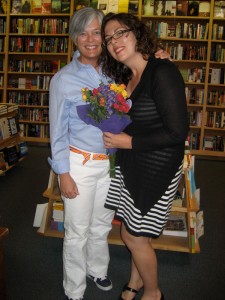 Candace: When the process began, Laura was living in Albuquerque and I was in Santa Fe. We were engaged, committed, and spent most of the week with each other, albeit in two cities.

But we didn’t officially live together, in contrast to the old U-Haul cliché. I had regretted jumping the gun that way in the past, and Laura wanted to break her own historical pattern of antsy cohabitation.

If other relationships had been omelets, we wanted this one to be a Fabergé egg we both built together, deliberately and over time. And so the book fell into that rhythm as well.

Laura is a master at organization and timelines. Her exacting perspective, academic training, and background in visual culture, women’s studies, art history, and feminism shored up my loosey-goosey “It’s just such a great story” stance.

Truth be told, all 130 submissions were great stories, so we had to look at other criteria.

Needless to say, Laura kept all of the wanting-to-wild-out details and paperwork in impeccable order. She had us on a schedule that precluded panicked emails to writers asking them to turn around revisions in the next sixteen hours.

I could seem like a feckless Oscarine to her Felixette—but you haven’t seen the Terminator expression my face assumes when I’m in line-editing mode.

We drilled through stacks of submissions, created spreadsheets, tweaked wording, wrangled bios, and contracts, separated the excellent from the quite good, and prostrated ourselves before those whom we coveted blurbs.

Laura: Our manuscript was due in March, and it was about that time that we decided to start looking for a place to live together. Part of me thinks that working together with Candace on this project gave me the confidence that we could live together well—and, guess what, we do.

We moved in July, right in the heat of the proofreading stage, so we spent hours huddled between boxes going over the proofs. It was a particularly rewarding time because we were both ecstatic about our new house and thrilled to see book really come together, as our lives did the same.

Candace: As with the submissions, I saw a lot of potential in funky houses with fatal flaws. I’m so glad Laura was more particular.

Laura: The book fulfills all our hopes for it—it’s a resource for women who are experiencing this profound shift in their sexuality, as well as a diverse collection of strong, literary essays from women who’ve been through it themselves.

Candace: Even though I’ve read the manuscript about ten times, I still reliably laugh out loud, punch the air, or get verklempt when I come to certain passages.

There’s a plangent beauty in the sound of these voices, talking separately and together, about the sexiness, terror, reorganization, and declarations that come with an inexorable shift in desire.