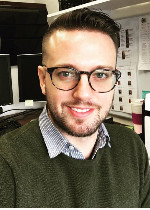 Zach Shultz is a higher education administrator in New York City and a freelance writer. His work has appeared in the Rumpus, Brevity, Entropy, Huffington Post, INTO, The Gay and Lesbian Review Worldwide, and more. He received a master’s in Latin American Studies from Tulane University in New Orleans and a bachelor’s in Spanish and Sociology from the University of Kentucky. He’s currently working on a book-length project about AIDS and gentrification in New York City told through the story of one almost famous playwright and historical preservationist who died in the 90s.