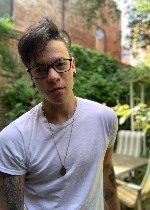 Tovah Leibowitz is a film and television editor, essayist, and screenwriter based in Brooklyn, NY. He has worked with legendary producers Spike Lee, James Cameron, Amy Schumer and his most recent editorial credits include Comedy Central’s Broad City and tbs’ Search Party. His essays have been featured on Autostraddle, Harlot Magazine, and Fist Zine. Tovah is currently working on a forthcoming memoir on trans-sexuality, pornography and pleasure, and new modes of sexual emancipation that do not demand redemption or redress.