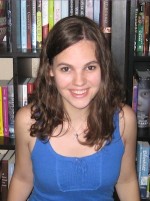 Rebecca Leach is an information designer and copyeditor from Austin, Texas. By day, she turns charts and data into visually compelling presentations, and by night, she hunts down the grammatical errors and typos that often lurk in manuscripts. In 2011, she received her master’s in writing from the New School University in New York City. She writes whenever she can—in the morning when she wakes up, in the car on the way to work, during lunch, and between turns at flying trapeze classes. Currently, she’s working on three speculative YA novels, which are in varying stages of completion.