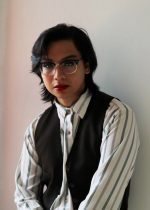 Raf Antonio is a Latinx, queer, LA born creator based in Toronto. His play Salvador: A Latin-Canadian Fantasia made him the first winner of the Playwrights Guild of Canada’s RBC Emerging Playwright Award. Recently, Raf served as a story consultant on Teletoon series Princess Sparkly Butt and the Hot Dog Kid – available on YouTube – and made his professional debut with the world premiere of Rope Running Out, which was developed at Soulpepper Theatre and Cahoots Theatre, directed by Indrit Kasapi, and presented by lemonTree creations. Raf is now Playwright-in-Residence at Cahoots, developing The Effeminates: A Queer Tale of Bloody Vengeance under the guidance of Artistic Director Marjorie Chan. He is also part of the inaugural Buddies Salon at Buddies in Bad Times Theatre, facilitated by company dramaturge Mel Hague.