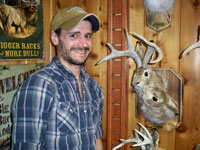 Nicolas Hoover is a poet, playwright, and fiction writer from Seattle, WA. His work has appeared in [untitled], Fringe Magazine, and Breadcrumb Scabs. Nicolas was also a semi-finalist for L Magazine‘s Literary Upstart competition, and won first place for the Writers’ Weekly 24-Hour Short Story Contest in 2010. The Red Merit Badge of Courage, his children’s play, is available for purchase or production from Baker’s Plays. He completed a BA in Drama from University of Washington in 2004.