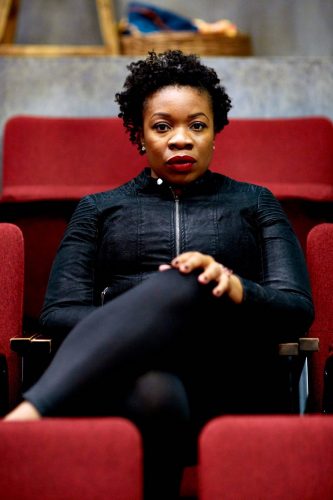 Mfoniso Udofia, a 1st Generation Nigerian-American storyteller and educator, attended Wellesley College and obtained her MFA in Acting from the American Conservatory Theater. During her stay in the Bay, she co-pioneered youth initiative, The Nia Project, providing artistic outlets for youth residing in Bayview/Huntspoint. Mfoniso is a former Playwrights Realm Page One Resident and, in January 2016, Playwrights Realm produced the World Premiere of Sojourners, the origin story of the Ufot Family Cycle. In Spring 2016, The Magic Theater in San Francisco produced the West Coast Premiere of Sojourners and the World Premiere of the third installation in the Ufot Family Cycle, runboyun, in repertory with each other. New York Theatre Workshop produced the return of Sojourners to New York City in Spring 2017, which ran in repertory with the World Premiere of Her Portmanteau, and was previously developed at the National Black Theatre in an I Am Soul Residency in 2015. Her Portmanteau had its West Coast Premiere at Boston Court Performing Arts Center in Pasadena, CA. Mfoniso is also currently at work on a commission from the Oregon Shakespeare Festival translating Shakespeare’s Othello, through their Play On! program. She has four upcoming productions: Her Portmanteau (American Conservatory Theater, Winter 2019), In Old Age (A Magic Theater World Premiere, Spring 2019), runboyrun (A New York Theatre Workshop East Coast N Premiere, Fall 2019) and In Old Age (A New York Theatre Workshop East Coast Premiere, Fall 2019); and, she is a staff writer on the 3rd season of Netflix’s, 13 Reasons Why.

Mfoniso’s plays have been developed at and/or presented/produced by Playwrights Realm, The New Black Fest, Rising Circle’s INKTank, At Hand Theatre Company, The Standard Collective, American Slavery Project, Liberation Theatre Company and more. Mfoniso is the recipient of the 2017-2018 McKnight National Residency and Commission at The Playwrights’ Center in Minneapolis and a Resident Playwright at New Dramatists.