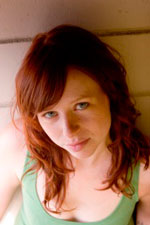 Liz Latty is a queer, feminist, adoptee, writer, educator, and activist originally from the Detroit area. Her work can be found in The Wayne Literary Review, The F-Word Magazine, make/shift and the anthology We Don’t Need Another Wave: Dispatches from the Next Generation of Feminists, among others. Liz is a 2012 nominee for the Jackson, Phelan, and Tanenbaum Literary Awards from the San Francisco Foundation and her chapbook, A Parallel Life, is forthcoming from Unthinkable Creatures Press in October of 2012. She holds an MFA in Creative Writing from Goddard College and currently lives in Oakland, California where she works in public education.