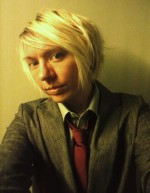 Jessie Nash is a British writer, punk-poet, and photographer. He studied BA Creative Writing in London and MA English in the USA, where he also taught undergraduate writing classes. Jessie’s poetry has appeared in publications such as Poetry Express, Luna Negra, Skin to Skin: The Art of the Lesbian, and the Off the Rocks Anthology. His fiction has been published in Glitterwolf, Lunch Ticket, (T)our and Minetta, and his short story ‘Danny’ won the Thompson Prize in the Altogether Now 2012 competition. Jessie has also written reviews and features, worked as a copyeditor, and is a trans man.