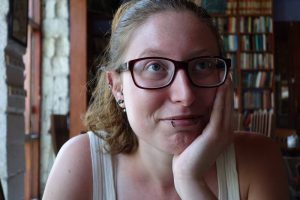 Ilana Masad is an Israeli-American writer. Her fiction has appeared in the New Yorker, McSweeney’s, Tin House, Printer’s Row, Joyland, and more, while her nonfiction and book criticism have appeared in the Guardian, the Washington Post, the LA Times, Vice, and more. She is the founder and host of The Other Stories, a podcast featuring fiction writers both seasoned and new. She enjoys social media too much for her own liking.