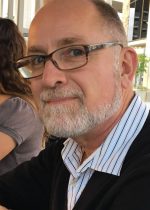 Hank Henderson is a poet and storyteller. His monologues and one man show have been featured at Highways’ BEHOLD! Queer Performance Festival, INSTALL: WeHo, APT 3F, and the West Hollywood One City One Pride Arts Festival. Most recently, written work has been published in RFD Magazine and online at Entropy Magazine and HIV Here & Now. Hank has also curated the LGBTQ reading series homo-centric since 2010. He lives in Los Angeles with three cats and a man named Joe.