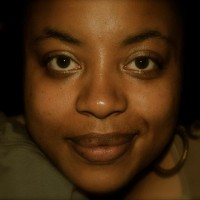 Erica Cardwell is a black queer essayist, educator, and cultural critic. Her work is centered on deconstructing the imagery and social perspectives of women and queer people. She writes about art, identity, language, and race. Her essays and reviews have been featured in The Feminist Wire, Ikons Magazine, In the Flesh Magazine, Bitch, and forthcoming for Hyperallergic. Throughout New York City, she has shared her work at La Galleria, The Nuyorican Poets Cafe, The Brecht Forum, Heels on Wheels OpenToe Peepshow, Raw Fiction, and Queer Memoir. Currently, she is pursuing an MFA in Writing at Sarah Lawrence College while overseeing the arts, culture, and women’s programming for LGBTQ youth at The Hetrick-Martin Institute. Erica lives in Astoria, Queens. She tweets at @EricaCardwell