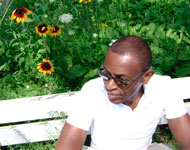 Ennis Smith is an MFA graduate of the New School’s creative writing program, where his work won him the National Arts Club Literary Scholarship in Nonfiction. His memoir piece, The Super with the Toy Face, was published in the anthology New York: Lost and Found (WW Norton, Thomas Beller, editor); another memoir piece, The Rapunzel Effect, was recognized as an outstanding work of nonfiction by In Our Own Write. Other publications: Boys in the City (Bruno Gmünder Verlag GMBH, publishers), the literary journal Ganymede; Attitude: The Dancer’s Magazine, where he’s been an associate editor and dance critic since 2006. For his volunteer work with LIFEBEAT/Musicians Against AIDS, Ennis was the featured subject on PBS’s In the Life. He currently teaches writing at SUNY Empire State College in New York.