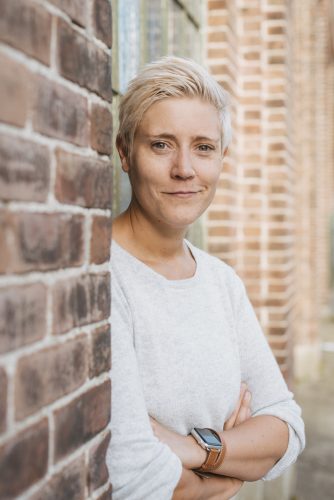 emily m. danforth’s debut YA novel, The Miseducation of Cameron Post (a coming-of-GAY-ge story partly about conversion therapy and set in rural Montana in the 1990s), won the Montana Book Award and was a finalist for the American Library Association’s William C. Morris Award and a Lambda Literary Award. It was also made into a feature film by queer filmmaker Desiree Akhavan. emily’s short fiction has won Chroma Magazine’s International Queer Fiction Award and Willow Springs Magazine’s George Garrett Award. Her creative nonfiction has appeared in various publications and has been featured on NPR’s program “All Things Considered.” emily is an Associate Professor of English-Creative Writing at Rhode Island College in Providence. Her second YA novel, Side Talks With Girls, is forthcoming from HarperCollins Publishers.

emily lives in Rhode Island with her wife Erica and their two semi-terrible dogs, Kevin and Sally O’Malley.