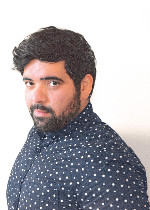 Edwin Alexis Gómez is a Los Angeles based Queer Nicaraguan-American writer, performer and director. His body of work blends the exquisite pain and resounding beauty of love and life, and becomes its own mythology. Gómez’ one-act play Flower of Anger opened this Spring as part of Q Youth Foundation’s Eastside Queer Stories Festival. His micro short “Quédate Callado” won a Grand Jury Award at the 2018 Outfest Fusion Film Festival, and his second short film “La Sad Boy” was recently named an official selection of this year’s Outfest Film Festival where it will have its world premiere. Gómez is currently working on his forthcoming book of poetry La segunda muerte y otras cosas olvidadas, and is in pre-production for his short film “Joyride” which received a Latino Public Broadcasting grant and follows two teenage sisters who break their grandmother out of her senior living facility for one last joyride.