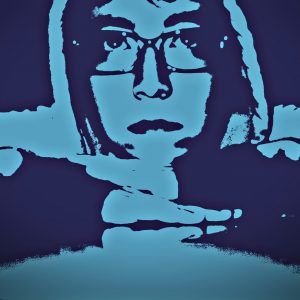 Daryn Wilde thinks of herself mostly as a ‘hermit crab’. Like, this fleshy thing she walks around in is just the shell and she’s this odd, squishy, carapaced thing inside that peeks out through the ocular openings. She also thinks she has a ‘rabbit heart’. She thinks of herself in terms of lots of odd animal metaphors, huh? She lives in New Jersey. She’s a librarian. She’s a vegan. She’s a non-binary, grey-A, what’s-it-to-ya? She drinks too much coffee (or so they say). Her writing is usually dark and twisty.