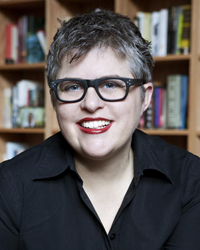 Cris Beam is an author and professor in New York City. She is the author of Transparent, a nonfiction book that covers seven years in the lives of four transgender teenagers, which won the Lambda Literary Award for best transgender book in 2008, and was a Stonewall Honor book. Her young adult novel, I am J, was released by Little, Brown in March 2011, and a nonfiction book about the state of foster care in the U.S. will be released by Houghton Mifflin-Harcourt in 2013. She teaches creative writing at Columbia University, New York University, The New School, and Bayview Women’s Correctional Facility. She has an MFA in creative nonfiction from Columbia University and has received fellowships from the Point Foundation and the Corporation of Yaddo.