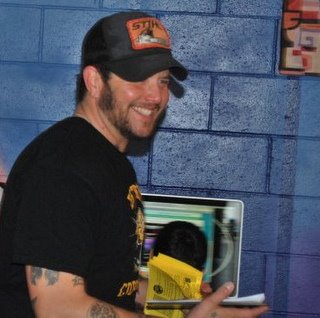 Cooper Lee Bombardier is a blue-collar transgender visual artist and self-taught writer. He was raised in the South Shore of Boston. His visual art has most recently appeared in group shows like Meow Wolf in Santa Fe, NM; the 2011 National Queer Arts Festival in San Francisco and the forthcoming ‘zine Faggot Dinosaur. Cooper’s writing has appeared in several periodicals, most recently Pathos Literary Journal and Original Plumbing, and the anthologies The Lowdown Highway, From the Inside Out, and Trans/Love. A veteran of the original Sister Spit tours, he has performed his writing all over the country. An avid fan of low-budget travel, Cooper has been to every state in the U.S. except North Dakota and Alaska. He loves good coffee, callouses, dogs, lifting weights, riding bikes and communing with nature. Currently he is pursuing a Master’s degree in Writing/Publishing at Portland State University, where he serves as a graduate assistant.