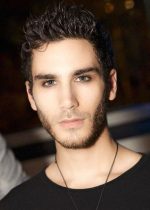 Christopher Bakka is a writer from Texas. He studied English literature and theatre at Knox College, where he was awarded a Ford fellowship to attend the summer writing program at Naropa University’s Jack Kerouac School of Disembodied Poetics. His work has appeared in If You Can Hear This and in Assaracus, both from Sibling Rivalry Press. A lover of languages, he’s translated Arthur Rimbaud’s A Season in Hell and The Illuminations, as well as several works by François Augiéras, from the French. He’s working on a record of his time in Paris, France.