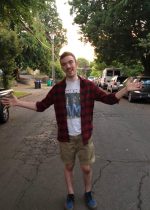 Charlie James Cote is a playwright from Atlanta, Georgia. He is the recipient of the 2013 Columbia College Chicago Fresh Play Prize. His work has been developed at Chicago Dramatists and Horizon Theatre, where he was a Young Playwright’s Fellow in 2010. He is thrilled to return to Horizon Theatre as a playwriting apprentice for the upcoming 2018/2019 season. A lifelong storyteller, Charlie also harbors passions for screenwriting and creative non-fiction, as well as dramaturgy and new play development. Often explored topics in Charlie’s work include existential dread, time, gay love, the intersection of science and the arts, and the paradox of masculinity. In undergrad, a professor once described his playwriting style as “poetic realism,” he isn’t entirely sure what this means, but he has included the label in every artistic statement since.