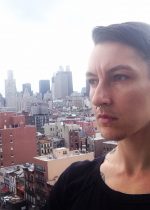 C. Bain is a gender liminal writer-performer based in Brooklyn. His plays have been performed at the Kraine, the Tank, and at Dixon Place in NYC. His poetry appears in anthologies and journals including PANK, theRumpus.net, A Face to Meet the Faces, the Everyman’s Library book Villanelles, and Muzzle Magazine. Thrice-nominated for the Pushcart Prize, he has also competed on and coached multiple slam teams. Debridement, his poetry collection, was a finalist for the Publishing Triangle Awards. He works extensively with mythology, embodiment, trauma and sexuality. But he’d rather just dance with you.