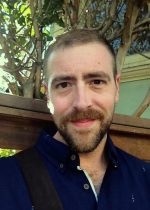 Benjamin Fainstein is a playwright and theatre maker currently based in Portland, Oregon, where he serves as literary manager and resident dramaturg for Portland Center Stage at The Armory and JAW: A Playwrights Festival. His plays and performance texts include Carnival/Invisible, Iphigenia Among the Stars, Prototype 373-G, The Body Politic, and Paradise Sets In. He is a former founding artistic director of Whistler in the Dark Theatre, associate artistic director of Yale Cabaret, and managing editor of Theater magazine. Benjamin is a graduate of Middlebury College and Yale School of Drama; he originally hails from Houston, Texas.