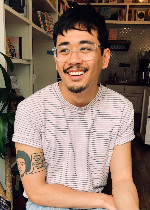 Anthony Veasna So is a queer boy, a Cambodian-American son of former refugees, and a graduate of Stanford University. From Stockton, CA, he was raised on stories of the Khmer Rouge Genocide that often, somehow, ended on a joke. His prose and comics have appeared in n+1, Hobart, and Ninth Letter. Currently, he is a PD Soros Fellow and an MFA Candidate in Fiction at Syracuse University, where he was awarded a University Fellowship and the Joyce Carol Oates Award for Fiction. He is at work on a novel and a collection of stories interspersed with comics.