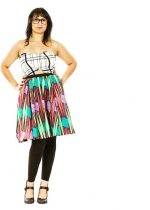 Anant Kaur is Brown and proud, a femme working-class survivor. Their writing appears in various publications including Feministing, The World Policy Journal, Bitch and make/shift magazines, and their self-published anthology Colored Girls. They is one of seven sex worker storytellers featured in the documentary film The Red Umbrella Diaries. They also graced the cover of the New York Times Magazine and was listed in Marie Claire magazine’s list of sex workers better suited for the presidency than 45. They has over a decade of experience organizing in low-income communities of color where they played a lead role in decriminalizing medical marijuana and ending the use of condoms as evidence of prostitution in New York State. They has a BA in Political Science from the University of Toronto and an MA in Public Policy and Administration from McMaster University. They currently lives in Toronto, Dish With One Spoon Territory, and is writing their first book of stories on sex work.