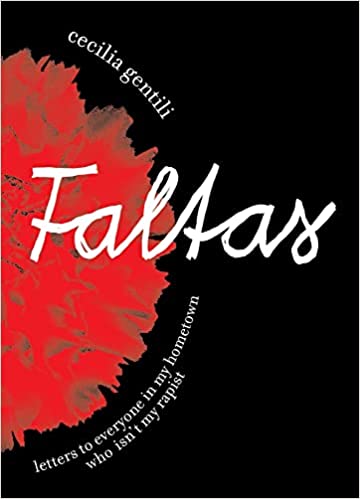 Starring in My Own Play: A Review of Cecilia Gentili’s Faltas: Letters to Everyone In My Hometown Who Isn’t My Rapist

Starring in My Own Play: A Review of Cecilia Gentili’s Faltas: Letters to Everyone In My Hometown Who Isn’t My Rapist

Told through a series of letters to the people Gentili grew up around, Faltas takes readers into 1970’s Argentina when she was young and trying to figure her life out, although it stops short of her actually transitioning and moving to the United States. It wasn’t an easy life in her small village. “I don’t think we had a kitchen,” she writes. “It was everything together. Just a big room where we slept and cooked and dreamed.” Her dad’s rarely in the picture, while her mom views her more as a peer than as her kid. And there’s the adult neighbor who regularly sexually assaults her.

As a young person only vaguely aware that she was trans, Gentili was taken advantage of by her next door neighbor. He was the father of a friend, and a popular singer. He also sexually abused Gentili throughout her early teens. She writes bluntly of how her abuser saw and exploited her vulnerability:

I remember the first time he laid eyes on me: I saw it, I saw he would give me the thing everyone else was denying me. He saw me as I was, and I didn’t have to explain how I felt inside because for him it was visible.

He saw I was Cecilia. He saved my life and ruined it forever.

Faltas showcases a world that’s bleak but alive. Gentili runs with a couple of local friends, hooks up for sex, and lives on the fringes of society.  She watches as neighboring families come and go, squatting in neighboring houses. One day she befriends a new kid on the block, but soon the friend’s gone without a trace, their family moving on to look for another opportunity. It’s a zero-sum game for these people, who fight and claw for anything they can have.

But the lives of queer people are what’s most striking about this book. Gentili wasn’t the only queer person in her neighborhood: she hit it off with Juan Pablo, another queer teen, quickly becoming friends and moving among the underworld, hooking up with people on the downlow and remaining invisible, lest they be murdered. They could be friends, writes Gentili, but not lovers:

When you met me in the forest it was like a duel of bottoms. You tried to be the man for a bit, but your heart wasn’t in it. You asked me to suck your dick (the gall!) and I tried for a while, but then I glanced up and saw the look of disgust on your face. Clearly this was not right… We were not the ones who sucked. We were more like those baby birds we had seen in National Geographic magazines, mouths open, waiting for their mothers to feed them, except instead of waiting for food we were waiting for dick.

Indeed, Faltas is brimming with Gentili’s sense of humor, which is what keeps this book moving. What could have easily become a grim book of horrors is instead packed with life and Gentili’s personality. She comes across like a gossipy older sister, as someone who’s seen it all and lived to tell the tale, and as a survivor. Her letters show different aspects of her personality: at times cracking jokes, at others showing a vulnerable side: when she reflects on being taken advantage of, the prejudices of her neighbors, the way her parents don’t quite connect with her.

But taken as a whole, the letters in Faltas don’t just show readers what her childhood was like. They also take us into the experiences that shaped Gentili: the friends, the abuse, the way her father would drift in and out of her life, and the ways she managed to keep a step ahead of her enemies.

As noted above, the book stops short of how Gentili came to the United States, of her coming out as trans or really any details of her life outside of her hometown. But it doesn’t need those: the act of writing a letter is a good way to let go of the past, of saying goodbye and setting yourself up to move on. And that’s what Faltas does best.

“No one,” writes Gentili, “is going to write a starring role for me. The only way I will get to be the star of a play… is if I write it myself.” And with this remarkable book, she’s done exactly that.

Faltas: Letters to Everyone In My Hometown Who Isn’t My Rapist

'The Road Home' by Michael Thomas Ford
'We Have a Pie' by Robert McVey
'Nina Here Nor There: My Journey Beyond Gender' by Nick Krieger