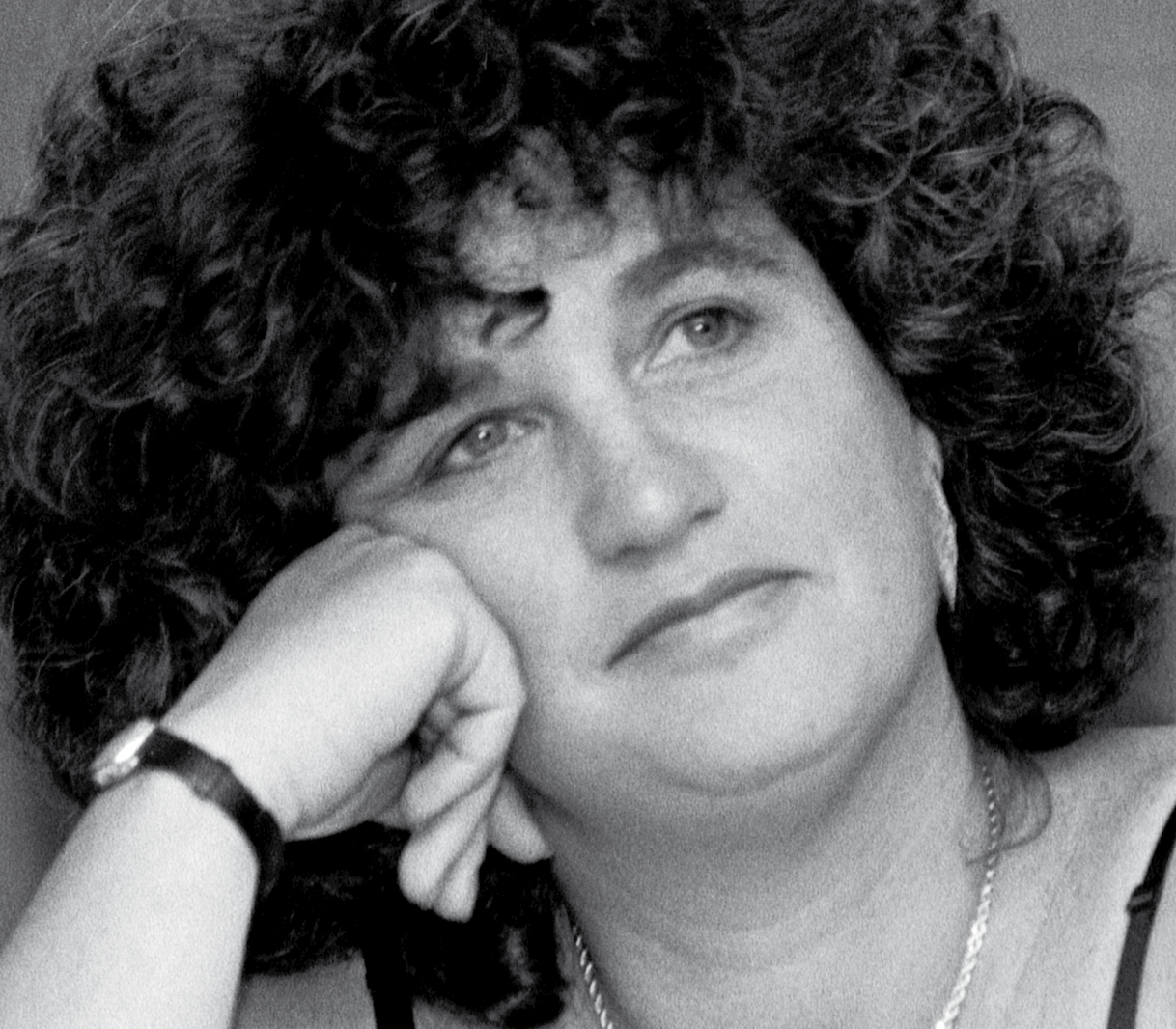 In Bed with Joan Nestle

In Bed with Joan Nestle 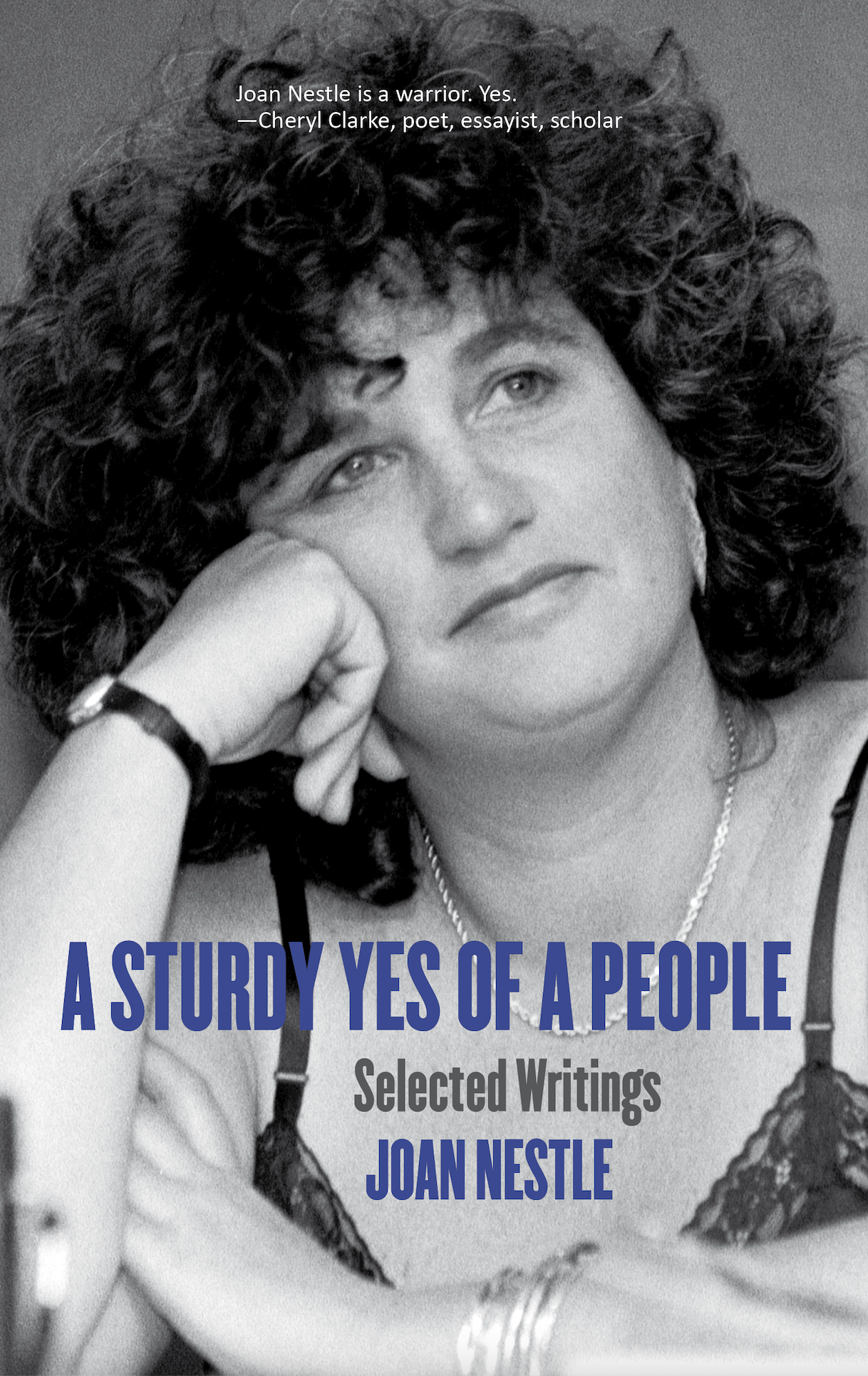 Excerpt from the Foreword by Carolyn D’Cruz to A Sturdy Yes of a People: Selected Writing by Joan Nestle

While Naarm/Melbourne became the most locked down city in the world during the COVID-19 pandemic, I went to bed with Joan Nestle several nights a week. If you hook up with her here, she’ll also touch you. Every time I read her erotica (or is porn the better word?), I relive the joy of legs spreading and lips parting, of feeling hot and getting wet, of bodies opening, holding on, and letting go. A lover of words, even as language fails, Joan Nestle finds enough space for flesh to speak. Besides taking us through bars and streets to all that steamy sex, Joan gifts us a political and scholarly heritage. She shares her methods for collecting archives, recording history, and commemorating places, events, and those people we need to listen to if we want to build a more just world. She guides us through the heritage of solidarity building between social movements. Her words beck- on us to pay attention to how narratives of desire, power, and justice are told—or not. Our work is to learn how to tell what’s missing and amplify those voices that have been too readily suppressed. Working from the margins, or “history from below,” Nestle is a shape-shifting storyteller who gracefully reminds us of “what we are in danger of forgetting” (p. 331).

Joan Nestle’s writing showed me how to exit the kind of feminism that could not see this, without losing my politics. My own eighties’ feminist experience was loaded with a uniformity in dress, style, and politically correct fucking that inadvertently took away my right to sexiness and liberated sex. When I passed from the straight to lesbian and queer world, Joan’s writing helped me find a new kind of freedom, a freedom that allowed me to feel within my own skin when I put on short dresses, V-neck sweaters, and made up my face with heavy eyeliner and lipstick. Like Joan, I’ve got my own black slip that can summon sex like magic. I’m yet to wear it on a panel like Joan did, though; and it will never be, and nor should it, as famous as hers. Joan is the Queen of Fems. She’s given so many of us a lifeline and the simple permission to flaunt it. Her pages are littered with joyful sexual communication through putting one’s self on: not submissively, as stereotype, or dismissively, as parody—but power- fully, as flamboyance. On rereading what Joan gathers in her own and others’ writing, I can better see how erotic taste connects with what is also a politics of style and a style of politics—a politics that underscores our own bent right “to be.”

Flaunting is one way of telling one another and the rest of the world who we want to attract and what we want to repel. It’s not a simple case of dividing one column for butch and one for fem, or any two markers we may contrast through inadequate understandings of masculinity and femininity. In Joan’s day there was also “butchy fem,” “femmy butch,” or “feeling kiki (going both ways)” (p. 103). The language has expanded today, while the mix-and-match-y style of bending rigid categories of gen- der through sexuality and sexuality through gender continues to be expressed through tattoos, flannel shirts, chunky watches, leather wristbands, and baseball caps. In other spaces there are bow ties, suits, and kooky cuff links (sexier with painted, manicured fingernails). Some of us still have our generic leather and denim jackets, surviving with their unique markings of wear and tear, badges and brooches, and sewn-on patches; it’s not just our hearts but our politics that are worn on our sleeves. I’m pausing so long on the politics of dress, for these are the signifiers that also attract street harassment and police profiling (which heightens when intersecting with markers of race and class). Joan Nestle reminds us that our “erotic heritage” (as she so beautifully puts it) includes police raids in bars, as was the case with the working-class Sea Colony in Greenwich Village that she frequented in the 1950s and 1960s. As she documents, in those days it was legal to arrest a person if they did not have three items of clothing that belonged to the gender they were presumed to be.

Nestle discusses these raids in “Lesbian Sex and Surveillance,” taking us through the intersection of her own working- class lesbian and queer history against the institutional forces that confined, patrolled, and violated the expression of nonnormative sexuality and gender. Looking at the number of times she has revisited her “fem quest” within a broader history of surveil- lance gives us some idea of the urgency in which she believed feminists needed to sort the telling of this stuff out. “Butch- Fem Relationships” was first published in Heresies: A Feminist Publication on Art and Politics in 1981 and appeared in the anthology Pleasure and Danger: Exploring Female Sexuality, which emerged from the notorious 1982 Scholar and Feminist Conference IX at Barnard College, New York City. That conference marked a significant moment of the “sex wars” within feminism, and we had our own versions of those debates across the ocean, where Joan would later come to live with her partner Di, in so-called Australia. Joan’s endnote accompanying the essay’s republication in A Restricted Country says, “It took me forty years to write this essay” (p. 109). The same issues are raised in “My Fem Quest” in A Fragile Union as well as “The Fem Question” in Persistent Desire. Each of these iterations underscore the recurring problem of how to tell a history that can remain true to those whose experiences are at the center of it. Alarmingly, the fights staged at and surrounding the 1982 Barnard conference remain within feminism and beyond, gathering force in public debates over the years where certain feminists are happy to form alliances with conservative and right-wing bodies intent on squeezing some of our folk out of existence.

Over twenty years ago, Joan reflected on how her friend Chelsea Elisabeth Goodwin, a transgender woman volunteering at the Lesbian Herstory Archives, opened the space for “an- other layer of lesbian history” (p. 209). Chelsea and her partner Rusty were housing Sylvia Rivera, whose name has now become eminently connected to the Stonewall insurrection of 1969, but at the time was “left behind by the mainstream respectable gay liberation movement” (p. 209). If the gay liberation movement and lesbian-feminist movement had “done things differently,” Joan argues, then “Chelsea and her comrades would not have to be fighting for their most basic rights in the 1990s” (p. 210). The alarm bells ringing through these words should have been loud enough to warn the same kind of feminists and respectable gay and lesbian lobbies how far under the bus trans, nonbinary, and gender-diverse folk would be thrown in the twenty-first century. When Joan rereads Esther’s story for the occasion of speaking to the trans community group Metropolitan Gender Network in 1997, she once again shares lessons in the constraints and possibilities for building solidarity: “If I know the dreams of only my own, then I will never understand where my impulse for freedom impinges on another history, where my interpretation of someone’s life is weakened by my own limits of language, imagination, or desire” (p. 213).

Somehow, Joan Nestle manages to hold together the contradictory positions that come with the experience of having “fought our way to sense” at the same time as learning to live through “shifting definitions” and “let[ing] go of certainty” (p. 281). How does she do it? How does Joan maintain her love for women while also navigating those situations when “the opposition between women and men stops being pertinent”? How does she maintain a lesbian herstory as she simultaneously navigates an historical terrain when lesbian, passing women, butch, and even our ideas of what is the “same” in a same-sex relation- ship keep shifting? Rereading Esther through her encounters with Chelsea and looking back at a time when the resonance of Esther’s own sense of self, gender, and desire would have been too easily dismissed through the particularity of how Esther, “want[ing] to be a man,” would have been read in a certain lesbian world, Joan manages to claim a lesbian-feminist perspective at the same time in which she “pushe[s] against lesbian-feminist boundaries of acceptable history” (p. 211). As some of us re- read, or read for the first time, texts like Radclyffe Hall’s The Well of Loneliness or Leslie Feinberg’s Stone Butch Blues, Joan’s rereading of Esther is like a guiding star for navigating what we can and cannot see and say about the intersections of gender, sexual- ity, class, and race in a particular time, place, or genre of ex- pression. Without using fancy academic jargon (not that there is anything inherently wrong with that), Joan’s own grappling with the history of desire shows how we are caught within struggles where identity categories are ineluctably politicized. Her first-rate scholarship on “[fighting] our way to sense” gives us clues for working on what is to be done and how we go about doing it (p. 281).

Having been constantly called to explain herself to strangers, Carolyn D’Cruz has become an expert on entanglements between personal, professional and political life. She is author of Identity Politics in Deconstruction: Calculating with the Incalculable and Democracy in Difference: Debating key terms in gender, sexuality, race and identity. She is also co-editor of After homosexual: Legacies of Gay Liberation. D’Cruz is a Senior lecturer in Gender Sexuality and Diversity Studies at La Trobe University.

Literature at the End of the World
Read This! Benjamin Garcia's Electrifying Thrown in the Throat
'Butch Queens Up in Pumps: Gender Performance and Ballroom Culture in Detroit’ by Marlon M. Bailey