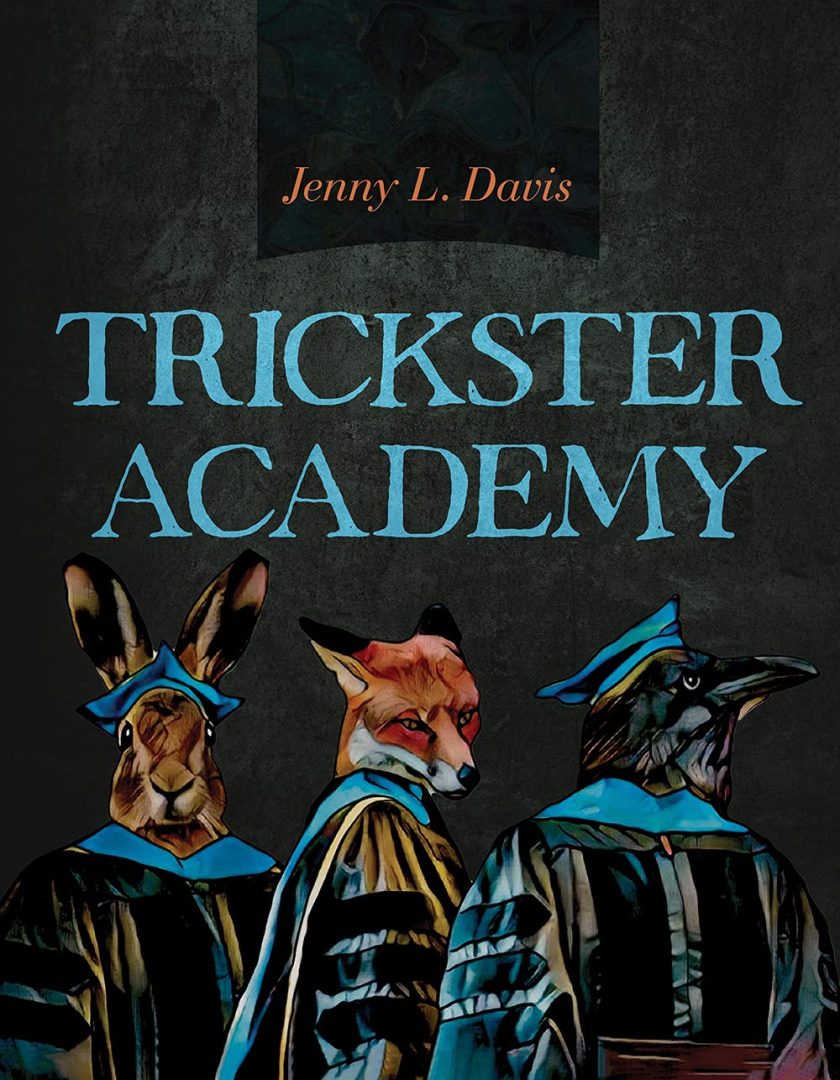 Read This! Excerpt from Trickster Academy by Jenny L. Davis

Read This! Excerpt from Trickster Academy by Jenny L. Davis 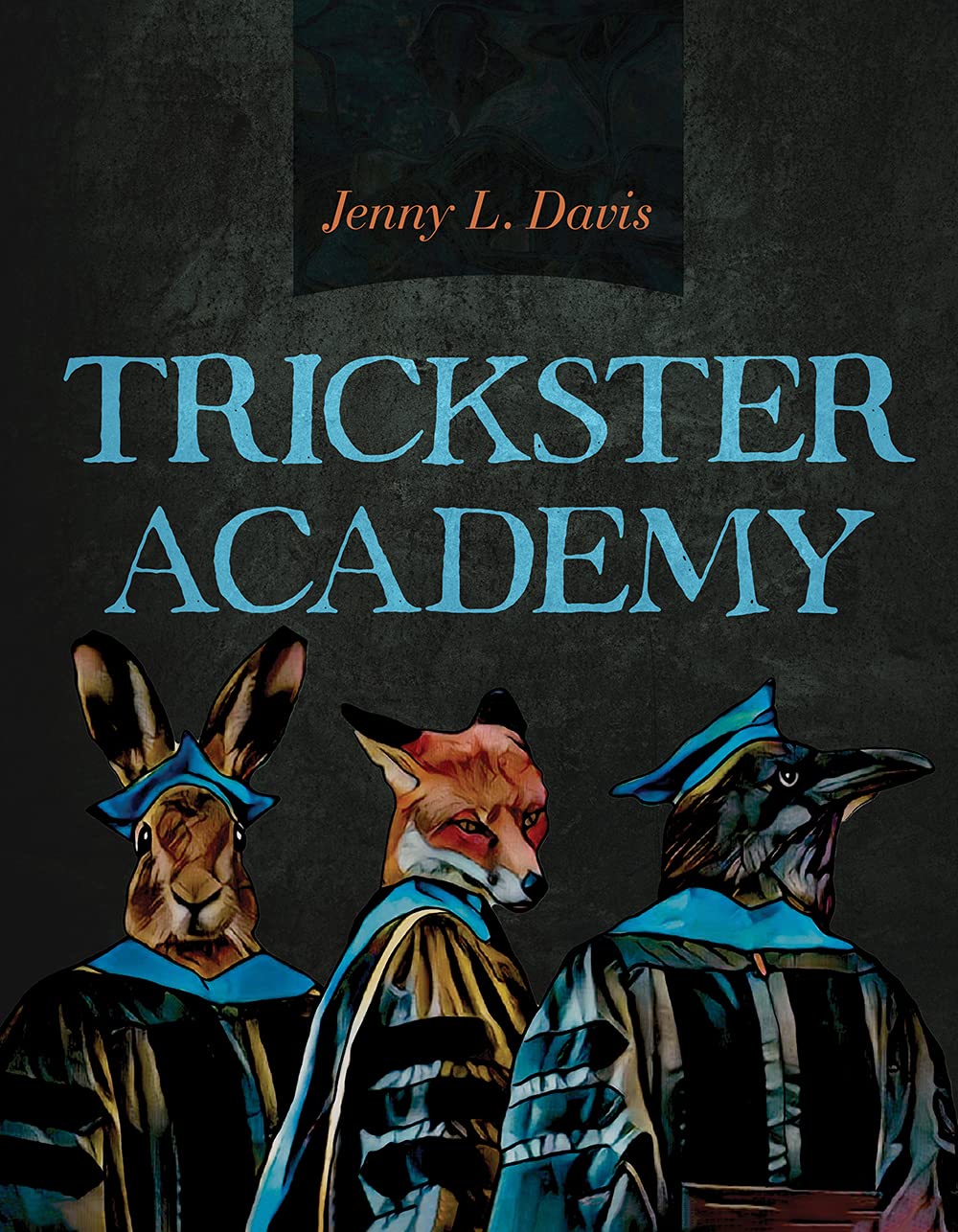 “Trickster Academy is a collection of poems that explore being Native in Academia—from land acknowledgement statements, to mascots, to the histories of using Native American remains in anthropology. Jenny L. Davis’ collection brings humor and uncomfortable realities together in order to challenge the academy and discuss the experience of being Indigenous in university classrooms and campuses. Organized around the premise of the Trickster Academy— a university space run by, and meant for training, Tricksters— this collection moves between the personal dynamics of a Two-Spirit/queer Indigenous woman in spaces where there are few, if any, others and a Trickster’s critique of those same spaces.”– University of Arizona Press

We leave home because somehow it seems
easier for the punches, slurs, and spit to be
coming from strangers instead of the people we’ve
known for our whole lives.

We leave home because there are only three other
queer people in this town and two of them
are dating each other.

We leave home because the three other queer
people in this town are tall or loud or masculine
or feminine of center, and we crave short or shy
or butch or femme in a hundred shades not found here—
or they are our cousins.

We leave home because, as a wise friend once
told me, “If you walk into a bar and have dated
more than three of the people there, it’s time to move
to a new city.”

We leave home because everyone says the city
is full of sin and danger and people who break all
the rules, and it is already dangerous for us here and, well, the
rest sounds wonderfully enticing.

We leave home because even though the Sunday
school teacher has been cheating on his wife with
the scorekeeper of his son’s baseball team for years,
we are the ones going to hell, and we’ve learned from
experience that the phrase “we’ll pray for you” is not kind.

We come home because it can be hard to
connect to people who have never hauled hay
in the August heat and humidity, never stuffed
their belongings into a pillowcase when the tornado
sirens went off.

We come home because sometimes it helps to know
that the person throwing punches and slurs comes from
a home where their father beats everyone smaller
than him, and so, in a way, with each strike
they are claiming you as family in the only way they know how.

We come home because the younger ones need
to see people who are like them, and if everyone
leaves there will always only be three of us in every
small town.

We come home because even when they rail
against who we are and who we love or
who we do (or don’t) worship, they can’t
deny we are part of them, can’t deny that the red clay between
all of our childhood toes is as binding as blood
and just as impossible to wash out

Just What Kind of Trickster Are You?

“Well, which are you—a finger or a thumb?”

I am
the cosmos translucent.

Although
most classification
of the unionids
is based
upon anatomy
of soft parts,
the shell
is the most
commonly encountered
structure.

Either the shell is all you have,
or the animal is alive
and
you may not be inclined
to sacrifice the animal
to look at the internal
structures.

Therefore,
for live material
you may only have
external shell
structures
to go by.

According to someone we all know, “real Indians” don’t:

They are full of shit.

How Turtle Got Her Shell

Did you know Turtle
didn’t always have
a shell?
She grew it
to keep the world
from crushing her
fortifying
her own body
to protect
her heart from
predators
transforming
ribs
vertebrae
clavicle
into carapace and plastron.
She knew
survival
meant preserving
softness.

1. If we don’t know our clan,
does that mean we can eat all of the animals, or none of them?

2. If my partner and I are both
from matriarchal communities,
whose family do we move in with?
(And who provides the deer for the wedding?)

3. If being decolonial means I should give up fry bread,
do I also have to give up my glasses? They’re the only
way I can see the beads to make my traditional regalia.

4. If I am Deer Clan on my mom’s side
but the sorting hat put me in Ravenclaw,
which animal do I put on my beaded medallion?
Can I put both?