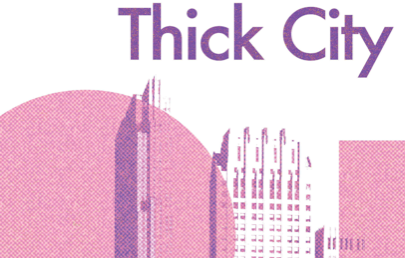 Read This! Excerpt from Thick City by Katie Jean Shinkle

Read This! Excerpt from Thick City by Katie Jean Shinkle 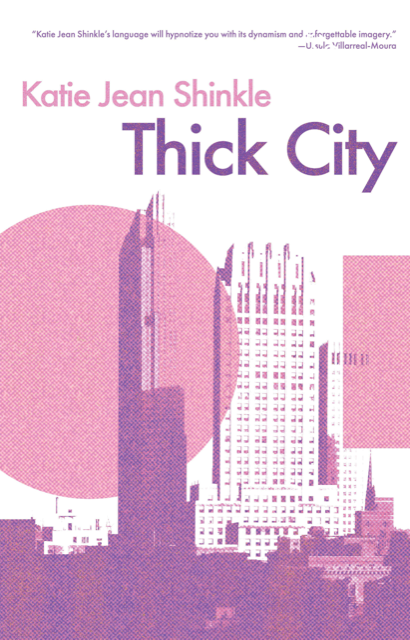 The following is excerpted from Thick City, a new collection of interwoven stories by Lambda Literary Fellow Katie Jean Shinkle.

“Thick City is an attempt at reconciliation of need and desire, the cyclical characters adjacent and sutured together create a constellation of a cityscape caught in its own fists. In the space of innovative prose, Thick City focuses on language and how language escapes, begins, reemerges, and lives.“

Meanwhile, my ex-girlfriend, R, and I finish our relationship like this: Five bamboo plants I gave her as gifts left outside on the doorstep of my new apartment. When asked why she left the plants, she says “Because fuck you that’s why.”

A pool party on the top deck of our old apartment building that will burn down soon, though we don’t know this yet. When the pool party begins, the water is too cold so no one is swimming, everyone loafing around longingly gazing at the water. –Someone will drown tonight—I tell R.

I am ending our relationship with a pool party and a prediction. The worst thing: Two drunk people get locked out of the building, have to sleep in Adirondack chairs.

There is a note on the new door to my new apartment in R’s handwriting: “Who was your New Year’s kiss?” The note is not meant for me but for my new roommate. The handwriting is not

R’s but someone else’s, a forgery, a thin disguise. Who was your New Year’s kiss? –It certainly wasn’t me—I say aloud to the note, which is lineated like poetry, taped with Christmas-themed gift-wrapping tape, all pine trees and golden garlands.

A few months ago, R and I were driving towards the mountains and the mountains were on fire. At a certain point, under an overpass on a one-way dwindling road, we were stopped by the authorities, large men in huge gasmasks, and were told to turn right around, the fire is spreading quickly, get away from this place, you don’t belong here.

But here was where the scene doubles back. Here was R in the moment before our apartment catches on fire. Here was R taking over the wheel as I passed out behind it on the mountain’s gradually thinning road just before we were asked to turn around.

R says she is a power bottom, and I am aware by the way she says yes, yes, when I am on top of her, yes, yes. When I say –yes, sir—I mean it. “Don’t call me sir, it drives me nuts, especially when you say it in public,” she says. When we are on the train, we see a mistress & a submissive acting out a power dynamic and I nod to R and say –see—see—do you see what I see—you see—.

I am in my new apartment by myself. R wants to come over and I let her and within an hour my fist is in her mouth. I try calling her a dirty little slut. –Talk to me, you little slut, tell me how you like it—and she pauses. “Who said you could call me a slut?” she says. The words echo and the echoes become echoes until echoes are not enough, never enough. I call her a slut and she stops moaning, moving, breathing, all her air is choked as if caught inside of her. –What happened—I’m sorry—are you OK—I’m sorry—is everything OK—I’m sorry—hello—hello—talk to me—I say. An hour later, she is gone again.

When I first met R, she almost stopped talking to me when she heard the kind of films I like to watch. She is very picky about these types of things  “Have you seen this film? That film?” she asked, and I said –no—and somehow, still to this day, I am ashamed I haven’t been pickier about my film choices. “It was almost a deal breaker,” she said.

R was leaving me to a soundtrack; a soundtrack differing greatly from the soundtrack of our lives. How music I never thought I would hear was playing itself throughout our apartment, an apartment about to burn to the ground. R was listening to the The Who’s Tommy. “I love Tina Turner in this film,” she said. And then, looking sideways at me, “Oh, you’ve never seen it, I forgot.”

One-by-one the bamboo plants show up outside the door. I don’t know where R is, and I can no longer ask who she is with or what she is doing because it is no longer any of my business.

We were sitting on the corner of the street, our apartment building on fire, and everything she owned was gone. She wanted me to drink her blood. There was an explosion. Her body was bloody and she offered her arm and said “Lick it.” She smashed her open wound into mine. My knees were scraped and bleeding, too. “Together forever,” she said.

But we will not be together forever. We were on top of the mountain and she said “No, no, no, its all wrong, this is too much, too intense, we have to end.” –I haven’t even given you much intensity—I said to the trees, to the mountains. R was no longer listening. “There is a possessiveness here I cannot wrap my head around, and I can no longer go there with you,” she said. She was the largest tree in the forest. She was a tree split two ways, an opening so large you can drive a car through. We were driving her new girlfriend’s car through the gigantic hole in the tree. We were driving through and I wanted to get out of the new girlfriend’s car and take a picture. I wanted to look up inside the innards together, what guts. I wanted to take a picture of us inside of the gigantic opening in this tree in the middle of my heartbreak. She refused to take a picture with me.