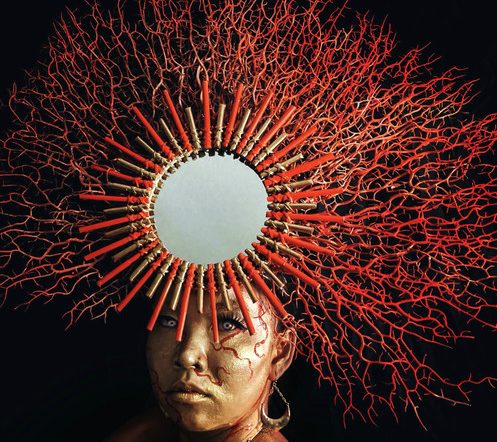 In Borderlands/La Frontera: The New Mestiza, Gloria Anzaldúa famously wrote about an abundance of borders—linguistic, cultural, “physical”—that cause rifts and dissociations within a people. In her essay, “How to Tame a Wild Tongue,” while a dentist is “pulling out all the metal,” he says of Anzaldúa’s tongue, “I’ve never seen anything as strong or as stubborn.” Anzaldùa refused to cage her first language, and in her writing, she often refused to translate it for easy consumption by white settler eyes. In this tradition, No’u Revilla wields her native Hawaiian language like an iron-willed blade. Still, there is also something queer and mystical about the violence at work in her debut collection, Ask the Brindled. Revilla’s poetry subsumes the violence imposed upon her language and land, and uses it to illuminate her upbringing, Hawaiian culture, and kinship with the natural world in an act of decolonial poetic lyricism.

In a recent conversation with some translator-friends, we began to discuss what constitutes translation in order to expand our understanding of what can exist within this unwieldy “genre.” Numerous poems in Ask the Brindled, including “Maunakea,” Revilla moves from English to Hawaiian: “In a world terrified of rain, / who will kiss my kupukupu mouth? // ‘O wai koukupunahine? / I carry these seeds like a child/ carries her grandmother’s blood. / ‘O ka ‘āina nō. ‘O ka ‘āina nō.” The Hawaiian phrases are repeated at the end of the poem, allowing their significance to unfold outside of traditional comprehension; instead, it reads like meditation or mantra, and as the notes suggest, it kind of is. For me, this approach also brings up interesting questions about the relationship between author and reader and how, in refusing to translate on the page, Revilla offers a choice to the reader—to move, emotionally, through the text, to allow tone and sound do the work of expression; to engage with thediscomfort of not knowing; or to do the work of translation on their own.

Content as I was with the first option, I still sought more, though my desire was a deeper relationship to the text. The questions Revilla repurposes are ‘Ōiwi writer and newspaper editor Joseph Nāwahī’s questions for the Kingdom of Hawai’i in 1895, and translate to: “Who is your mother? Who is your grandmother?” The answer: “The land, indeed.” These words incorporate the spirit of anti-settler and anti-desecration and extraction of sacred lands and waters, and Revilla weaves these concerns throughher poems like a seamstress. In “When you say ‘protestors’ instead of ‘protectors,’ she writes: “I would call it a trick, if it wasn’t so terrifying, how your mouth doesn’t move when you speak. Your smile, shiny as a church, but what kind of prayer could ever be trusted without evidence of a free tongue?”

Calling back to Anzaldúa, the role of the tongue here is reversed to evoke the invading “you’s” untrustworthiness. The tongue’scontrol and precision operate like the work of extraction: cold, calculated. And, afterward, used to spin a new narrative: “We are again, portrayed by you, the girl the Native the water the mountain who was “asking for it.”‘ Here, also, Revilla reflectsviolence, admitting the hard truth that “Sometimes I dream of tearing your throat wide open and finding there, where storiesshould be born, only bleedingbleedingbleeding.” More important than the act of violence, however, is the authentic desire torelate via storytelling—that the hope was to discover, inside the throat, inside the body, some kinship or relation. Kinship here, however, is neither found nor warranted: “…I keep hiding knives in my hair, the way my grandmother—not god—-the way my grandmother intended.”

Revilla also experiments with language on the page through spatial forms, an Oiwi abecedarian, typographic inventiveness, and erasures, while queerness, fertility, and the sacred pulse through the lines. In a prose poem fable, “Eggs,” Revilla writes: “There was once a girl with eggs in her eyes. Hard shell, her. They said she was really a lizard…Years passed and she never had a son. Years passed, never a daughter. Years of the island swelling with songs of a beautiful woman, What a waste, what a waste.” Later in the collection, another prose poem, “Myth Bitch,” draws on similar themes: “When I sleep with a new woman my mother whispers fetus into her fingers and sews my mouth shut. The fetus of a witch becomes a bitch. No daughter of hers will sleep like that.” Revilla, grappling with queerness and lineage, imbues her work simultaneously with the beautiful mythic and the burden of shame, but the former wins out: “Mother, I am the myth bitch you dream about.”

In the collection’s final section, Revilla leans into themes of the familial—blood and chosen, lost and found. In “The ea of enough,”—what I want to call the collection’s triumphant poem—the poet celebrates collective lineage: “a story we must tell //// that we grew our daughters / in moonlight //// glistened their foreheads in salt/ crown of bone…daughters grown/ to raise their heads //// to trust the song of rupture.” As Revilla goes on, she shifts to direct address, “you are shattered & many-named/ believing no one knows /// how to call you home/ home is a ravaged thing // we wish // you could see / the peace in the pieces/ our bodies ungoverned by fear.”

A hard lizard-skin makes up the casing of this collection. Throughout, Revilla is direct—these are poems of a queer Hawaiian woman, unafraid to look violence, colonization, and complex family relations squarely in the eye—and to articulate a life, a collection of lives, with care and poetic dexterity. Revilla gives rage space to roam, but these poems also burgeon with tenderness, even as they grapple with destruction: “(re)covering love songs i am (re)covering love/ as i paddle past a line/ ofdead bees, puffer fish, discarded lei in the ocean.” But even as that brief tenderness unfolds, one mustn’t, one couldn’t, forget to see the hard truth of these poems: “The hurt is origin story. And spreads.”

'James Baldwin: The Last Interview and Other Conversations' by James Baldwin
'Another Country: Queer Anti-Urbanism' by Scott Herring
‘A Certain Loneliness’ by Sandra Gail Lambert