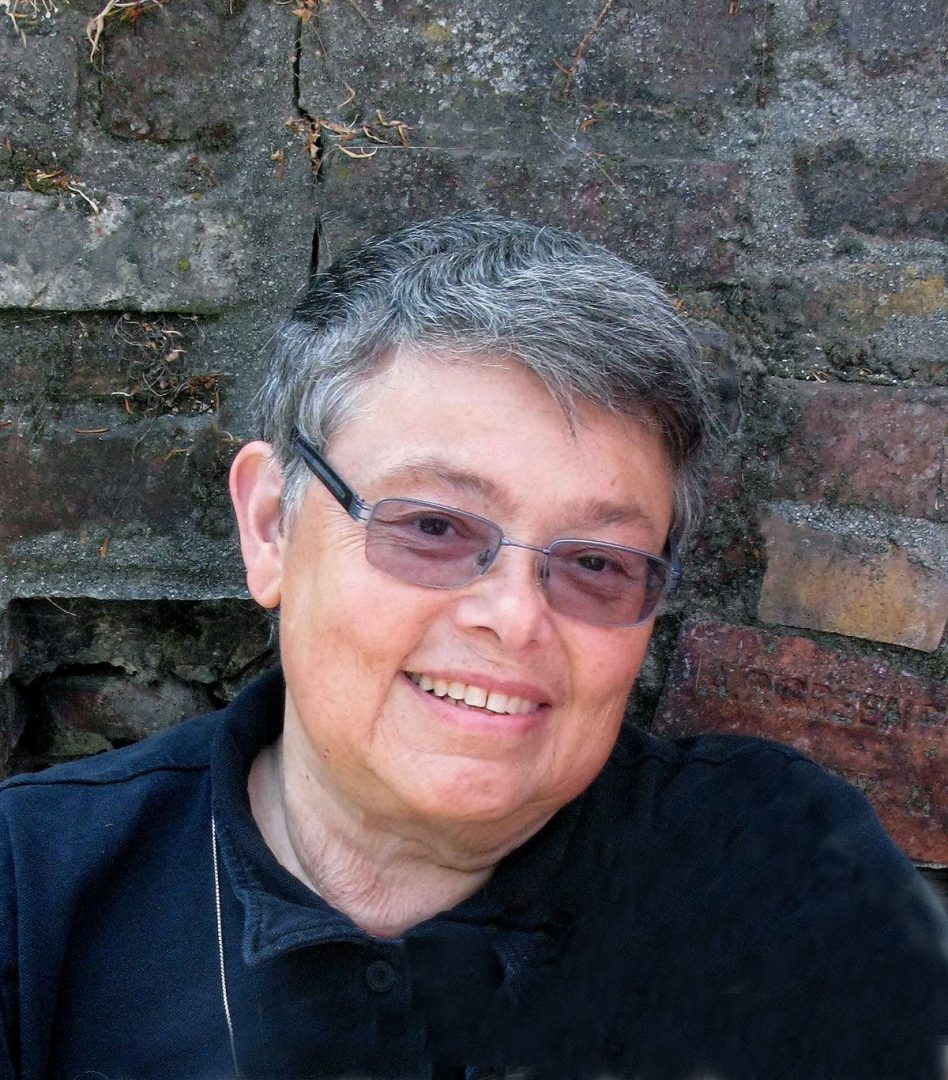 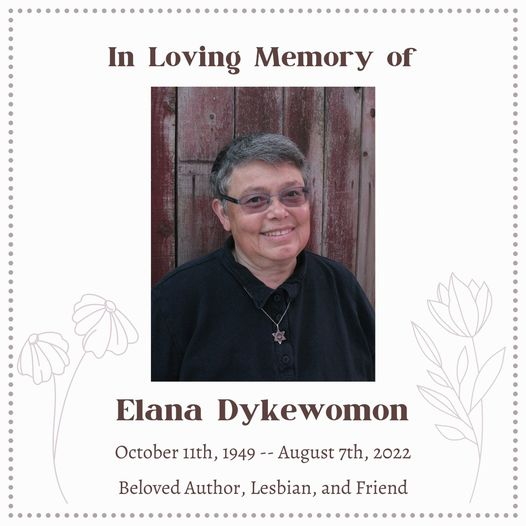 On August 7, 2022, just minutes before the live streaming of her award winning play, How To Let Your Lover Die, began, Jewish lesbian poet, novelist, editor, and agitator, Elana Dykewomon died. Most fitting, her death occurred on the Jewish fast day of Tisha B’av—the ninth day of the Hebrew month of Av, a day of mourning and commemoration for the destruction of two temples, among other calamities.

Elana had been wrestling with esophageal cancer since September of last year, and she suffered through chemotherapy, radiation, and other treatments. She had been rewarded with moments of hope that the tumor had shrunk, and was periodically able to take sips of cold soup or ginger tea through her feeding tube. But eventually, cancer being cancer, Elana succumbed.

Throughout Elana’s ordeal, she worked—on revisions to that play; on a memoir about her time as an institutionalized adolescent; and, perhaps most generously for those of us in her large and diverse lesbian community, her warm and articulate posts to her Caring Bridge website.

Me, I had the distinct honor and pleasure of working with Elana on her penultimate public project. In 2019, at the gentle prodding of my publicist, Michele Karlsberg, and with the full hearted support of its publisher, Julie R. Enszer, Elana and I co-edited a special Jewish lesbian issue of Sinister Wisdom: To Be A Jewish Dyke in the 21st Century. It was an especially meaningful experience for me, not only because I got to help put together a volume of work that reflected my own personal tastes and concerns—but also because I got to work closely with Elana, whom I had known since our early twenties when we both lived in that bastion of mid-20th century lesbian culture, Northampton, Massachusetts.

Elana first appeared in the Pioneer Valley—flannel shirt, newsboy cap, brown quart bottle of Narragansett Black Label beer in hand—reading remarkable, political, deliciously sexual lesbian-centered poems—everywhere. When we met, she was finishing a novel which was to be published by Daughters Inc., the same press which would also publish the first edition of Rita Mae Brown’s Rubyfruit Jungle. Daughters published Riverfinger Women under Elana’s birth family name, Elana Nachman, but by 1976, when she published her anthology of stories and poems, They Will Know Me by My Teeth, with Megaera Press, a lesbian publishing house she helped to found in Northampton, she had become Elana Dykewomon. And one more thing—it was stated clearly on the cover of They’ll Know Me by My Teeth that it was “to be sold and shared with women only”—a radical leap, even in the emerging world of lesbian and feminist publishing.

Her directive was one of Elana’s many clear and deliberate political choices. She maintained that certain spaces in Northampton, Lesbian Gardens in particular, be preserved for lesbians only. She chose to read for lesbian-only audiences. And she was definite about this. She also helped create the Women’s Film Coop—where films as diverse as Leontine Sagan’s Machen in Uniform (1931) and Jan Oxenberg’s Home Movie (1973) were available for many of us to view for the first time.

Elana left the Pioneer Valley for other lesbian communities in the late ‘70s, settling first in Coos Bay, Oregon and then moving to Oakland, California, where she worked as a typesetter and a college professor in order to support herself. But all that time, Elana worked as a poet, an essayist, and fiction writer. In 1997, she published her Jewish lesbian historical saga, Beyond the Pale with Press Gang Books. Risk, published by Bywater Books in 2009, is about family, addiction, and community. For many writers, that might seem enough. But in addition to these books, Elana Dykewomon published three volumes of poems and short stories, and from 1987-1994, she brought her considerable editorial talents and vision to Sinister Wisdom.

Throughout those years, Elana worked to maintain communities that reflected all her identities. She was an outspoken advocate for the Palestinian people in the face of the Israeli government’s apartheid practices. She was an active participant in the organization Old Lesbians Organizing for Change, and until September of last year, she ran a monthly writing group for cancer survivors. She was a tough critic and a generous, warm hearted friend, absolutely committed to the creation and preservation of lesbian culture. I am very proud to have been on a small part of that adventure with her.

‘They May Not Mean To, But They Do’ by Cathleen Schine
'Taking My Life' by Jane Rule
'Deviations: A Gayle Rubin Reader' by Gayle S. Rubin