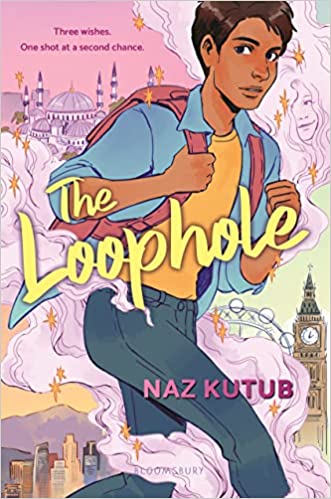 Wishing for Love and Finding Family: An Interview with Naz Kutub about The Loophole

Wishing for Love and Finding Family: An Interview with Naz Kutub about The Loophole

When one first hears the story of Orpheus and Eurydice, they often lament, “Why, oh why, did he look back?” In the myth, Orpheus attempts to recover his wife Eurydice from the underworld.

He loses his chance by disobeying the conditions set forth by the gods: he turns around to see his love before they complete their ascent, and a tragedy is born. Every adaptation has their own point of view on Orpheus’ choice. In the film Portrait of a Lady on Fire, characters suggest that perhaps he turned so the lovers could say good-bye on their own terms.

In Hadestown, the Broadway musical retelling of the myth, the focus lies instead on the power of art and the destructiveness of gods gone awry.

A new young adult novel titled The Loophole (Bloomsbury YA) from debut author Naz Kutub offers a fresh take on the tale. In it, a gay Muslim teen travels the world in search of his ex-boyfriend, prompting the reader to wonder, “How far would I go for love?” and “What might I find when I get there?”

“There is something so poignant about how desperate he was to get his wife back–and how stupid [he was],” said Naz Kutub, speaking about Orpheus in a recent virtual conversation.

A Love Worth the Risk

Funny from the first page, The Loophole is the escape many of us need right now. The teen protagonist, Sayyed, is joined on his adventures by a drunk, possibly magical heiress who grants him three wishes. Instead of a magic carpet, the potential genie, Reggie, rides in a private jet with a bartender named Trent.

Sayyed and his handsome ex-boyfriend Farouk have the kind of love many would fight for. Farouk helps bring careful, scared Sayyed out of his shell. They have dreamy dates to Griffith Observatory; they exchange rings, books, and promises to room together in college. Farouk even charms Sayyed’s family when he meets them as a “friend,” bringing Sayyed’s mom her favorite chai.

It is understandable why Sayyed searches for Farouk–and why he dated him in the first place, despite fearing what would happen if his tyrannical father discovered the truth. In fact, after Farouk disappears, Sayyed’s father finds out Sayyed is gay. His father beats him and kicks the teen out of the house. Homeless and alone, Sayyed connects with the mysterious Reggie and begins his epic adventure.

The Truths Behind the Tale

Kutub knows the story well. Much of The Loophole is based on his life (minus the ponytailed genie). “Everything about Sayyed, his mom, his sister, his dad–that was basically me and my family,” said Kutub. “The travels–places I’ve been to. And, you know, chasing about this ex-boyfriend, that was me and my ex-boyfriend. He was always running off trying to do something good for the world and I’m like, ‘Can we just stay and be together?’”

Writing this book offered Kutub a challenge to tell the truth about his life and experiences. “I wanted to see if a story about myself was worth writing.” Worthy of writing and reading, The Loophole has garnered praise from Kirkus Reviews which says the book is, “an intense read that’s packed with adventure, humor, and lots of soul.”

“I didn’t have to make up a lot. I didn’t have to lie. I think a lot of truth went into this book, the truth of me,” Kutub said. “It’s just unreal that people will be reading about me, how I grew up, about my dad.” As funny and sweet as much of the book is, it contains some hard truths as well. Sayyed’s father is abusive, as was Kutub’s father, he said. “The one thing I never did was stand up to him and come out to him and all that.”

There was one moment in my life, a few years before [my father] died: I was sitting next to him, contemplating telling him I’m gay–to see his reaction–because I wanted a reason to truly hate him and never talk to him again–to see if he really was against it. But I was also torn because if he was accepting, then I had to learn to love him, and so I said nothing.

I was less worried about rejecting him and not talking to him again than to have to learn to love him. Since he died, I needed a way to find closure with not having done that, not confronting him. I think writing the ending of this book was me finding closure with my dad and forgiving myself for not doing that.

Kutub ran away from home at 17, leaving Singapore and ending up in the United States. Kutub knows that it is “still dangerous for a lot of teens to come out, especially teens in countries where they reject homosexuality.” One of the moments that sparked him to write this book was seeing a photograph of two queer boys who were thrown off a building by ISIS.

“I want all queer teens out there who feel like it’s unsafe [to come out] to just hold on. It’s okay to wait until you have the proper support system. Hold on. It will get better. We’ll be waiting for you to join our family.”

The Opposite of Orpheus

A young Kutub had to leave his family to find his own happiness. In the book, Sayyed leaves on his journey with Reggie ostensibly to find his ex, but Kutub thinks that Sayyed left due to his own selfishness. “He was so afraid of being alone that he was willing to throw himself all the way across the pond to find this ex-boyfriend. That was his fuel–to just not have to be alone. That’s funny because he wasn’t alone the entire trip except for one moment where he lost Reggie on the streets of Istanbul.”

Obsessed with Farouk, Sayyed doesn’t appreciate Reggie, his best friend Dzakir, or his mother or sister who love him very much. Appreciated or not, Reggie has a way of making any situation fun–at least for the reader. Kutub had the most fun writing Reggie, who he calls a “girl version of Jack Sparrow.” The author tells people, “Sayyed was me when I was young and Reggie was me after I discovered alcohol.”

He adds, “I don’t drink a lot. I really don’t, but I just think I’m more fun as an adult, since I let go of my fears. So it’s kind of like a metaphor of learning to let go.”

Tightening his grip, Sayyed wishes for Reggie to bring him to Farouk. He is willing to travel through hell to find him. Unlike Orpheus, Sayyed’s challenge is not to walk out of the underworld without looking back, but to look around and see what he already has, the chosen family he can create, and how delightful–and worthy–he is, with or without a boyfriend.

Before The Loophole, Kutub wrote serious stuff, not knowing he was funny. “And now I can’t write drama ever again. I have to have some levity.” Might a little gay levity on a journey for love be what you ask for right now? Wish granted.

'My Sister Chaos' by Lara Fergus
'Through the Valley of the Nest of Spiders' by Samuel R. Delany
'Burn It Down: Women Writing About Anger' Edited by Lilly Dancyger

Laura Carpenter is a Lambda Literary fellow writing and living on Dena’ina land in Anchorage, Alaska. Learn more at lauracarpenter.gay.