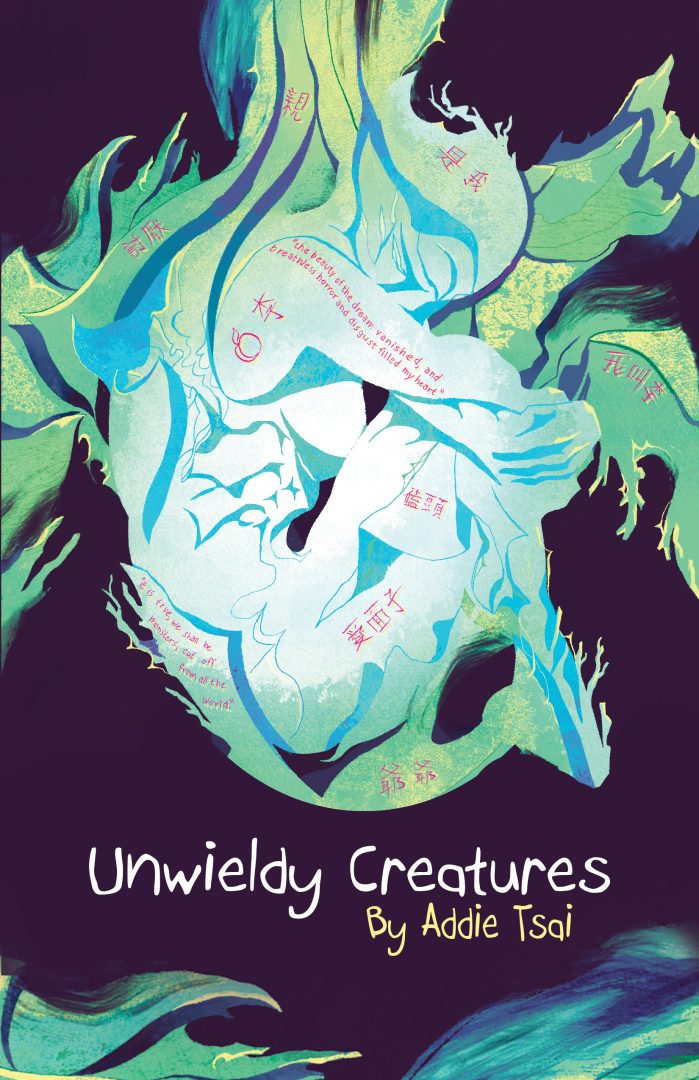 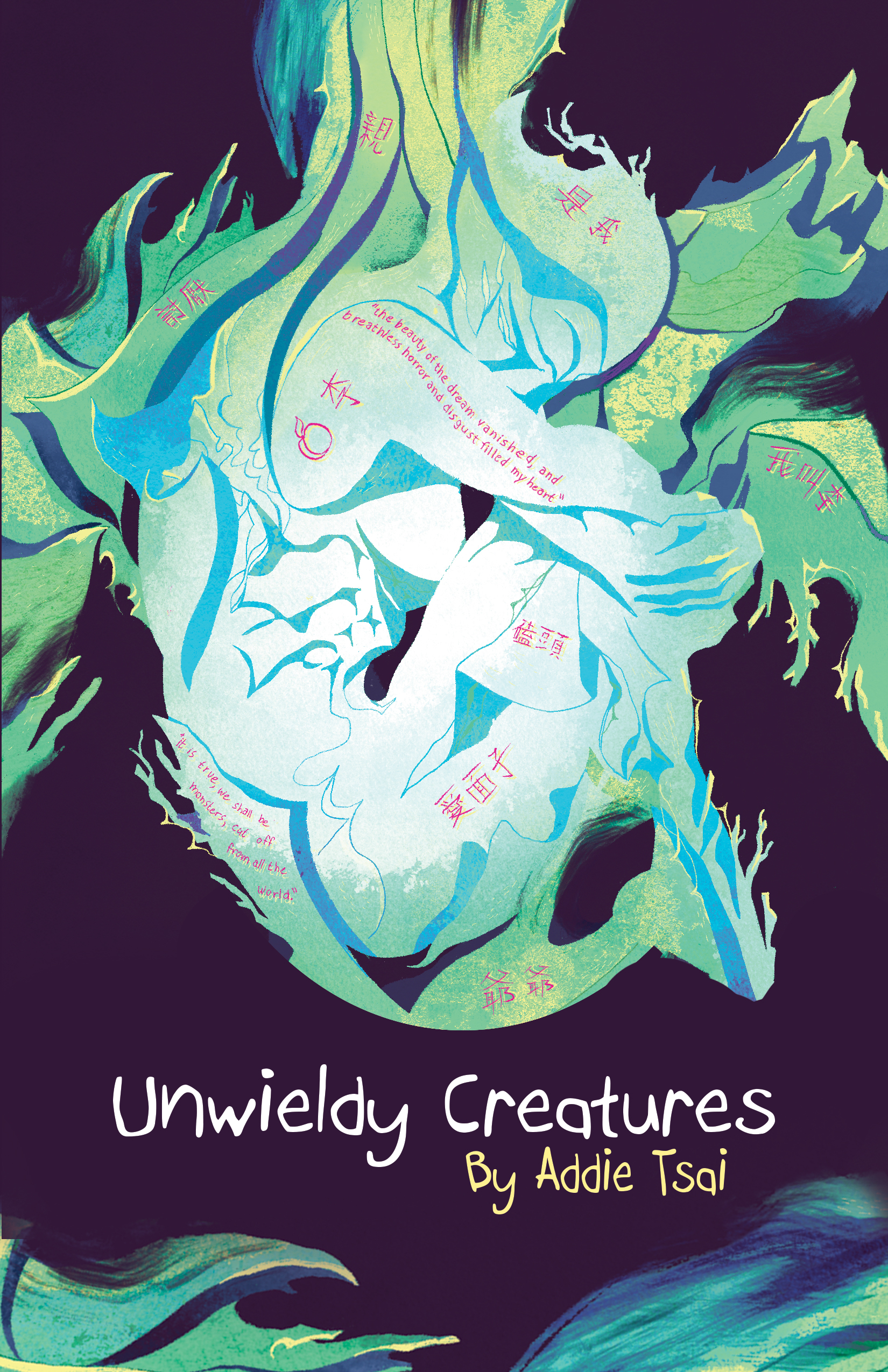 The following is an excerpt from Addie Tsai’s Unwieldy Creatures, forthcoming August 2, from Jaded Ibis Press. A biracial, queer, genderswapped retelling of Mary Shelley’s Frankenstein, Tsai’s Unwieldy Creatures follows the story of three beings who all navigate life from the margins: Plum, a queer biracial Chinese intern at one of the world’s top embryology labs, who runs away from home to openly be with her girlfriend only to be left on her own; Dr. Frank, a queer biracial Indonesian scientist who compromises everything she claims to love in the name of science and ambition when she sets out to procreate without sperm or egg; and Dr. Frank’s nonbinary creation, who, painstakingly brought into the world, is abandoned due to complications at birth that result from a cruel twist of revenge. Plum struggles to determine the limits of her own ambition when Dr. Frank offers her a chance to assist with her next project. How far will Plum go in the name of scientific advancement and what is she willing to risk?

Excerpt taken from the section of the novel when Plum, a biracial Chinese girl living in a small American town, begins to realize that her home with her father is no longer emotionally and physically bearable as her relationship with her girlfriend Ko, deepens. It is this realization that ultimately leads her to Dr. Frank and into her web of deceit—and revenge—gone wrong.

Ko smelled of lavender and Tide. Sometimes, when I kissed her at night, I could still taste a faint mixture of sauces on her tongue that I imagined garnished her dinner just hours before—hoisin, soy, sesame, fish, hot mustard. And always that added touch of kimchi, her favorite snack for any time of day. We shared boba and Korean barbecue together and stories of the annoying white liberals in Vermont. When we first met, I learned that one of my favorite pastimes—count the POCs—was a game she played, too. We compared how many plastic bags our parents kept under the sink, plastic containers above the stove that once held takeout pho from the one Vietnamese restaurant in town. What a gift it was to share time with someone who knew something of what my life was like. Before Ko, I’d never been kissed by anyone before. Boys stayed away from me, which I was grateful for; besides, I was lucky enough to have a boy’s shape (boxy waist, flat chest, broad torso) so as not to attract them anyway.

By the time I learned enough about myself to know it was the shape, scent, and feel most often ascribed to girls that made my skin itchy with want and curiosity, I was old enough to realize if I approached the wrong one, things could get scary. I asked out a girl once at a café, where I had been sketching for hours. She was a barista and had silky black hair that fell halfway down her back, eyes shaded turquoise with dramatic eyeliner, and an understated but stylish look. The way her bottom hugged the back seat of her jeans excited me. I wanted to finger her curves. I stayed until closing hours, and when I walked out of the café to my car, I saw the barista standing next to the dumpster, emptying the trash. It was late. The sky was black, lit minimally with just a few streetlights sporadically placed by the sidewalks. When I walked up to see if she wanted someone to walk her to her car, she smiled at me. Initially, I thought the smile was for me, but I realized only too late it was for her boyfriend who came up to me from behind and threw me in a chokehold, shouting slurs and threats. That was the last time I ever approached a girl.

Even though Ba cropped my hair short, a style identical to his own, and made me wear his hand-me-down jeans he kept from his boyhood days, I was smart enough to know that didn’t mean he’d accept this. I knew he didn’t care whose body I lay with in the sweaty dark night, not really. What mattered more was what the 阿姨[1] and the 叔叔[2] and the future employers saw when they looked at me. That I represented him. What they saw must be like everyone else. He didn’t leave everything he knew behind to come to America only for me to be so ungrateful as to want what was against nature and the world. I knew what he would say. Life not fair. Just the way it is. We can’t always have what we want. He never said this to me directly. He didn’t have to.

By the time the ceramics class ended, Ko and I were as entwined as a strand of DNA—a coil of endless togetherness. Somehow, no matter how much time we spent together, hiding out in libraries or cuddling on a blanket in all the city parks we’d convinced ourselves were safe, it was never enough for either of us. We could both feel the pressure build as we tried to make the impossible happen. The more we clutched to each other for survival, away from Ba and Ko’s parents, the closer the threat of discovery came.

Ba ultimately made our decision for us. Even if he didn’t realize it.

One day, I was out with Ko and lost track of time. I came home fifteen minutes late for dinner. My lies didn’t measure up, but hard as he tried to squeeze the deeper truth out of me, I wouldn’t reveal what he would see as a sick, twisted black mark. I just couldn’t. I can still feel the pieces of plaster that splintered my back as Ba slammed me against the dining room wall, our stir-fry and 牛尾湯[3] going cold.

“Tell me now. Where were you? Who you with? Some boy? Who?” With each word, another slam, another reinforcement I would never be able to tell him it was Ko who confettied the world with peonies, their pinks tickling my skin. If he was like this about a boy, I couldn’t imagine what he would be like if he learned I’d snuck off with a girl. I shuddered to even think of it.

Before long, he exhausted himself and went to bed, shouting 討厭[4] to no one in particular, although I knew it was a curse meant only for me. I wouldn’t discover what it actually meant until much later. I always assumed it meant some version of bad girl or disobedient, or some other term for a misbehaving child. Later, I asked a fluent Chinese American I knew if she was familiar with the expression. She told me there wasn’t an exact English equivalent. But I saw the O of shock her mouth formed that she tried to quickly disguise when I revealed it was my Ba who called me that every time he scolded me, often with no words to accompany it, just the heat of rage-tinged touch. That face alone motivated me to look it up in the English-Mandarin dictionary at the library sitting next to Ko one afternoon. It had never occurred to me to do so before. Perhaps I was too afraid to know the barbs he was willing to prick me with. Even if he didn’t know that the secret I held was carved with the body of a girl, that moment alone convinced me he would always see this egg I tried to hold so carefully against my chest (so as not to ruin it) as foul, monstrous.

Ko read over my shoulder, and after we both read the same words, that it meant to loathe someone or look at a person with disgust, she held my hand underneath the table, resting her head against my shoulder.

I knew then what I had to do.