Introducing the 2022 Lammys Host and Presenters

Introducing the 2022 Lammys Host and Presenters 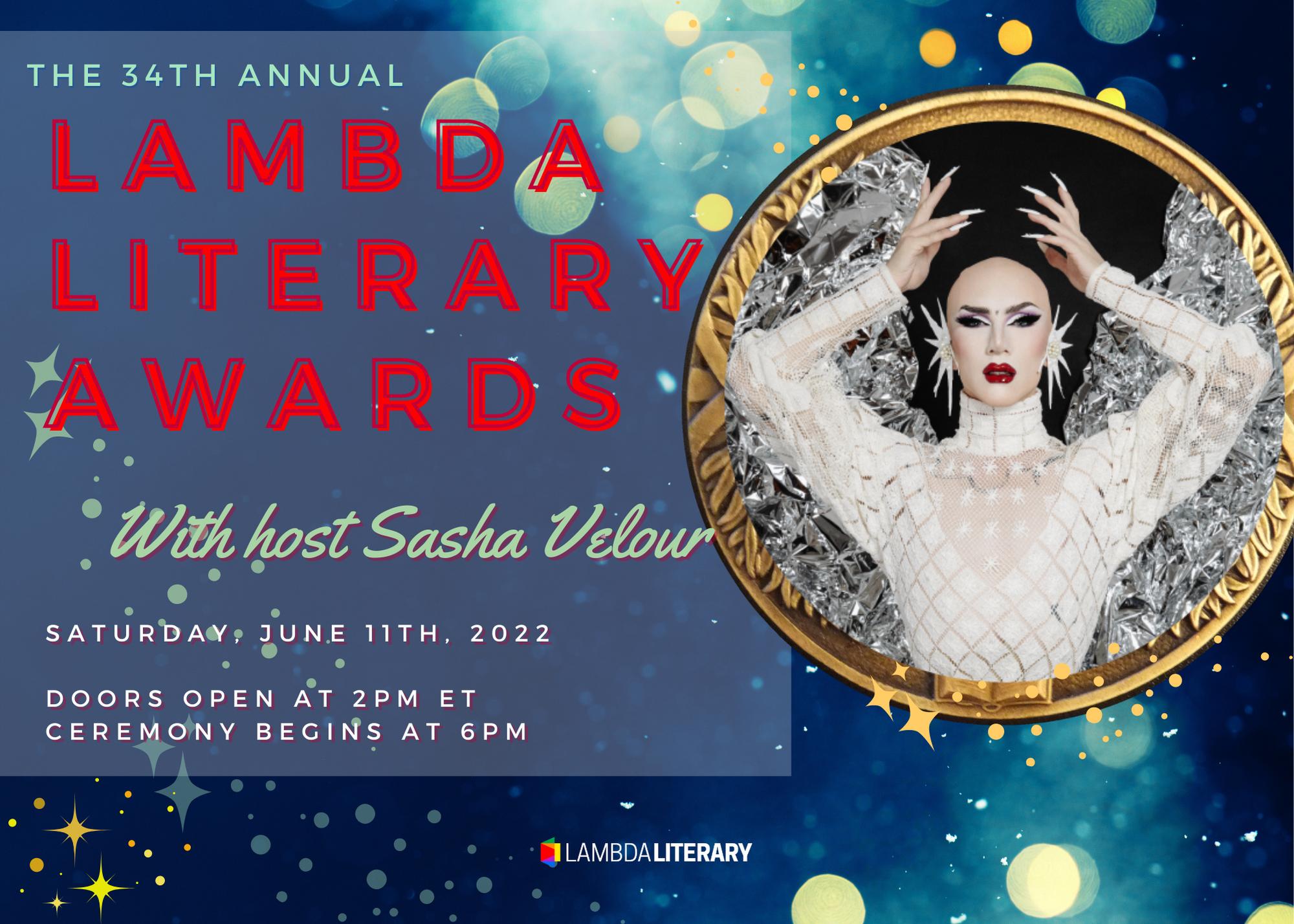 The 2022 Lambda Literary Awards are happening Saturday, June 11th and we are thrilled to announce the evening’s ceremony will be hosted by Sasha Velour!

Sasha is a gender-fluid drag queen and visual artist. As a drag artist, Velour has toured the world with her acclaimed one-queen drag spectacular Smoke & Mirrors, bewitching audiences on 3 continents. The multi-media drag revue she created, NightGowns, has recently released 2 free films available online. Velour also executive produced an award-winning original series of the same name with director Sophie Muller available on The Roku Channel which The New York Times hailed as being “among the most life- affirming shows you could find on any platform.” Through her genre-defying work, Velour is creating new models for drag as art, which Fast Company says is “disrupting the business of drag.” As a public speaker, Velour has spoken at colleges, universities, The Smithsonian, and on behalf of the US State Department abroad. In 2015, Velour was crowned the winner of the 9th season of the Emmy-Award winning RuPaul’s Drag Race. Velour’s first book, The Big Reveal, is an illustrated manifesto on drag as art, community, activism, identity…and occasional disaster. It is due for a 2023 release with Harper.

Raquel Willis is a Black transgender activist, writer, and media strategist dedicated to elevating the dignity of marginalized people, particularly Black transgender people. Throughout her career, Raquel has held impactful positions like Director of Communications for The Ms. Foundation, executive editor of Out magazine and a national organizer for Transgender Law Center (TLC).

In 2018, she founded Black Trans Circles, a project of TLC, focused on developing the leadership of Black trans women in the South and Midwest by creating healing justice spaces to work through oppression-based trauma and incubating community organizing efforts to address anti-trans murder and violence. During her time at Out, she published the Trans Obituaries Project to highlight the epidemic of violence against trans women of color and developed a community-sourced 13-point framework to end the epidemic. This project won a GLAAD Media Award.

Raquel is a thought leader on gender, race, and intersectionality. She’s experienced in online publications, organizing marginalized communities for social change, non-profit media strategy, and public speaking while using digital activism as a major tool of resistance and liberation.  Raquel is currently working on her debut memoir detailing her coming of identity and activism.

Meg Elison is a Philip K. Dick and Locus award winning author, as well as a Hugo, Nebula, Sturgeon, and Otherwise awards finalist. A prolific short story writer and essayist, Elison has been published in Slate, McSweeney’s, Fantasy & Science Fiction, Fangoria, Uncanny, Lightspeed, Nightmare, and many other places. Elison is a high school dropout and a graduate of UC Berkeley.

Meg Elison is a Philip K. Dick and Locus award winning author, as well as a Hugo, Nebula, Sturgeon, and Otherwise awards finalist. A prolific short story writer and essayist, Elison has been published in Slate, McSweeney’s, Fantasy & Science Fiction, Fangoria, Uncanny, Lightspeed, Nightmare, and many other places. Elison is a high school dropout and a graduate of UC Berkeley.

dave ring is a queer writer of speculative fiction living in Washington, DC. He is the author of The Hidden Ones (2021, Rebel Satori Press) and numerous short stories. He is also the publisher and managing editor of Neon Hemlock Press, a co-editor of Baffling Magazine, and a 2013 Lambda Literary Fellow. Find him online at www.dave-ring.com or @slickhop on Twitter.

Jacqueline Goldfinger (she/they) is currently the Chair of the 2022 LMDA International Performing Arts Conference. They will be the Visiting Professor of Theatre at Indiana University in the 2022-23 academic year. They are the author of the books, Playwriting with Purpose: A Guide and Workbook for New Playwrights and Writing Adaptations and Translations for the Stage both published by Routledge. Their plays include Babel which was a LAMBDA Lit Award finalist, on the Kilroy’s list, and winner of the Generations Award and Smith Prize. They’ve also written the play Bottle Fly which won the Yale Prize and the stage adaptation of Madeleine L’Engle’s A Wind in the Door. Their work has been produced around the world by The John F. Kennedy Center for the Performing Arts, BBC 3 Radio (UK), Contemporary American Theatre Festival, Gate Theatre (New Zealand), among others. Their new opera, Alice Tierney, will world premiere at Oberlin Opera in 2023. www.jacquelinegoldfinger.com

Mai Tran is a genderqueer Vietnamese American writer based in New York. She was a winner of Epiphany Zine’s 2020 Breakout 8 Writers Prize and her work has appeared in Apogee, Vox, i-D, The Rumpus, and elsewhere. She currently serves as a nonfiction coordinator for MFA App Review and is a 2021 Poetry Coalition Fellow with Lambda Literary.

Mark Oshiro is the award-winning author of the young adult books Anger is a Gift and Each of Us a Desert, as well as their middle grade books The Insiders and You Only Live Once, David Bravo. They are also the co-author with Rick Riordan of the upcoming Percy Jackson spinoff novel centered on Nico di Angelo and Will Solace. When not writing, they are trying to pet every dog in the world.

Marianne Kirby writes about bodies both real and imagined. She authored Dust Bath Revival and its sequel Hogtown Market; she co-authored Lessons from the Fatosphere: Quit Dieting and Declare a Truce with Your Body. Her short fiction and nonfiction appear in numerous outlets. Find her online at www.mariannekirby.com or @TheRotund everywhere else.

Chencia C. Higgins is just a girl from Texas who has made it her mission to create stories in which sassy, southern Black women are loved out loud. In 2019 she won a Romance Slam Jam Emma award for her debut paranormal romance, Janine: His True Alpha. When she isn’t hunkered down in her writing cave, Chencia can be found with her nose in a book, saving recipes on Pinterest for things she’ll never make, and dreaming about traveling even further south for the winter.

Danny Lore is a queer Black writer and editor raised in Harlem and currently based in the Bronx. They’ve had their short fiction published by FIYAH, Podcastle, Fireside, Nightlight, EFNIKS.com and more. They’re also included in A PHOENIX FIRST MUST BURN (Viking Children’s, 2020) and Janelle Monae’s THE MEMORY LIBRARIAN (Harper Voyager, 2022). They’ve written the comics QUEEN OF BAD DREAMS (Vault, 2019), QUARTER KILLER (Comixology, 2020), and most recently LUNAR ROOM (Vault, 2021). Their next creator-owned project is the middle-grade graphic novel KICKS (Scholastic, 2024) to be illustrated by Seth S. Smith.

The ceremony will be preceded by an incredible slate of panels, readings, and interviews with our finalists. General admission is $52 USD and includes access to all programming, the ceremony, the virtual social space, and a virtual gift bag of digital goodies from our sponsors and community partners. Upgrade to the Lammys Box ticket* for $130 USD and receive a box of premium, tangible goodies in the mail, designed to help you celebrate Lammys night and take advantage of the inspiration you may experience after. All proceeds benefit Lambda Literary programs.

To purchase tickets, visit the event page on Airmeet.

Stay tuned for more updates and surprises as we count down to the 2022 Lammy Awards!