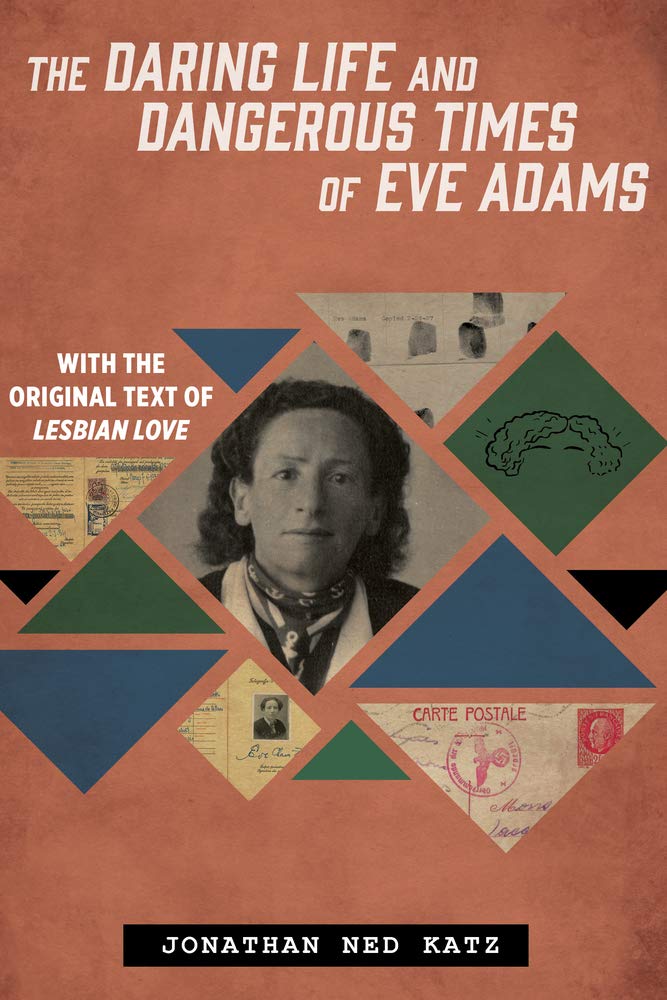 A Radical Lesbian: Review of The Daring Life And Dangerous Times of Eve Adams

A Radical Lesbian: Review of The Daring Life And Dangerous Times of Eve Adams

LGBTQ historian Jonathan Ned Katz has produced a study in detective work. The journey began on December 1, 2016, when Katz learned from the New York Times Book Review of a “Polish-Jewish immigrant” named Eve Adams accused of making “a homosexual advance” toward an undercover police officer.  The discovery that this woman had published a collection entitled Lesbian Love in 1925 surprised Katz, especially since he had spent the past forty-five years tracing the lives of formerly-invisible U.S. lesbians and gays. With this biography of Adams, Katz has attempted to redress the virtual erasure of his subject from the annals of LGBTQ scholarship.

Katz disrupts chronology by beginning his account with Adams’s 1926 deportation hearing, a result of collusion between a Greenwich Village resident, self-described “artist” Jay Fitzpatrick, and U.S. Immigration Service officials. Dubbed the “Ambassador of Greenwich Village” by a Village newspaper and presumably motivated by lesbophobia and possibly anti-semitism, Fitzpatrick had previously reported Adams to the New York City Police for “undesirable” behavior associated with her and the patrons of her tearoom at 129 MacDougal Street. When the NYPD opened a file but took no further action, Fitzpatrick went out of his way to share his false version of Adams’s activities, which now included implications of prostitution, with the U.S. Immigration Service. Despite her request, Adams was never given a chance to confront her accuser and several glaring contradictions in Fitzpatrick’s narrative were overlooked. Katz demonstrates that these injustices combined with others, such as inadequate legal representation, served to render Adams’s deportation a foregone conclusion.

Next, the historian steps back to 1912, the year of twenty-year-old Adams’s arrival in New York from Mlawa, Poland, then part of Russia.  Katz informs us that her first social contacts in New York included writers and organizers involved in the monthly anarchist journal Mother Earth including fellow-Jewish anarchist immigrants like famed free-love advocate Emma Goldman and her partner Alexander Berkman. Here the historian introduces a shaded overview of other events in the year 1912 including the lynchings of sixty-two African Americans, the sinking of the Titanic in which wealthy ticket holders were favored to survive over many third-class passengers, and the first meeting of the women-only Heterodoxy Club at Polly’s Restaurant on MacDougal Street in the Village. Katz’s employment of shading actual historical events to offer context serves the volume well as it details often-overlooked occurrences or points up the class, race and gender implications of well-known events.

Katz describes Adams’s itinerant life selling anarchist and other avant-garde publications around the U.S.  until she settled for a period in Chicago where she co-managed the Grey Cottage, billed as “Chicago’s Greenwich Village Tea Room.” The chapter describing the Chicago period performs several functions. It presents an early prototype of Adams’s Greenwich Village establishment “Eve and Ann’s,” introduces readers to Ruth Norlander, Adams’s one-time lover with whom she unsuccessfully strove to maintain a lifetime friendship, and underscores the contrast between working-class, anarchist openly-lesbian Adams and many of her more “discreet” middle-class contemporaries who were reluctant to speak openly of their same-sex intimacy.  In addition, the chapter provides a snapshot of the Poland from which Adams emigrated in 1912 as “seething politically and culturally”, distinct from what Katz perceives as the mainstream presentation of Russian-Jewish small-town life as conservative and traditional. That one short chapter serves so many purposes at once points to the distinctive features of Katz’s narrative as a whole. While this approach may seem digressive or unfocused to some, it also may delight readers by making unusual connections and furnishing often-overlooked details.

The historian next recounts the significant events following Adams’s return to New York City in 1923: her Declaration of Intention to become a citizen, the opening of Eve and Ann’s at 129 MacDougal, followed by a 1925 listing for “Eve’s Hangout” at the same address, the publication of her collection Lesbian Love  in 1925, followed by a raid in 1926  on the tea room and  Adams’s arrest on charges of “disorderly conduct” and publishing an “Indecent Book.” Clearly the malicious work of Jay Fitzpatrick was coming to fruition as Katz suggests the police deliberately set up a sting operation to entrap Adams using a policewoman as a decoy, and the unusual imposition of a year-long jail sentence to lay the foundation for the defendant’s future deportation. Adam’s defense against these charges is forceful and clear. She upholds the integrity of her book and, professing love for the U.S., explains that simple carelessness prevented her from pursuing her initial request for citizenship. (Katz acknowledges the possible disingenuousness of the last claim coming as it did from a professed anarchist.)  Still, the fact remains that Adams seriously underestimated the nefariousness of the U.S. surveillance state. It must be added that the full text of Lesbian Love complete with illustrations appears in an appendix to this book, so that readers can fully fathom the falsity of the indecency charge.

While Katz isn’t entirely successful in engaging readers as he guides them through the combination of legal documentation and media hearsay, the chapters about Adams’ life in exile are direct and focused. After a brief sojourn in Poland, Adams arrived in France and was making a living selling sexually explicit literature including the novels of her friend Henry Miller when the U.S. Stock Market crashed. The departure of many English-speaking expatriates curtailed her modest livelihood. And as the horrifying implications of the Nazi occupation of France began to overtake Adams and her companion, the probable Resistance operative Hella Olstein, it became  increasingly clear that a lack of financial resources closed off all avenues of escape. As the Nazi stranglehold tightened, Adams’s pleas for help from friends living in Europe became more and more desperate.

In the chapter entitled “War,” Katz expertly juxtaposes shaded historical events to chronicle the collapse of European democratic institutions with Adams’s frantic missives asking friends for money toward safe passage out of fascist occupied Nice. After all efforts fail, Katz draws on survivor accounts of the conditions of transport 63 that delivered Adams and her companion to Auschwitz-Birkenau in German-occupied Poland. He concludes this riveting, heartbreaking chapter with the stark report that at the end of the war six women survived transport 63 and that Eve Adams and her companion were not among them.

The historian’s analysis in the Epilogue fittingly begins, “It’s daunting to follow atrocity with words.” Yet this concluding chapter includes compelling autobiographical information that places Katz’s book in the context of his own life as a cisgender, Jewish scholar of LGBTQ history. His circumspect caveat at the outset of the study that “the surviving evidence about Eve Adams will, I suspect, always leave us wanting more” is mitigated by Katz’s moving conjuration in the closing paragraph of the book of an apparition of Adams shouting “Don’t mourn. Organize!” Readers will do well to take heed.