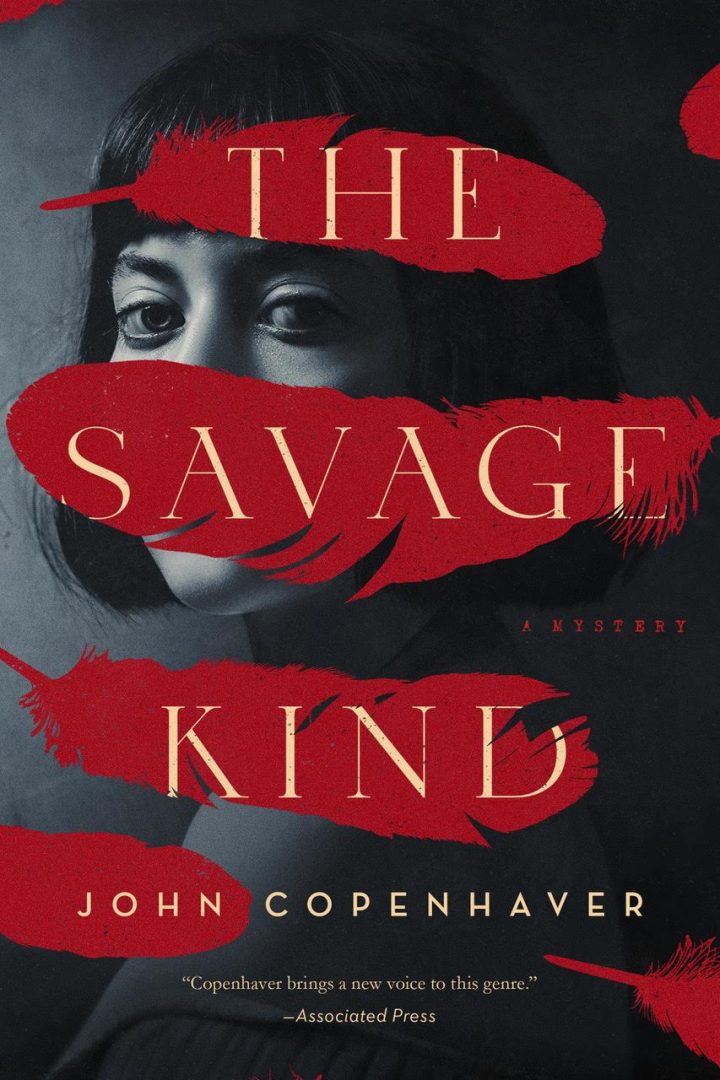 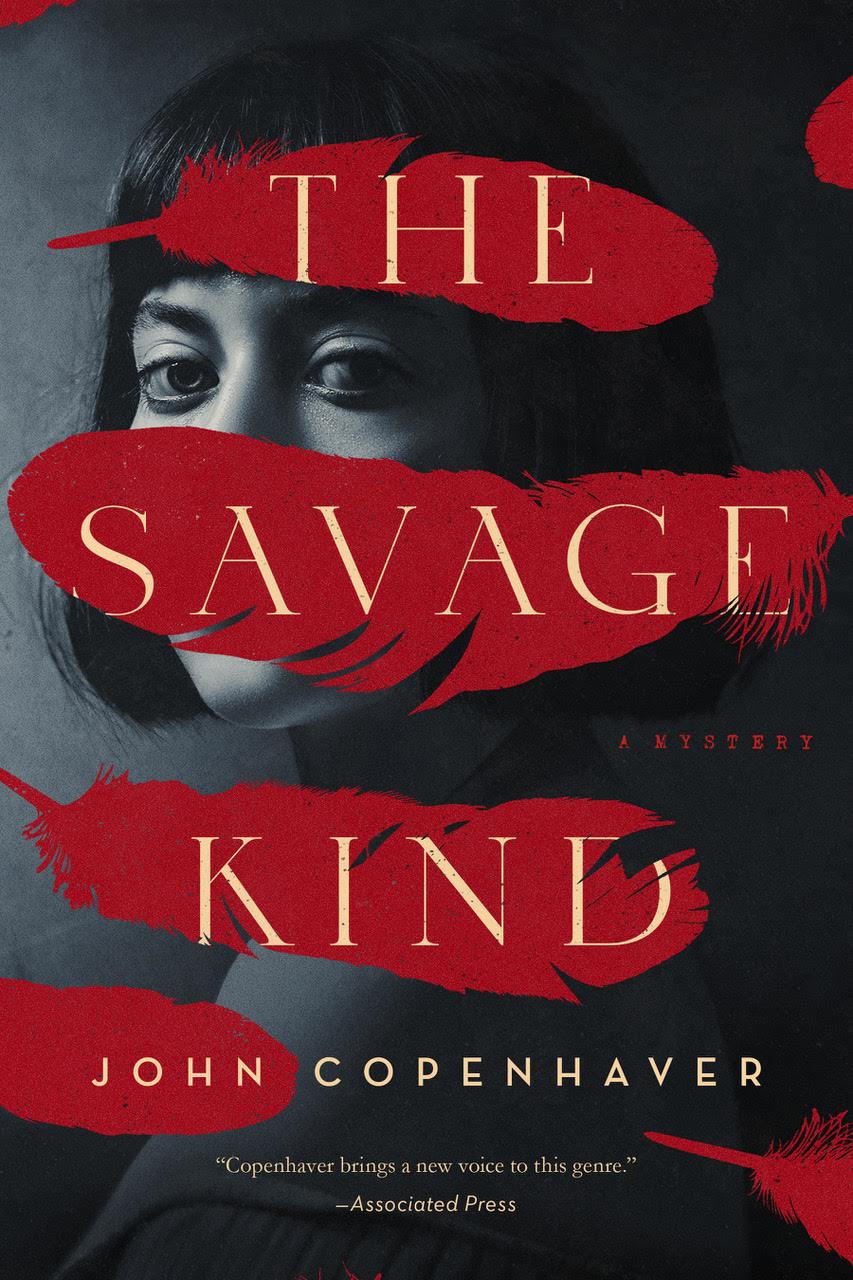 The following is an excerpt from John Copenhaver’s new novel, The Savage Kind, which was released on October 5th from Pegasus Crime.

Philippa Watson, a good-natured yet troubled seventeen-year-old, has just moved to Washington, D.C. She’s lonely until she meets Judy Peabody, a brilliant and tempestuous classmate. The girls become unlikely friends and fashion themselves as intellectuals, drawing the notice of Christine Martins, their dazzling English teacher, who enthralls them with her passion for literature and her love of noirish detective fiction.

When Philippa returns a novel Miss Martins has lent her, she interrupts a man grappling with her in the shadows. Frightened, Philippa flees, unsure who the man is or what she’s seen. Days later, her teacher returns to school altered: a dark shell of herself. On the heels of her teacher’s transformation, a classmate is found dead in the Anacostia River – murdered – the body stripped and defiled with a mysterious inscription.

As the girls follow the clues and wrestle with newfound feelings toward each other, they suspect that the killer is closer to their circle than they imagined – and that the greatest threat they face may not be lurking in the halls at school, or in the city streets, but creeping out from a secret murderous impulse of their own.

Today I met someone remarkable.

I was staring at my mountain of spaghetti at lunch when an elbow jabbed me. A gossipy girl—Betty, Barb, Bess? Something with a B—pointed across the cafeteria and whispered, “Judy Peabody, the one with the bangs. She drops bricks on cats. Kills them for fun.” This girl, Judy, held herself erect and gripped her tray like a battering ram. Her jet-black bob sliced across her forehead and fell in sharp angles over her high cheekbones. Over her long black sweater hung a double loop of faux pearls, like a flapper’s from an old silent movie. The other kids scattered as she strode to an empty table and sat. She arranged a napkin in her lap, pulled her sleeves back, and tucked her pearls into her sweater. Her every movement felt choreographed, and I wanted to know more: Who was she? And why the dated outfit? And what exactly did she do to cats?

Before she ate, she scanned the room. When she looked in our direction, most of my tablemates, the Metro Baptist Bible School contingent (commonly known as MBBS girls), burst into an explosion of gasps and side-jabs, as if spotted by a vicious predator in the wild. A few of the older, more skeptical girls huffed, rolled their eyes, and adjusted their Peter Pan collars.

During the first weeks of school, the MBBS girls threw their arms around me, all good cheer and high-toned cooing, but their embraces felt fake—or unsure, like they were pinching my flesh, seeing if I was one of them, the real thing, whatever that was. But I was testing them too, and they were failing. They gossiped and backstabbed and babbled endlessly about boys. None of them read books or even newspapers, just Seventeen, Ladies Home Journal, and of course, the Bible. Their minds were nets, only catching the fluttery and flimsy bits of life.

On the surface, Judy and I are totally different. I have big, messy strawberry blond hair that I trap in a ponytail. I dress in pastel sweater sets, bobby socks, and own pairs of saddle oxfords in various color combinations: black and cream, cream and taupe, taupe and chocolate. It’s all a disguise, of course. I want to blend in, a strategy I’ve learned from moving around as a Navy brat. The blue-haired crone who taught me history my sophomore year told my father that I was “such a sweet and accommodating young lady.” It’s true. I always check my first impulse and edit it out. Adults do it, so I do it, too. But it wears on you, the politeness, the pretending. There was nothing sweet and accommodating about Judy. Apparently, she kills cats. I loathe them too. They make my eyes water, and my arms and legs break out in hives. Their back-alley screeching slides under my skin. Of course, I’m not going to kill a cat, but from where I stand, it’s justifiable homicide or . . . felicide? Seriously, is it even possible to bomb a cat with a brick?

When Judy’s black eyes met mine, I smiled. In return, she scowled, and it stung. I bowed my head and began twisting my congealed spaghetti into a tight ball around my fork. For the rest of lunch, I slurped down my noodles, and as I took my last bite, a shadow passed over me. I looked up, and there she was. “Welcome to paradise,” floated from her lips, tinged with scorn. But the heat of her glare had been replaced with something else. Confusion? Curiosity? I wasn’t sure. Then suddenly, violently, she smiled. It was a cool, inscrutable smile, but all the same, it gave me a strange shock, like accidentally catching your reflection in a mirror. I felt seen by her—or was it that she’d seen some hidden part of me that the others hadn’t? It was horrifying and thrilling, and I was temporarily struck dumb. I wanted to say something like, “Nice to meet you,” or “The spaghetti is revolting, isn’t it?” but before I could, she was gone.

During afternoon classes, Judy’s dark eyes pooled around me and seeped into my pores. Her powdered face, her thin lips, her glossy hair, and her slender, craning neck seemed designed to display them, to announce them as her dominant feature. I couldn’t stop thinking about them. Staring at me, judging me, wondering about me. They pushed my attention far from trigonometric functions or the Battle of Waterloo. After school, I spotted her beelining up East Capitol Street. I wanted to introduce myself, but I wasn’t sure how to go about it, so I stalled out. For a few seconds, I watched her pass in and out of the shadows of overhanging trees. Then, gathering the nerve, I followed her.

“Um, hi,” I said, my books clutched to my chest, breathless. “I’m Philippa.” I offered her my hand as I walked beside her.

She glanced at it and quickened her pace.

“I know what you think, but I don’t like the MBBS crew,” I said, struggling to keep up. “They’re such namby-pambies.” I was trying too hard.

“Good for you,” she said, not even glancing at me, keeping her stride steady. “Why are you telling me?”

“So what.” She shrugged, eyes still aimed forward.

“You don’t care what they think.”

“Look,” she stopped and gazed right at me, her pupils black and unsettling, “you’ve been arm-in-arm with those preening bitches since you got here. I get it. You’re new, you’re lonely. It’s all just a little too pathetic for me.”

“Wait,” I called after her. “My father’s a Navy lawyer, and anyway, we were just transferred here, and I left all my friends in San Francisco, and my stepmother is driving me crazy. So yes, I’m a little pathetic right now.”

Did I say the right thing? It’d rolled out like an overturned basket of fruit. The glitter in her eyes told me that she approved of it—or maybe of my rawness, my honesty. I was feeling puny and desperate, and somehow, she seemed like the solution. Then her expression flickered—amused perhaps?—but she didn’t smile. On either side of the street, the brick row houses peered out over wrought-iron fences. Their mum-stuffed gardens stirred in a breeze, and their old, uneven windowpanes reflected patches of irritating bright white light. Aside from a few parked cars with their chrome grills flashing in the sun, East Capitol was oddly deserted for midafternoon.

We were the only people within blocks.

Judy began walking again, slowly. I kept pace beside her, but I didn’t say anything. I hoped she wouldn’t speed up again and dash off. One thing was true: her magnetism—if that’s the right word for it—was unmistakable. Aunt Sophie told me that some people have stronger auras than others, that if you have “the gift,” you can see another person’s aura. Judy’s aura must be blazingly intense, but I had no idea what color it was. Blue? Purple? Black?

East Capitol Street gave way to the wide, tree-lined expanse of Lincoln Park. Silhouetted by the yellows and oranges of the turning trees, the Emancipation Memorial loomed at the far end, depicting an imperious Lincoln waving his hand over a kneeling slave. Behind it, fifteen blocks away, the dome of the Capitol rose to the sky like a giant igloo. Judy nodded toward the memorial’s dark bronze figures: “Is he freeing him or making him beg for his freedom?”

I didn’t know how to respond, worried that I’d say the wrong thing and scare her off, so I squeaked out, “I don’t know.”

“No, you wouldn’t. Well, I would know. I understand what being shackled is all about.”

What a thing to say! I smiled, but she didn’t, her face as grim as a tragedian’s mask.

“I do,” she said with a kind of finality, as if she was stating a fact.