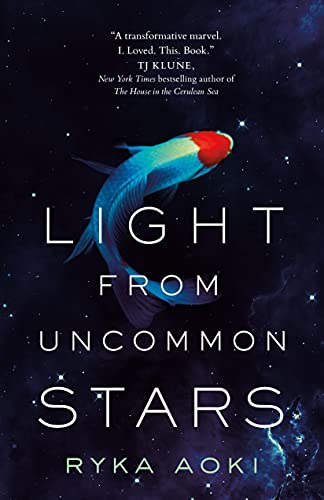 The following is an excerpt from Ryka Aoki’s novel, Light From Uncommon Stars, which was published on September 28th from Tor Books. A defiantly joyful adventure set in California’s San Gabriel Valley, Light From Uncommon Stars follows the story of three women: Shizuka Satomi, a musician decades-deep in a Faustian bargain; Katrina Nguyen, a runaway trans violinist; and Lan Tran, donut shop owner, mother, and starship captain. At the start of this section, Katrina has just fled yet another unsafe home, and found her way to Shizuka’s. It is the beginning of an apprenticeship, but also the start of what could become a beautiful found family worth crossing the universe for.

Katrina sat up. Quickly, she checked herself. No new scrapes or bruises. She was wearing a nightshirt, but it wasn’t ripped. She’d not been choked. In fact, her body seemed fine.

She panicked before she felt the case next to her. She opened it carefully. The strings were still loose. A peg was still missing; the bridge was still glued to the face. Her heart sank. That part had not been a dream.

Still, here she was, and her violin was with her. But where was here?

There was a knock on her bedroom door.

“Miss Katrina? I heard you stir. Are you awake?” said a proper, yet caring voice. Somehow, the voice made her feel safe.

She cracked the door open.

“Good morning. I am Astrid, Miss Satomi’s housekeeper. Did you sleep well?”

“Last night, you were exhausted, so we let you sleep. But you’ll feel better after you take a bath. Come?”

Katrina followed Astrid down the hall. Astrid handed her a towel and a washcloth.

“Miss Katrina, please use the shower first. Then soak in the bath; it’s already filled.”

“Leave the nightshirt here to be washed. Your clothes are almost dry. I’ll leave them on your bed.”

The bath was not the bathtub she had at home. It was rectangular, and came about waist high, and a gentle steam floated from the surface. A sturdy wooden step stool allowed her to ease herself inside. She closed her eyes, and stepped in.

Katrina quickly withdrew her foot, which was now was flushed and red.

Holy fuck, the bathtub from Hell! Seriously, who took a bath in water this hot? She added cold water until the temperature was bearable. Finally, she eased herself in.

Katrina couldn’t remember the last time she had taken a full bath. Katrina usually rushed her showers; being naked, even with herself, made her uncomfortable.

But here, submerged to her neck in the still-steaming water, Katrina felt almost weightless. When was the last time she felt that?

She thought she heard something in the hallway. She tried to get up, but slipped back. Immediately, she cringed, expecting something in her body to hurt.

But there was nothing. Nothing outside, and nothing within. No pain. Just calm. Quiet.

Katrina had thought she’d rush her bath, like she always did. But maybe she could stay in just a little while longer.

She didn’t know how long she had been in the bath, but eventually, the water cooled enough that she shivered. She stepped out of the tub, dried herself with a big fluffy towel, and looked for her . . .

Astrid said they would be on her bed.

Katrina hastily wrapped herself in her towel. Wait, she had woken in a nightshirt. That meant that last night either she or Shizuka must have undressed her. They must have seen . . . but Astrid had made no mention of this.

Katrina tried not to laugh at her own joke. But now she was naked. And, even if she covered her body, with wet hair and no makeup, there was nothing to keep her face from looking like a boy’s.

She had to be careful.

Katrina wrapped the towel around her and stepped outside quietly. Yet as the door closed behind her, she realized she had no idea of the way back to her room.

“Are you lost, Miss Katrina?” came a voice from behind her.

Crap! There was no way that Astrid could see her like this and not know. Katrina turned around slowly, then braced herself for the worst. Please don’t scream. Please don’t call the police.

“Oh! I should have brought you a robe. I’m so sorry,” Astrid said.

“Your room is the other way, at the end of the hall. Come down for breakfast in a half hour?”

“You have a big day today. Miss Satomi says she’s taking you to repair your violin.”

Half in a daze, Katrina walked into the bedroom. It smelled of old wood, incense, and camphor, like it had been still for a very long time.

Stillness was good. Stillness meant no sudden movements, no one rushing to kick in her door.

And there, on her bed, were her clothes. All of them. Not just the clothes she had been wearing, but the clothes in her bag. Everything had been washed and neatly folded.

She tried not to think about a stranger handling her work outfits and dirty underwear. Instead, she tried to focus on where she was. Beside the bed, there was a dresser, a closet, a vanity, a full-length mirror.

Quietly, she dried herself, then put on a newish pair of cotton pants and a top that reasonably matched. She retrieved her makeup and hairbrush from her bag, and sat at the vanity.

She looked into the mirror and touched her face. Her black eye was gone.

And wait—it wasn’t just warmth of the bath. Her rib was fine?

This seemed like a dream. But her forehead was still too heavy, her jaw still too wide. And she had the same ugly, oversized hands.

Well, whether she was dreaming or not, reality was reality.

Katrina smoothed moisturizer on her face, then found her razor. She pulled her skin taut, and shaved her facial hair as closely as she could.

Once her makeup was done, she checked herself one last time in the full-length mirror.

Then Katrina took a deep breath, opened the door, and walked downstairs.

The walls were covered in dark wood paneling, and the floor was carpeted in beige. The lamps were large ceramic decorative things that used incandescent bulbs. Everything was dusted, polished. But everything seemed to be sleeping. The drapes, the curtains, the furniture.

Katrina gripped her smartphone to remind herself what year this was.

“Miss Katrina, all clean are we?” said Astrid. “Wonderful. Please, sit. Would you like some tea? Earl Grey?”

“Miss Satomi will be down soon. I think you’ll enjoy this. It is a most wonderful Earl Grey.”

Katrina smiled. Or she hoped she smiled. Did she smile? Speaking to an older person, let alone an older person who was serving her, made Katrina uneasy, so she looked away and up at the wall.

Her eyes were drawn to a black-and-white photograph of a woman—no—a girl.

“The Paganini Competition,” Astrid’s said proudly. “Miss Satomi’s first major win. The picture next to it is from Warsaw—where she broke strings on two instruments and, finally, finished the concerto with a viola.”

Immediately she felt foolish at the sound of her voice. Who was she to speak of Paganini? Warsaw? She didn’t even know what a Paganini was. Instinctively, she looked toward the door.

“When you think of love, is it somewhere the colors are brighter and everything seems to glow?” Astrid said casually. “With no pain, like your heart is skipping and doing cartwheels?”

“Good. Because love is so much more complicated than that, isn’t it?

Katrina nodded. That much at least she knew.

“And so was the way Shizuka Satomi played. Now, sip your tea, dear, before it gets cold.”

And so did she.

As she sipped, Katrina looked at more pictures, and then records, news articles. Shizuka Satomi. She was more than a teacher. Far more.

“Miss Astrid, shouldn’t there be more about her online? At least a few recordings?”

Astrid tilted her head and gave an expression Katrina could not read. “I believe that she’ll explain it to you herself.”

“Yes. You might say that.” Astrid smiled as if Katrina had made a very clever joke. But before Katrina could respond, there came a voice from above:

“What is this about the music industry?”

The entire room seemed to stop and stand at attention.

“Ah. Well, we can talk about that later.”

“But, Miss Satomi, it just seems so unfair. What gives them the right—”

“No, don’t apologize. In fact . . . thank you,” Shizuka sat at the table, then looked at Katrina carefully.

“However, my music career is not the focus. What we must really concern ourselves with is yours.”

Jos Charles: Making a Space for Trans* Writers
'Transition: The Story of How I Became a Man' by Chaz Bono
'He Mele A Hilo: A Hilo Song' by Ryka Aoki