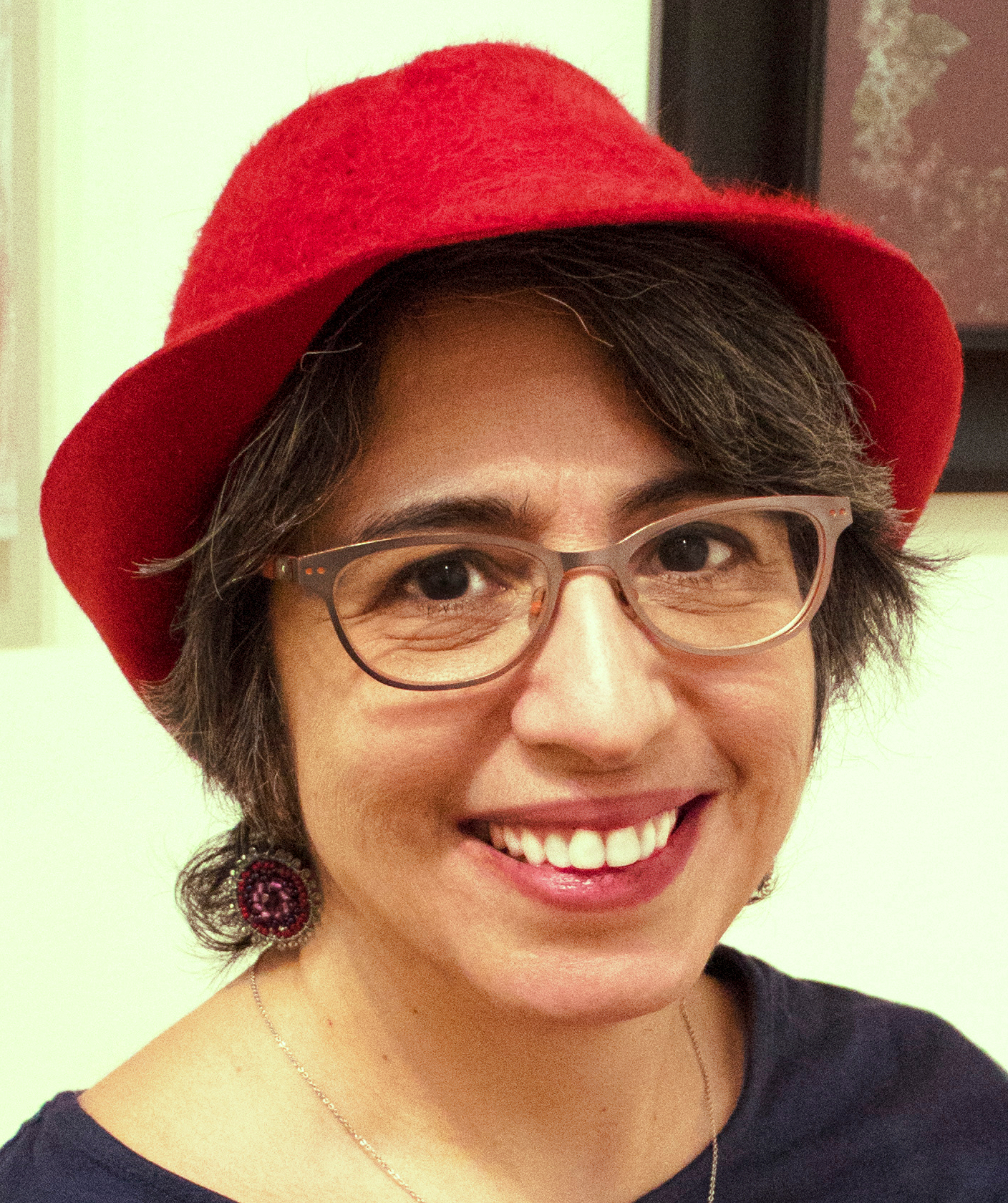 In memory of the beloved activist and author, Lambda Literary’s Jeanne Córdova Prize for Lesbian/Queer Nonfiction awards lesbian/queer-identified women and trans/gender non-conforming nonfiction authors who produce work that captures the depth and complexity of lesbian/queer life, culture, and/or history. The award was introduced in 2018 and includes a cash prize of $2,500.

Nancy Agabian is a writer, teacher, and literary organizer, working in the spaces between race, ethnicity, cultural identity, feminism, and queer identity. She is the author of Me as her again: True Stories of an Armenian Daughter (Aunt Lute Books, 2008), a memoir that was honored as a Lambda Literary Award finalist for LGBT Nonfiction and shortlisted for a William Saroyan International Writing Prize, and Princess Freak (Beyond Baroque Books, 2000), a collection of poetry, prose, and performance art texts. Both books deal with the intimacies of Armenian American identity via stories of coming-of-age and intergenerational trauma (resulting from the Armenian genocide of 1915), with a focus on gender and sexuality. Her recent novel, “The Fear of Large and Small Nations”, was a finalist for the PEN/Bellwether Prize for Socially-Engaged Fiction. She is currently working on a personal essay collection, In-Between Mouthfuls, that frames liminal spaces of identity within causes for social justice; select essays have appeared in The Margins, The Brooklyn Rail, Kweli Journal, Hyperallergic, and elsewhere. A longtime community-based writing workshop facilitator, she teaches creative writing at universities, art centers, and online, most recently at The Gallatin School of Individualized Study at NYU and The Leslie-Lohman Museum of Gay and Lesbian Art in NYC. As a literary organizer, she has coordinated Gartal, an Armenian literary reading series, and Queens Writers Resist with writers Meera Naira and Amy Paul. Nancy is a caregiver to her elderly parents in Massachusetts, where she lives.

I remember reading Audre Lorde’s Zami: A New Spelling of My Name and being blown away by it. I was 22, taking a “Lesbian and Gay Fiction” course at Wellesley College. (I didn’t know how fortunate I was. This was 1990, and my teacher was George Stambolian, one of the first scholars who identified queer literature as a genre. He passed away from complications of AIDS the following year, and has since become a queer Armenian legend.) I was newly out, and it hadn’t yet occurred to me that one could write from multiple identities, the way Lorde did as Black and lesbian and as the daughter of Caribbean immigrant parents. As I’ve re-visited the book over the years, I’ve admired the innovative ways she names and illuminates experiences as biomythography.

That summer I moved from Massachusetts, where I had grown up, to Los Angeles, and by the end of the year I found myself in a multicultural poetry workshop for women, led by Michelle T. Clinton at Beyond Baroque in Venice. Her poetry collection, Good Sense and the Faithless, broke the kinds of silences Lorde was addressing on racism, sexism, violence, trauma, and homophobia as a queer Black woman – with direct, searing language. Her powerful performances were stunning in their representation of radical, spiritual transformation. The generative space Michelle created with the diverse women of her workshop helped me to write about my queer coming of age – to write the stories I didn’t know I needed to tell in connection to my Armenian family’s history with genocide. Again, I was so fortunate to meet a brilliant teacher like Michelle at a crucial moment in my youth.

Later, as I shifted from poetry, to performance, to memoir, I was drawn to the humor of David Sedaris, especially Naked, his early “This American Life” stories about his Greek American family. Gloria Anzaldua’s Borderlands/ La Frontera: The New Mestiza has been the most influential to me lately in my attempts to represent queer Armenian experiences across borders and diaspora.

I care for my parents, who both have dementia, a few days a week. When I’m at their house, I put notes into my phone of experiences or ideas I want to explore in my writing. They are going through a lot of changes, and sometimes this brings delight for the new things they notice or express, and sometimes it brings grief. During the pandemic, caregiving has been a helpful lens through which to view the world and to cope.

When I return to my apartment, I usually spend one morning journaling about my time with my parents. On days I’m not teaching or trying to get my life in order, I try to spend one to three hours working on whatever deadline I have. I might be working on revisions of a novel, writing poems, or drafting long essays. Recently I’ve been working on a visual essay with my drawings in the form of an artist’s book.

As I work, I take breaks to walk, do the dishes, fix up my apartment, or crochet, to let my brain process some of what I’m writing. I live in a small town in Massachusetts now, just over the border from Rhode Island, so my walks take me past abandoned factories, triple-deckers, ornate Victorian homes, through the woods, and by farms both active and preserved. These physical, visual, and sometimes spiritual experiences give me insights into working with words.

I just finished Alexander Chee’s How to Write an Autobiographical Novel and found it a very hopeful love letter to queer writers. Randa Jarrar is another favorite; I loved A Map of Home, her short stories, and I’m excited to read her new memoir. I admire Zeyn Joukhadar’s work editing the queer and trans issue of Mizna and am eager to read his novels. Shushan Avagyan is a good friend and someone I’ve been honored to collaborate with over the years; she will publish an English translation (by Deanna Cachoian-Schanz) of her powerful, innovative Girk-Anvernagir (Book, Untitled).  Kamee Abrahamian has been doing amazing work as a queer Armenian caregiver, as an artist, scholar, organizer, and writer. I’ve been exploring a new generation of queer Armenian writers with The Queer Armenian Library (curated by J.P. Der Boghossian), and there are many folx I admire here, including poets Hrayr Khanjian and Armen Davoudian.

Early in the pandemic, I read Bettyville by George Hodgman, about his experiences moving back to Missouri to care for his elderly mother. I was already isolated as a caregiver before the pandemic struck. Eight months before quarantine, I had picked up and moved into my parents’ house, and my life had such limited parameters compared to my writer’s life in NYC. Hodgman’s witty descriptions as a caregiver in exile from New York resonated a lot with me, especially when the book unfolds to get to the heart of his pained relationship with his mother as a gay man.

Besides the pandemic, I also experienced the war in Armenia from afar in the fall of 2020. Azerbaijan, with Turkey’s backing, attacked Armenians living in their ancestral lands in Karabakh, a region that has long been contested since war first broke out in the early 90s. I think any story that explores vulnerability has been instructive because the pandemic made the most vulnerable even more so. Reading Stone Dreams by Akram Aylisli, an Azerbaijani writer, was good medicine; it’s a slim novel that takes place in the days before the outbreak of the first Karabakh War. It’s not a queer book, but it’s rare in describing the worst nationalistic tendencies towards violence alongside the best local and communal practices.

Akilah Oliver’s collection of poetry, the she said dialogues: flesh memory has just been reprinted, and it’s inspiring in its form and voice. (Akilah was teaching a performance art workshop alongside Michelle T. Clinton at Beyond Baroque, where I was influenced by her theory on flesh memory, on the ways the body stores memory and trauma.) In the past few months, there have been readings of the she said dialogues by Akilah’s many friends. The Zoom gatherings were celebrations of her work and also felt like memorials. Akilah passed away suddenly ten years ago, so to hear her poetry, read by people who love her, helped to heal from her loss. And coming together through her work felt healing of the injustices of racism, sexism, homophobia, and dehumanization we’ve been experiencing and witnessing through Trump’s violent attacks on BIPOC, immigrants, women, and queer people, especially during the pandemic.

I’m trying to publish The Fear of Large and Small Nations, a completed novel about an abusive queer relationship set between Armenia and its diaspora. And I continue to work on a personal essay collection, tentatively titled In-Between Mouthfuls, which defines liminal experiences of identity within causes for social justice. For example, I’ve written about Armenian racial identity on the margins of whiteness, and I’m working on a piece about my bisexuality as both privilege and disadvantage in this new age of awareness about gender and sexual fluidity. My essays on caregiving, the pandemic, and the war, also fit into this framework of connecting dots. In the spring I taught an online workshop series called “Connected Rooms,” to write on experiences of diaspora, homeland, war, trauma, gender, and sexuality, and I am eager to continue this work. I’m excited to serve as a mentor to an emerging writer for IALA, International Armenian Literary Alliance this summer. And I look forward to keep connecting with people across identities and causes as a writer, teacher, organizer, and editor. I am currently on the lookout for queer and/or BIPOC caregivers of elderly parents, so please send them my way.