“He fit perfectly on me, belly to belly”: Krys Malcolm Belc’s The Natural Mother of the Child

“He fit perfectly on me, belly to belly”: Krys Malcolm Belc’s The Natural Mother of the Child 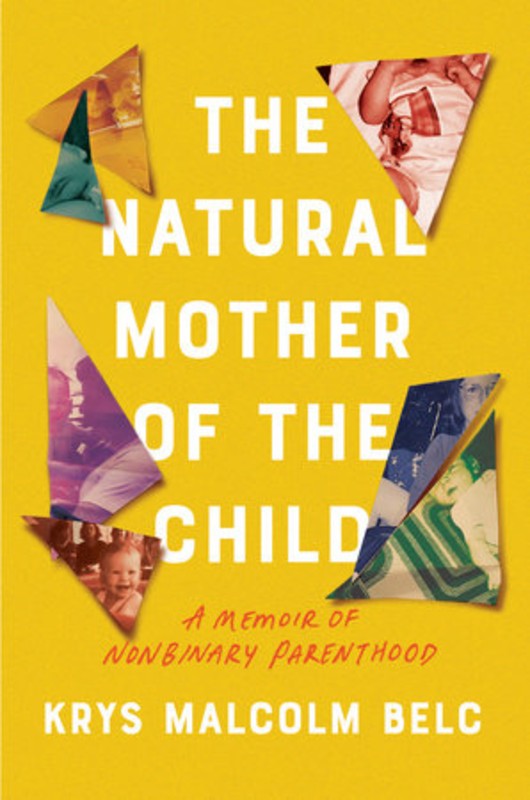 “Instead of mother, I say gestational parent, but the phrase often confuses people.”

Krys Malcolm Belc’s The Natural Mother of the Child: A Memoir of Nonbinary Parenthood (Counterpoint, June 2021) presents a collection of essays that investigates how personal growth journeys—such as pregnancy, excavating one’s gender identity, or conceiving a family—can often come in direct conflict with binary, gender-normative, heteronormative social constructs. Belc, who identifies as transmasculine but did not begin medically transitioning genders until after giving birth to his son, Samson, is also the oldest of six siblings, and spouse to Anna, the gestational parent of their other two children. Belc therefore has no shortage of stereotypically “gendered” life experience along his path as a nonbinary child, sibling, partner, and—central to the memoir—parent. In his investigation, Belc presents evidence beyond the written narrative: sonograms, marriage certificates, birth certificates, adoption paperwork, etc., highlighting the trove of information collected on the individual, sometimes even before birth.

Belc begins his memoir by interlacing the history of the ultrasound machine with his own encounters with the contraption, which he notes was originally developed from an “industrial flaw detector.” The machine is not just the device society has adopted as a primary tool for monitoring pregnancies (and for determining a child’s sex in utero), but also that which frequently reminds Belc of his own biology. As Belc writes,

“When I’d thought of my uterus, which was not often, I thought of a barren, wintry forest: untouched snow, thin, struggling trees. Harsh winds. The years in my teens and twenties, when I didn’t have a period were almost a point of pride, evidence that I wasn’t a woman after all.”

As we watch Belc’s child grow, his narrative concurrently describes a morphing sense of self: “The baby grew out, down. He started to eclipse me, and I wanted to get myself back.” Here, as he frequently does throughout the memoir, Belc pauses to reflect on his own journey into the world and its relation to the societal constructs he’s examining:

“My mother had a single ultrasound when pregnant with me, and she did not find out whether I was a boy or a girl. What difference would it have made if she did? The image would have been as wrong as the doctor who delivered me.”

Belc continues to challenge the language frequently forced upon him by the State, which communicates who organized society thinks he is supposed to be, rather than who he is. In addition, Belc breaks from conventional memoir formulas into non-linear narratives, plural and second-person addresses, and forms that resemble lists, as if to show that memoirs, like families, do not have to be structured a certain way just because the establishment deems it so. The second-person addresses are at times written to Belc’s partner Anna, at times to his gestational child Samson, and at times to his own mother. Sometimes, it seems Belc is writing to himself, contemplating, for example, his unwanted breasts, those same organs he uses to nourish Samson. Belc shows how his nonbinary identity in relation to his roles as a partner and parent often conflicts with external perceptions: “When I am no longer your girlfriend I don’t just become your boyfriend. I am in between and I intend to stay that way. I am a partner but come on, people just think that means lesbians, right?” Further contemplations, on his pregnancy: “Could a person like me, someone who was not a woman, perform the actions I’d seen Anna perform over the last year?”

Adding to the immersive reading experience contained within The Natural Mother of the Child, Belc dissects his experience via the boxes that appear on bureaucratic forms, showing readers pixelated enlargements of lines that many people fill in without second thought—first name, last name, sex, mother’s name, father’s name—and how the information entered into these boxes can impact families who may not align with the expected structures of the State. The memoir’s title comes from one of these forms. Belc writes,

“I had never embraced or used the term mother, but now having to see it on every form, phrased that way—the natural mother of the child—made me cringe. It made me rage. My relationship with Samson could be natural without my having to stand up in court and say I was a mother… He fit perfectly on me, belly to belly.”

At times, Belc’s braiding of research with personal narrative is reminiscent of Maggie Nelson’s The Argonauts, which Belc quotes: “How to explain that for some, or for some at some times, this irresolution is OK—desirable, even (e.g., “gender hackers”)—whereas for others, or for others at some times, it stays a source of conflict or grief.” Accordingly, Belc frequently honors other writers who have offered their own narratives on nonbinary parenthood and/or the queering of families. The importance of recognizing others’ narratives in this way cannot be understated: doing so builds a collective sense of agency, for both nonbinary parents and for the children themselves.

As a transfeminine person who is also navigating the impact of my gender identity on my roles as partner and parent in the eyes of society, for me, The Natural Mother’s inviting reading experience was largely rooted in feeling seen… I could not put the book down. At the same time, I find myself highly recommending the book to anyone whose identity has not been in dramatic conflict with organized society in the ways Belc’s has. Belc’s memoir places issues that are “out of sight, out of mind” for most front and center, providing a snapshot of where we are as a society, and just how far we still have to go to achieve greater inclusivity for all. For while the organized State might dictate how families are conceived in documents, paper forms—and the rigid language contained within—can never fully represent reality, can never dictate what is “natural.” As Belc notes towards the end of The Natural Mother, his child Samson “asks when we can meet other families like ours and I say, honestly, that I do not know.” In this way, Belc’s memoir is a courageous calling: here I am, here we are…you are not alone.

'At Home with Myself: Stories from the Hills of Turkey Hollow' by David Mixner
'Boy Erased' by Garrard Conley
'Shades of Love' by Dimitris Yeros

Jo is a writer and artist living in the San Francisco Bay Area. She is currently pursuing her MFA in creative writing at Saint Mary's College of California.