“I’ve already said too much”: Sylvia Byrne Pollack’s Risking It and the Power of Poetic Compression

“I’ve already said too much”: Sylvia Byrne Pollack’s Risking It and the Power of Poetic Compression 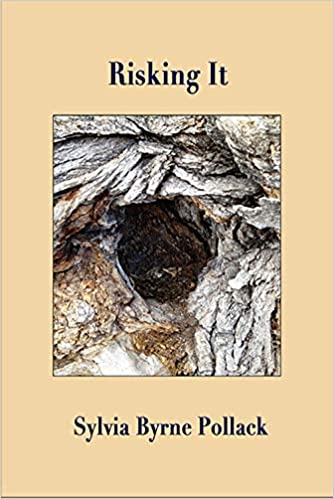 This strikes me as an excellent question, one that Sylvia Byrne Pollack’s debut collection, Risking It, can help me answer. It seems to me there’s an assumption that poetry can do a comparable amount of work—travel a comparable distance, plumb a comparable depth—in significantly less space than prose requires to do the same thing.

In other words, poetry fills us up faster and keeps us full longer. But how?

Risking It opens with Pollack’s title poem. It’s a sensory reverie from page one as we encounter “this large orange // mushroom glistening in rain / beside a Galiano Island trail.” The couplets here are both spare and succulent as the reader studies the mushroom, speculates about “this lush / fungus” before them. Then, volta—which always reminds me of voila, and for good reason:

In the last four lines of this first brief poem, our speaker pans out for perspective, to reveal the mushroom as more-than-mushroom—the mushroom as a repository for many meanings. The epiphany here also tunes the reader’s attention to meanings that grow (in that capacious, fungal way!) across all the poems that follow: “These are the questions/ faced every day: who to trust, // what to eat, how to prepare / for death.

The image and the afterimage

Images are poetic protein, the macronutrients that make any writing memorable. Poems seem to use more images per capita than much of the prose we read(most, not all). But an image isn’t just about a sensory experience. If the image is already familiar, then the impact won’t be as lasting, as substantial, as the kind that makes us see/hear/smell/taste/touch anew.  An image that makes an afterimage—one that lingers once direct exposure to the sensor has ended—is the rare gift of a well-made poem.

Here are some images that became afterimages for me in Pollack’s collection. I won’t soon forget those “trellised tomatoes” growing “so boisterously” after it rains that their “skins split like opened zippers.” Nor will I forget this intimate inspection of language: “how the words mossy limb feel in my mouth / dropped jaw of moss, then a slight smile as limb / lifts from my lips, mirroring Mona Lisa.” Nor this landscape imbued with a profound and unexpected interpretation: “twisted pines on the cliff / welcome housekeeper winds, tidying / these early hours into a new day.”

I tell my students “free verse is never free.” We either borrow the harness, or we leash the lines with our own invented restraints. A poem is made, and all made things require pattern, an attention to design. By analogy: If we don’t tie the shoes, we’ll trip on the laces.

Every one of Sylvia Byrne Pollack’s poems found in Risking It is impeccably made, but her inclusion of “Ghazal for Birdseed and Poetry” and the villanelle “Honeyed Days” shows a deep respect for poetic heritage, reaching for a seventh-century Arabic form and a seventeenth-century French form and folding these into a decidedly twenty-first century collection.

The ghazal, with its taut couplets and repeating end word, makes a sonic afterimage that lingers like the reverberation of a gong. In Pollack’s ghazal, that word is “future,” struck seven times. We can’t help looking to it, thinking of it—that future which includes death, inevitably, but also more than death.

The villanelle, with its repeating rhymed couplet split across stanzas like the two jump ropes in Double Dutch, likewise reverberates long after the poem concludes. In Pollack’s villanelle, these partner lines are “I used to believe old age was absurd. / How astounding I’m [writing/ humming/ thinking / singing] these words.” Her shifting verb choice compresses years of life into four linguistic pivots. In 19 lines, the reader travels a lifetime with this speaker, who sings at last of her own singing , the poet she always was but finally became.

Sylvia Byrne Pollack published Risking It at age 80, after a long, distinguished career as a research scientist and professor. The book contains fewer pages than the years of its author’s life—yet that life is inscribed here, fully, abundantly. It’s embodied in tender love poems to the speaker’s wife that reveal their long history together. It’s documented in lyric recursions of progressive hearing loss, which consider philosophically what listening truly means. It’s evoked in the scientific lexicon that shimmers in juxtaposition to domestic and artistic kinds of diction.

Yes, it’s remarkable and inspiring to publish a first collection of poems at Pollack’s age—a new passion, vocation, and skill cultivated in later life. Why not lead with this fact? you may wonder. Because the pithy epiphanies, resonant afterimages, and deft adoptions of traditional forms, purely on their own terms, make Risking It remarkable and inspiring. They are, like the words that populate these pages, enough.