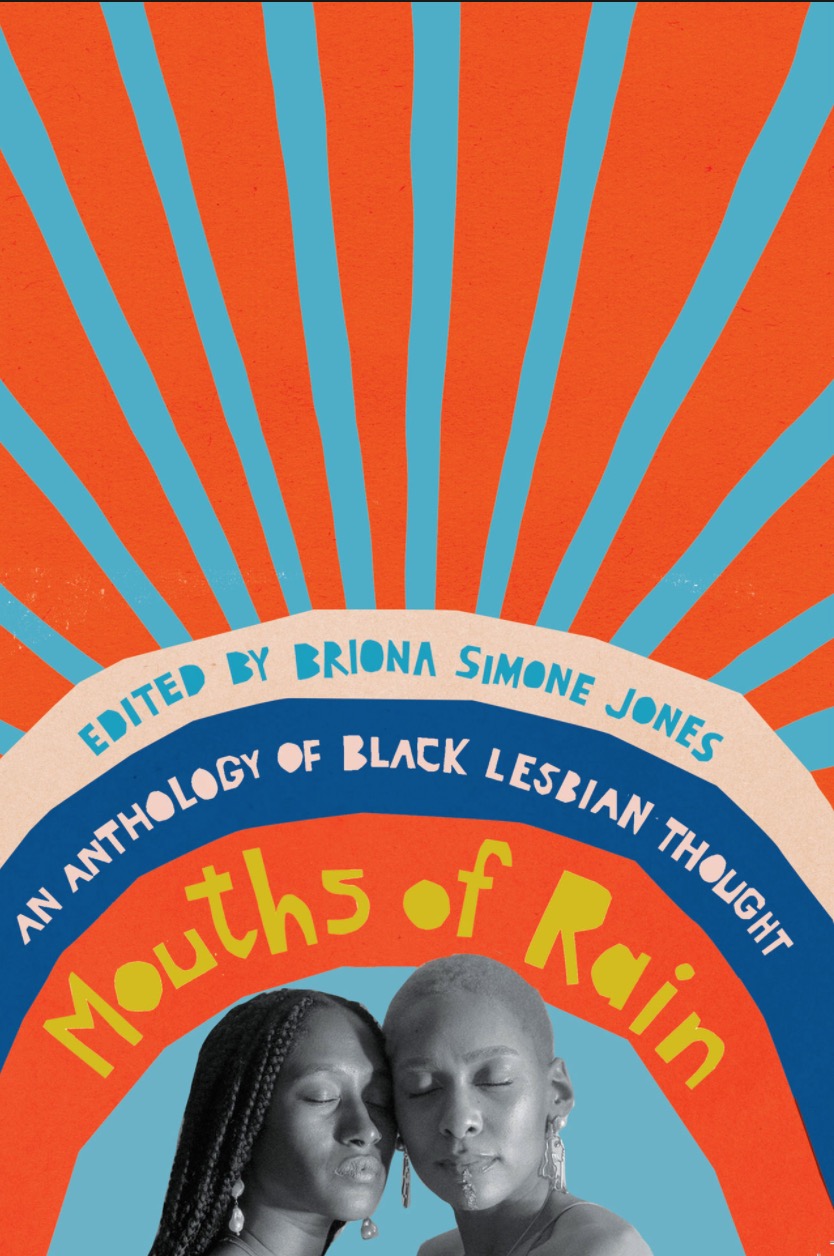 Mouths of Rain is a distinct anthology of writings from Black lesbian intellectuals, showcasing the creativity and depth of thought in the community over the last century. Edited by Briona Simone Jones, a doctoral candidate at Michigan State University’s English department, it features academic essays, personal recollections, short fiction, and poetry. The anthology boasts works from well-known figures such as Audre Lorde, Alice Walker, and Ma Rainey, as well less prominent but equally as insightful authors. The title of the anthology is inspired by Lorde’s “Love Poem,” with its line “carved out by the mouth of rain.” As Cheryl Clarke writes in her Foreword, “Lorde’s generation of Black lesbian writers showed us how to talk and write about sex.” Some works have been published before, while others, including an Alice Walker poem, appear for the first time.

Part II opens with Anita Cornwell’s essay “Three for the Price of One: Notes from a Gay, Black, Feminist” which relates the challenges she has faced in navigating her many identities. Growing up “Black, poor, and female in the Deep South,” she grappled with ”[the] battles, fears, phobias, and anxieties continually raging within.” Even her first female lover did little to help, for “if she knew other Gay womyn, she kept them rather well-hidden from me.” After several more lesbian relationships, she realized she was “irrevocably Gay” which drew her more into feminism, finding “straight men too sexist” and wondering why straight women “continued to let men use and abuse them.” Sadly, she found the feminist movement racist and unwelcoming, commenting that “fear of encountering racism seems to be one of the main reasons that so many Black womyn refuse to join the Womyn’s movement.” She also had to contend with “the extreme conservatism” within the Black community, so that even relationships with other Black lesbians became “such a harrowing experience.” However, even with all the prejudice she experienced, Cornwell writes that “I am sure glad I will never have to find out” what her life could have been had she not been lesbian.

Ann Allen Shockley’s “A Meeting of the Sapphic Daughters” tells, in fictional form, a similar tale to Cornwell’s essay. Lettie and Patrice are a Black, professional couple who attend an all-white lesbian group. The “bouncer” at the event stares at Patrice “long, hard, silent,” and the group’s president asks them if they “live around here,” which they take as a “subtle warning.” While confronting racism, they also question their own stances, asking themselves, “Have we come out to our colleagues, friends – students?” after lamenting their inability to find other lesbians of color. This story and others highlight the prejudices remaining within these different groups, and the work still needed to make them more welcoming places.

Part V, “Radical Futurities”, contains some of the more academic pieces, with essays such as Bettina Love’s “A Ratchet Lens: Black Queer Youth, Agency, Hip Hop, and the Black Ratchet Imagination,” which looks at how queer Black hip-hop artists use the concept of “ratchet” as a way of challenging the idea of respectability. Cathy Cohen’s “Deviance as Resistance: A New Research Agenda for the Study of Black Politics” suggests that those in the Black community who are “different” might have other ways of engaging in political struggle that are worthy of study. Lay readers might find these later essays, with their academic jargon and more removed tone, less approachable than the more personal works; still, they address important issues. Susana Morris’ “More than Human: Black Feminisms of the Future in Jewelle Gomez’s The Gilda Stories” is a compelling look at Gomez’s science fiction novel about a Black lesbian vampire whose ethics, Morris suggests, might present an alternative to humanity’s self-destructive impulses.

The selections are wide-ranging enough so that every reader can find something of interest, from scholars and students to those just casually exploring the subject. One minor drawback, though, is a lack of publication dates for the older, “vintage” pieces. While reading them usually makes the era apparent, providing dates at the start might give a more immediate sense of the historical development. Still, the diversity of pieces, from across time and labels, written by “dykes, queer women, butches, femmes, and lesbians,” as Cheryl Clarke writes in her foreword, impressively shows the richness of Black lesbian intellectual life. Mouths of Rain is a timely anthology of writings that will certainly spark conversations, connections, and ideas, both within the community and beyond.

Blacklight: Commentary on the Past, Present, and Future of LGBTQ Crime Fiction
'Safe Danger’ by Stephen Zerance
'Cockeyed' by Richard Stevenson

Charles Green is a writer and editor based in Annapolis, Maryland. His articles and reviews have appeared in many publications. Two of his magazine articles won Honorable Mention in the 78th annual Writers Digest Writing Competition.