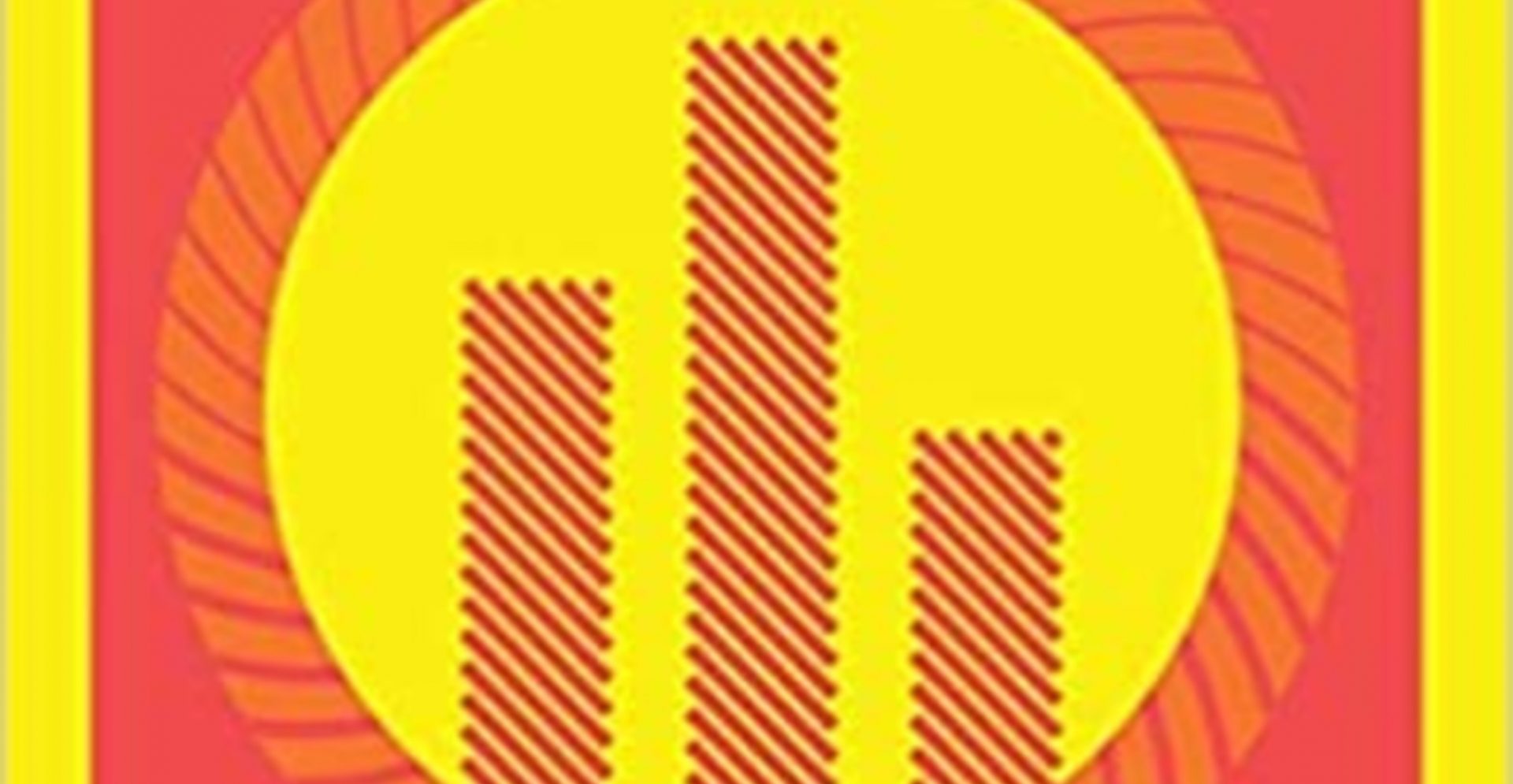 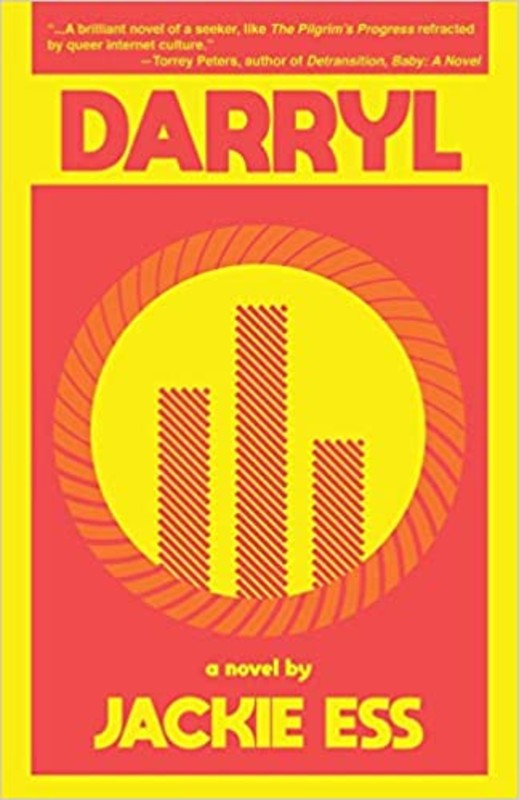 “Darryl” is minor Twitter sensation Jackie Ess’s debut novel. The bright yellow and red cover, tastefully psychedelic with a proud blurb by Torrey Peters, hints at the wild unpredictability of what’s to come. After reading the first chapter—the first sentences—“You live vicariously through celebrities, I live vicariously through the guys who fuck my wife. But sure, ok, I’m the weird one”—I had to stop, read it again, read it aloud to my roommate, and then take a deep breath and keep going.

I’ve been reviewing books professionally for years, but do not know how to write a review of “Darryl.” I attempted a straightforward interview with the author, but each question spurred its own separate and complex and rich vein of analysis, long enough for several pieces. So I’ve decided to resort to the journalistic standard I learned working on my high school’s newspaper, 5 Ws and an H, in hopes of even superficially capturing this book that’s unlike any other. Imagine if Chuck Palahniuk was a woman with a sense of humor about it, or if Chad Kultgen was less interested in heterosexuality. A novel in the tradition of disaffected white men who are weird about sex, skewered from the outside.

Darryl. White, in his 40s. He’s never worked and lives off a modest inheritance. He is a proud cuckold, or at least, as proud as he can be given that his whole thing is humiliation, and believes he has uncovered an eternal truth about hierarchies and gender through his fetish. He’s a father, but his son is already in college, and probably isn’t even his biologically. He’s married to Mindy, a woman who is unknown and unknowable to him. He may be having feelings for one of her regular bulls, Bill, but he doesn’t think he’s gay. He’s currently in therapy with Clive, a white-passing fascist of color who believes in MDMA therapy, among other unconventional psychological methods. He’s obsessed with Oothoon, a trans woman poet. He doesn’t believe he has the power to hurt anyone or to fuck up anyone’s life. He tries to do right by people. He is profoundly dangerous.

Darryl’s greatest joy is watching other men fuck his wife. He also enjoys basketball, GHB, and shaving off his body hair.

“When I wrote this thing,” Jackie told me, “I was living in Eugene. I had just gotten there, Trump had just been elected, and there was this uptick in local neo-Nazi activity. It was really scary. The corner bar would get tagged up with iron crosses and swastikas. I felt like I had a target on me; like, how many trans women of color are there in Eugene, Oregon? I don’t want to say that I was the only one, but it’s possible that I was the only one. I don’t really know. I was walking around thinking, ‘I’m surrounded by this stuff,’ and the word these people were floating on the street is that this is their dawn of power.”

White supremacy in the Pacific Northwest has a long legacy,” Jackie continued, “going right back to the beginning in places like Oregon and Seattle. The Northwest is a place where people are convinced of their own harmlessness, convinced of their own non-implication. They imagine racism as a southern thing, as a hick thing, everyone believes it’s somebody else doing it and yet somehow there are serious consequences.”

Ess’s debut novel comes out May 2021 through CLASH Books and is available for preorder.

“I started writing this at a time when I was burned out on the concept of trans literature. I had this sense that anything that I wrote was going to be read through my genitals or my color or my life history and I was like, I want to put down my past, and I want to write from the outside, and encounter this stuff in a fresh way that would be sometimes uncomprehending and sometimes hostile but most times just a bit clumsy.”

“Darryl does get people wrong, but…he’s mostly a guy trying to figure it out. I was interested in that perspective, and I felt like in some ways my own perspective had been limited by righteousness. This tendency to say, ‘Yeah I know it’s hard for you to adjust, but that’s not the real problem, the real problem is surviving this thing.’ And maybe I agree, it’s true that is a more important problem, but I wanted to meet that person and answer that person who’s looking into my life, or lives like mine, and meet them in some of their frustration with this…

I wanted to write somebody having that experience. I think that experience is really interesting. Not exclusively a portrait of people who are antagonistic, it’s a portrait of a lot of people who are trying to get it right but who are maybe not recognizing that their idea of ‘getting it right’ is a little bit poisonous. What they want is an Edenic situation where these challenges wouldn’t arise.”

“That was a lot of the fun for me, writing something that was totally outside the umbrella that couldn’t quite be queer. And I love this tone, the strident voice that emerged partly out of fandom cultures, partly out of people who wanted to talk about politics and queerness, et cetera, moving from Livejournal and Tumblr and is now everywhere. Now the mainstream culture is discovering all that stuff, which is generating new anxieties; which is kind of frightening, honestly.”

I don’t know how else to talk about this book. It’s written like a diary, Darryl spilling his guts out to you, but like any self-involved diarist, he is the most unreliable of narrators. It brushes up against Dennis Cooper’s “The Sluts,” one of the most daring unreliably narrated novels in recent history, making that world of hustlers and the men who review them on messageboards close enough to touch. This novel uses a deadpan, reasonable, low-key tone to explore utterly unhinged concepts, wholly deranged rationales, in a dizzying whirl of subcultures and ideals and catastrophic decisions and their consequences.

'Collaborators' by Deborah Wheeler
'Transition: The Story of How I Became a Man' by Chaz Bono
‘Camp Sites: Sex, Politics, and Academic Style in Postwar America’ by Michael Trask