A Pioneer Returns: Barbara Wilson’s Not the Real Jupiter

A Pioneer Returns: Barbara Wilson’s Not the Real Jupiter 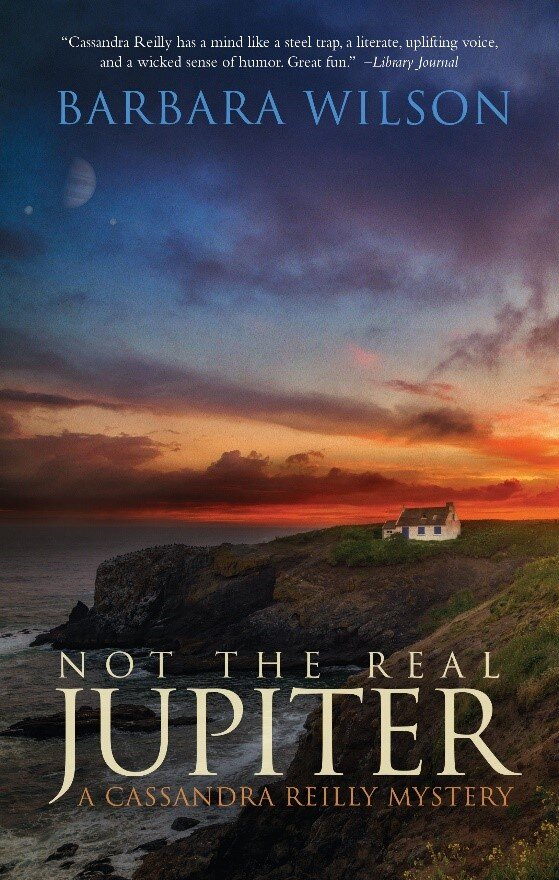 If Barbara Wilson were a major league baseball player, she would be hailed as that rarest of the rare, a five-tool superstar: power, speed, defense, hits for high average, great throwing arm. In our world of letters, she writes, edits, translates, teaches, publishes. Her books? She is a mystery writer, fiction writer, nonfiction writer, memoirist, biographer, instructor. If there were such a thing as a Women of Letters Hall of Fame in our literature, the range, substance, and lifetime achievements of Barbara Wilson would place her in the very top tier.

An early pioneer in lesbian literature, she introduced Pam Nilsen in the groundbreaking Murder in the Collective (1984), the first lesbian amateur detective in a mystery series to appear in American literature. Before that, she co-founded one of our original lesbian-feminist publishing houses, Seal Press, in 1976. Her decades-spanning body of work encompasses the two mystery novels that followed Murder in the Collective, then four books starring globe-trotting amateur sleuth Cassandra Reilly, who splashed down in spectacular fashion in another groundbreaking novel set amid the fabled architecture of Barcelona, Gaudi Afternoon. Winner of the 1990 Lambda Literary Award for best mystery, this gender blending caper went on to become a film starring Judy Davis and Marcia Gay Harden.

The Lambda Literary Awards, throughout their early years, formed a checkerboard of Barbara Wilson finalists in both the fiction and mystery categories. Only to have her emerge with another groundbreaker, Blue Windows, in yet another genre. Winner of the 1997 Lambda Literary Award for memoir, this remarkably even-handed work is a tour de force study of a belief system and its hold over reality (a theme with enhanced relevance today), a portrayal of Wilson’s Christian Science childhood in a turbulent household with a mother convinced that spirituality would heal her breast cancer.

As publisher, teacher and editor, Wilson’s achievements are no less remarkable.  As Barbara Sjoholm, her translations of Scandinavian literature are in print worldwide. She’s published a number of nonfiction titles of her own and worked with authors and editors on every facet of the craft. In more recent years her Cedar Street Editions has become a publishing venue for her work and a forum for freelance editors of fiction and creative nonfiction. A visit to the website, Author-Editor Clinic, reveals a glossary of topics incorporating most aspects of the publishing world, and is a gold mine for editors. Compared to the cornucopia of resource and advice books for writers, editors of those writers find themselves on a starvation diet of technical advice. A fulsome exception is Sjohlom’s An Editor’s Guide to Working with Authors. A blueprint for aspiring, fledgling, even established editors, it offers nuggets of wisdom and experience over the vast area of editorial concerns.

But to the book at hand. It’s been two decades since we’ve been treated to a mystery novel from this pioneer in lesbian literature, and it’s Cassandra Reilly who’s emerged for us in Not the Real Jupiter (arriving May 2021). The story takes us not to a far-flung setting like the three previous Cassandra books—Barcelona, Romania, Hawaii, England, Iceland, Venice—but it does open in Montevideo, and we’re soon in Portland, Oregon, hardly a prosaic location in Wilson’s hands.

Like her creator, Cassandra is a translator, in her case of Spanish literature. She is working with a temperamental Uruguayan writer on a story collection with a title taken from Alice Munro, The Moons of Jupiter. (A title that becomes ever more metaphoric as the novel progresses.) Author Luisa Monteflores is in a meteoric tizzy over the cover art and promotional plans of her American publisher. Cassandra flies into Portland on a mission of mediation, only to find herself embroiled in the murder of the publisher, who has been found at the bottom of the cliff beside her cottage on the Oregon coast.

A person of interest herself, under orders to remain in America by an admirably efficient police detective, severely pressured by her other professional commitments, Cassandra undertakes her own investigation to try to speed things along. Which brings her into contact with the publisher’s lesbian business partners and their romantic entanglements, the publisher’s unstable sister, and a world famous woman writer with her own enigmatic agenda.

Cassandra Reilly is a distinct rarity in our lesbian fiction: an unattached vagabond. Her primary love affair is with the world of the mind, and with traveling and experiencing the beauty and wonders of the world. She’s had romantic liaisons, but in these later years in life, she’s attached to a network of lifelong friendships and lesbian sisterhood, on full display in the Portland community.

The pleasures of a Barbara Wilson novel are only partly story. Like a Jane Rule novel—any Jane Rule novel or story or article—the primary reward is luxuriating in the company of an erudite and observant intelligence. We’re taken inside the arcane world of literary translation and shown that it is an art form all its own. We perceive the intricacies of independent publishing houses—which exist in a universe light-years apart from our Simon & Schusters—with an inside view from someone who has been there for decades. We’re treated to a strong sense of place with a setting on the atmospheric Oregon coast, the topography of the city of Portland, and we’re even taken on a visit to, indisputably, America’s greatest bookstore, Powell’s Books. Above all, as Cassandra states, we’re absorbed into a world of “Women whose lives are shaped by imagination.”

Our thanks are due for this return visit from Barbara Wilson, and for a reminder of the history she has helped to create.