A Window Into Joy: Jennifer Finney Boylan’s She’s Not There

A Window Into Joy: Jennifer Finney Boylan’s She’s Not There 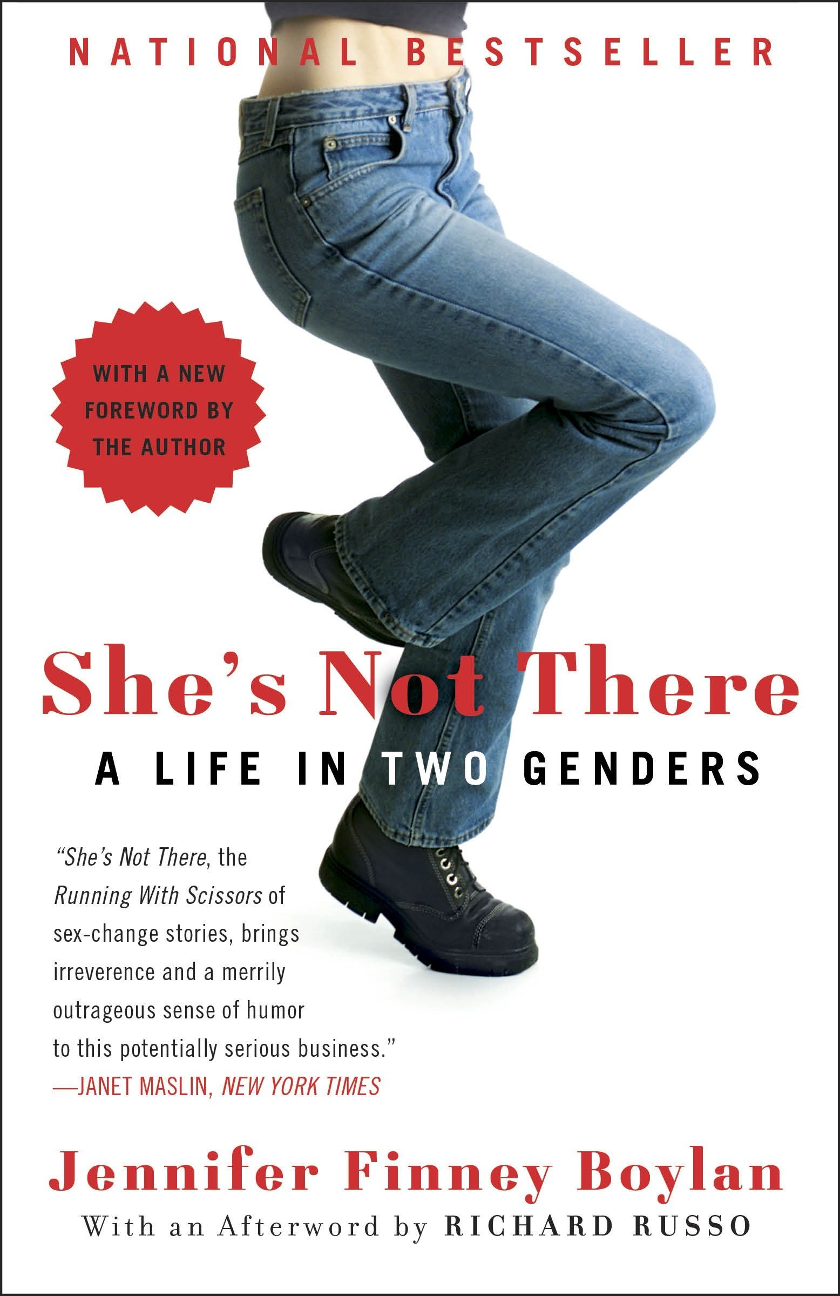 Spring is here. An end to the pandemic draws nearer. We just celebrated Transgender Day of Visibility. In my personal life, I am on the eve of a major milestone in my own transition journey (gender confirmation surgery). All while having the good fortune of being a Lambda Literary intern. With so much to be thankful for, I want to share my gratitude for Jennifer Finney Boylan and her book, She’s Not There: A Life in Two Genders, a book that helped make joy in my life possible.

In one of the coming out letters Jenny shares in her book, she writes, “…we all have dragons to slay in life. This one is mine. I hope that doing so will provide a model to others on how to find the bravery to be true to oneself, even if it means doing something that seems impossible.”

You did far more than provide a model, Jenny…

In 2005, at age 17, after years of putting on my sister’s makeup and going to bed fantasizing that I would wake up as a girl, I left home for the United States Naval Academy in Annapolis, with the erroneous belief that becoming a “man” and “going to war” were the only avenues to being seen by the people who ostensibly mattered most in my life.  Authority figures, with firmly rooted devotions to the cisheteropatriarchy. At Annapolis, my reverence for authority expanded, to include astute military officers, who carried themselves with a self-assuredness I at once envied and despised. For many years, seeking to be comfortable in my assigned-male-at-birth body, I foolishly obeyed, reluctantly buying into the binary, deeply burying my identity.

“The silence that trans people cloak themselves with,” Jenny writes.

I did not just employ silence to keep my secret, though. I employed the military might of the U.S. Armed Forces. It would take years to unbury myself. If only, at 17, I had read the following lines:

But it would be ten years until I read She’s Not There.

2015. Weeks after coming out to my wife, an alcohol-induced event that took far more courage from my repressed-self than jumping out of helicopters or diving beneath warships (regular parts of my job at the time, as a Navy Explosive Ordnance Disposal officer), I traveled to Guam to fill a staff-officer position for the summer. I left my wife at home in California with questions looming in both our minds: what did my overwhelming sentiment that my exterior did not match my interior–the repressed feelings now surfacing, causing physical and emotional turmoil–mean? For me, for her, for us? What could I do, so deeply entrenched in the “masculine,” military life I was living, one that even “banned” my true self? (the transgender military ban was still being enforced at this time).

With encouragement from an off-the-record therapist who recommended She’s Not There as an introduction to my own apparent transsexuality, I brought the book with me to the island.

Soon after arriving, the government ordered a 72-hour shutdown due to a tsunami warning. Blaring loudspeakers announced imminent power shutoffs, and warned residents to brace for impact, to stay inside, and wait for the “all-clear.” In preparation, I scoured the Navy Exchange for food I could consume at the “Bachelor Officer Quarters,” an old office-building-turned-barracks, with cinderblock walls painted with goopy white paint, and tired, government procured furniture.  Besides jars of Skippy, I settled on a cartful of $2.95 six-packs of clearance-rack Budweiser… a good deal for someone trying to ease the pain of living a lie.

One night into lockdown, my meal planning failed faster than the triple-digit winds ripping through Guam. Tormented by my own thoughts, I gave up on food, and consumed only beer. Until, as if by fate, as I laid amidst strewn about bottles, instead of reaching for another Bud, I cracked open She’s Not There.

It was like unlocking a window through which I could see my own path to happiness. Over the next two days, in the gray-green light of the storms crashing down outside, I read She’s Not There over and over. Despite the seclusion of my barracks room–with no outside communication, no superior officers dictating my every move–for the first time in my life, I no longer felt isolated in my identity. Jenny’s story described my position:

When I was a teenager I searched the library in vain for the story of a person I might resemble…. Without much in the way of dependable narrative or contemporary myth, there were ways in which I felt, back then, as if I did not exist…. Surely, if there were no books about lives like my own, I was fated to live a life in which I could only be invisible.

As the tsunami passed Guam and clouds gave way to sunlight, I emerged on a new journey, my journey, no longer feeling destined to be invisible. I did not have to live a lie to be seen. With courage, I could salvage happiness from a life that had been sinking toward rock bottom.

It would be years–more deployments, more transgender military service policy changes, and shedding of false identities–until I started medically transitioning. But even still, during this period of “stuckness” in my physical transition, I leaned on She’s Not There. Jenny’s story gave me the words I needed to articulate my feelings, and the narrative to help me visualize my own transition. I finally understood that, contrary to what society had me believing, I did not have to strive for some stereotypical image of “femininity” in order to be a “woman”:

For many people, transgender or not, womanhood is thought, wrongly, to be synonymous with femininity—with makeup and stretchy T-shirts and an obsession with Brad Pitt. None of this has a damn thing to do with it, of course, and in the long run, a transsexual who hopes to build a life around high heels and sponge cake is in for something of a disappointment.

(To be clear, I have nothing against high heels, or sponge cake…you do you!)

Though I still could not come out in the Navy without negative repercussions (the Twitterer-in-Chief had started calling trans people a “burden” to the military), I began confidently identifying to myself as trans. There was also bittersweet comfort in knowing that although my gender expression did not match my identity (even though I so desperately wanted it to), this did not fundamentally change the transwoman I was/ am/ forever will be. I clung onto Jenny’s words: “Being trans is about identity….What it’s emphatically not is a “lifestyle,” any more than being male or female is a lifestyle…. Gender is many things, but one thing it is surely not is a hobby…. In the end, what it is, more than anything else, is a fact.”

With foundational help from She’s Not There, encouragement from an extraordinary gender specialist, and expanded bravery built largely by reading LGBTQ books, I eventually understood that openly living my truth was more important than anything–than any policies, sense of duty, or others’ expectations. I would never be able to love others if I remained incapable of loving myself. It was time to slay the dragon that was the military’s influence over my life. In 2019, I turned in my resignation papers, and, in the same month, started hormone replacement therapy. I was elated and nervous, but Jenny showed me what was to come: “Within a few days I began to feel a strange buzz. My skin was sensitive. I imagined that I could feel the ridges on my fingertips. A sense of warmth pulsed inside me.”

The warm pulse under my uniform-free skin felt like me, coming alive.

The first loved one I came out to, besides my wife, was my best friend, a strapping, 6’4”, 250 lb. Navy SEAL who I’ve known since Induction Day at Annapolis. My own Richard Russo, in a sense, Jenny’s lifelong friend, who wrote the afterword for She’s Not There. Before I came out to him, we sat on my couch watching Game of Thrones. It was the “Battle of Winterfell” episode. As the bloody battle ensued, I instead thought of Jenny’s coming out to Richard:

‘But the thing that you don’t know about me is that I’m transgender. I’m a transsexual. I’ve identified as female since I was a child. My sense of having a woman’s spirit has almost never left me. The only time it ever vanished was when I fell in love with Grace, and when that happened I felt that what I had always hoped for was true, that I’d at last been cured by love.’ I paused to catch my breath. Rick was absolutely motionless. ‘Except that I haven’t been cured…‘

I hardly remember exactly what I said that night, but it was similar, so closely did my experience match Jenny’s, right down to the false sense that falling in love with my wife might have “cured” me. My SEAL friend, though shocked, embraced me in his colossal arms, and told me he loved me, no matter what. Today, our relationship is more meaningful than ever; the boundless gifts of living one’s truth. A truth I could not have envisioned without Jenny’s help.

Countless other accounts in She’s Not There continue to provide me courage in transition, ranging from the more practical (e.g. descriptions of electrolysis) to the deeply personal (e.g. transitioning as a parent and a spouse). Facets of my own journey that closely mirror Jenny’s, and others that do so only in name, because we are all, of course, unique. Nonetheless, I would not be where I am today without She’s Not There, and the world Jenny introduced to me: my truth, my community, my attainment of happiness.

In describing the “journey ﻿of the classic heroine,” Jenny says that:

The climax of these stories usually represents a kind of ‘moment of truth’ for the heroine, when she must slay the dragon, conquer fear, and attain illumination. To my students I have always noted that the journey of the mythic hero appeals to us because this paradigm tells our own stories as well. In the story of the mythic hero, we see the story of ourselves.

With one week until another major milestone in my transition journey, another fear conquered, another dragon slain, I am so grateful for my own mythic heroine, in whom I saw the story of myself. Only she’s not mythic at all, she’s real, and she’s Jennifer Finney Boylan. Thank you, Jenny.

Jo is a writer and artist living in the San Francisco Bay Area. She is currently pursuing her MFA in creative writing at Saint Mary's College of California.