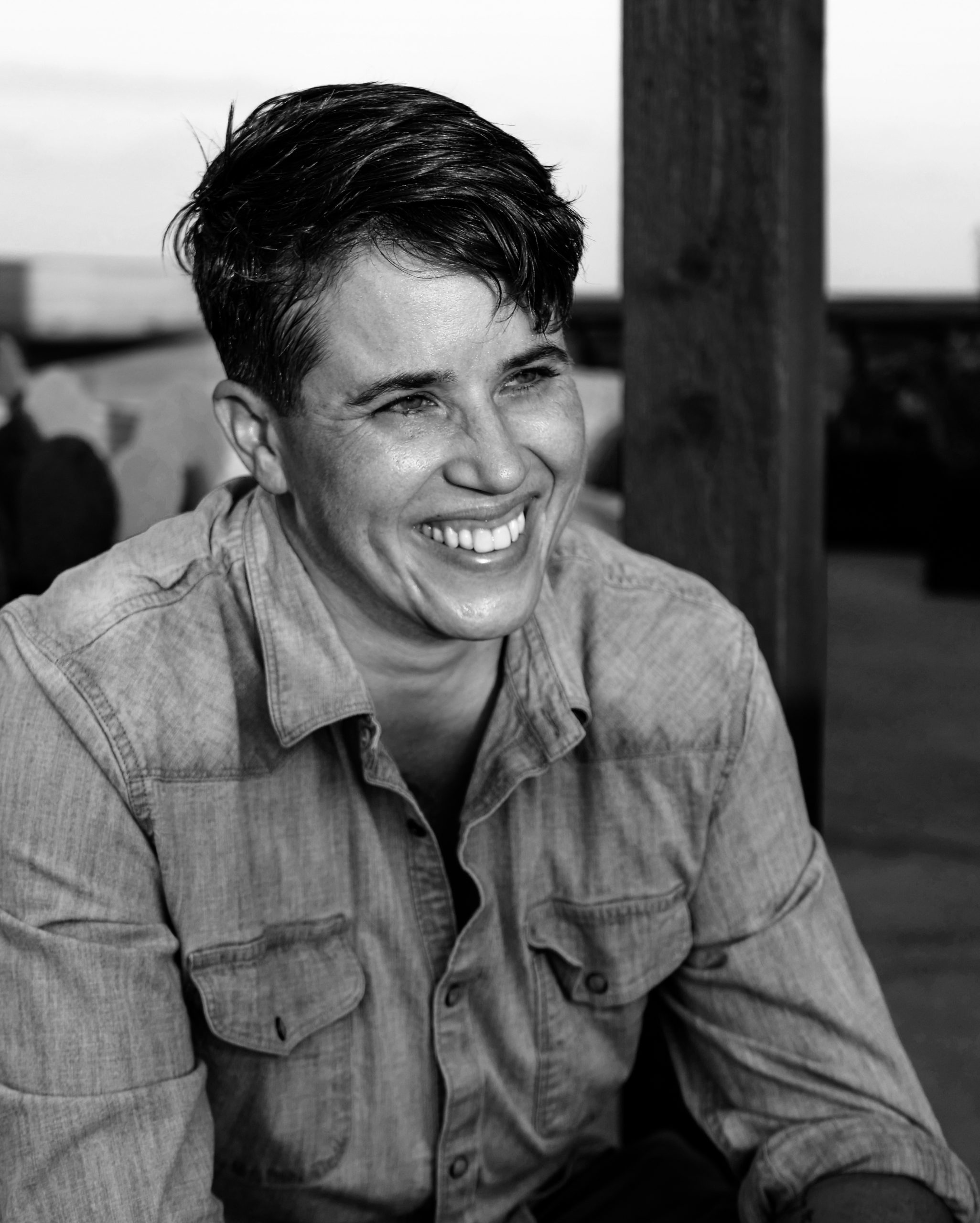 Welcome to May We Present…, a column from Lambda Literary that highlights authors with recent or forthcoming publications. This month, we’re featuring Lauren Hough and her new personal essay collection, Leaving Isn’t the Hardest Thing, released on April 13th from Vintage. Forgoing the traditional chronological memoir, Leaving Isn’t the Hardest Thing tells of Hough’s life (as a lesbian, a cable guy, an airman in the Air Force, a bouncer at a gay club, and a child member of a cult) through essays.

In frank and clever prose, Hough lays her experiences bare. Leaving Isn’t the Hardest Thing‘s unflinching honesty about the realities and inhumanity of life is exquisitely balanced by Hough’s humor and unpretentious profundity. This book will tear you apart and necessitate that you reconstruct yourself differently than before.

Below, Lauren Hough discusses the significance of travel, her journey from country music to the essay form, and finding a typo in her own book.

When did you realize you had to write Leaving Isn’t the Hardest Thing?

Hard to say. I spent more time avoiding writing it than I did writing it. By which I mean, I spent years trying to write anything else. I wanted to write country songs—maybe be the lesbian Townes Van Zandt. But we already have Mary Gauthier. And I can barely play guitar. And I’m shit at songwriting. Maybe, like anything else, I started writing it when I was ready. I was dead set on writing fiction but everything I wrote sounded like the last person I read. I started writing me and found my voice. Like anything that takes you forty years to find, it seemed inevitable.

In your acknowledgments, you recall having to be convinced to write in essays. How else might this book have taken shape? What did essays offer you that other forms of writing would not have?

Well, first of all, acknowledgments should be off-limits to interviews. I don’t even remember writing them. No one mentions acknowledgments until they’re due in 48 hours and suddenly you have to remember everyone’s name. And at that point, you’ve just finished writing a fucking book, and driven halfway across the country, shitting in Confederate graveyards to avoid catching a plague. My brain was soup. It’s nerve-wracking. Maybe this is a good example of what essays offered—our memories and thoughts aren’t linear. They’re attached to music and smells and, often, nothing at all. So to build a chronological memoir seemed false. Where would I begin or end it? And where would I fit all my tangents and my feelings about Dolly Parton? But the conventional wisdom among struggling writers is—essay collections don’t sell. This is gospel. It’s bullshit, but that’s never stopped anyone from spreading gospel. I don’t know that I had to be convinced so much as I needed an editor to give me permission. Tim O’Connell, my editor, made it sound fun. I could write what I wanted, leave out what I wanted. Instead of listing things that happened, I could tell a story and tell what it meant.

The last essay of the collection, “Everything That’s Beautiful Breaks My Heart,” points to a distinction between positive thinking and hope. Who is this piece written for and what do you want them to take away from it?

I don’t really think of anyone reading when I write. I can’t. I’d never write anything at all. That might be why I’m having such a hard time writing now­­—I’m starting to realize people read this thing. I just sat down and wrote what came, what I wish someone had told me all those years ago. The positive thinking believers are pretty damn loud. I’ll never drown them out. But maybe someone out there will relate. Why does anyone write if not for that hope?

Having written an essay collection so deeply rooted in your past, what did you discover about reflection and its relationship to moving forward?

I don’t know anyone who doesn’t lie awake at night thinking about the past and what they might’ve changed. I think it’s part of the human condition. I used to lie awake thinking my future wouldn’t be much fucking fun. So I wrote a book to try to change that. I didn’t really think and still don’t think in those terms. It’s not much fun.

Throughout Leaving Isn’t the Hardest Thing, you name numerous books that impacted you profoundly. What is the book you are currently most looking forward to reading?

Elon Green hit my DMs to ask if I wanted to swap books. Really one of the best parts of this job I scammed my way into—people send me free books. But goddamn. It’s called Last Call, about these forgotten serial murders in New York in the early 90s. It’s part queer history of New York, part true crime. I’ve been up way too late every night reading it. The way he honors the victims and doesn’t fall into any “perfect victim” trope, it’s a perfect book. Plus there are maps. I fuckin love a book with maps.

How would you spend your ideal day off?

This is the sort of question where the answer’s changed four times since I started typing this sentence. Maybe this is what the pandemic has done. I don’t know what my answer would’ve been pre-pandemic. Right now all I want to do is sit on a patio of a coffee shop in Austin with a book. Maybe pet a couple of dogs. Eat a taco. And complain about the heat. Or maybe I’d rather not have a day off at all. Sitting in my living room staring at walls and screens isn’t exactly what I pictured when I imagined a book tour. But here we are.

You’ve lived all over the world. From your experience, in what ways can locations and settings sensorially shape an individual?

How much space have you got? I think maybe seeing other places, other lives might make us more empathetic. Anytime I hear someone talk about how America’s a great country, I know they haven’t left. Made it hard for me to even be a Christian. How can anyone possibly believe in a god who’ll punish the other two-thirds of the world who’ve never even heard of him. Sort of backfired on the cult I was raised in. You want to raise good cult members, for god’s sake don’t let them travel and meet people with other religions who are just trying to live their damn lives and not be pestered by some white kid asking for change.

What are some essays by LGBTQ+ writers that have influenced you and your own writing?

I go back to Roxane Gay’s essay, “Not Here to Make Friends,” a lot. She talks about finding her own voice, the difference between kind and nice.

Lastly, what’s the one line from Leaving Isn’t the Hardest Thing that you just can’t get out of your head?

Well, I just read the audiobook, which is a bizarre experience. But it turns out it was a great way to find that typo. So I’m pretty stuck on that damn sentence. I won’t tell you where it is. But mostly I wrote about wanting to be a writer, wanting to live. This isn’t living. I need everyone to get their shit together.