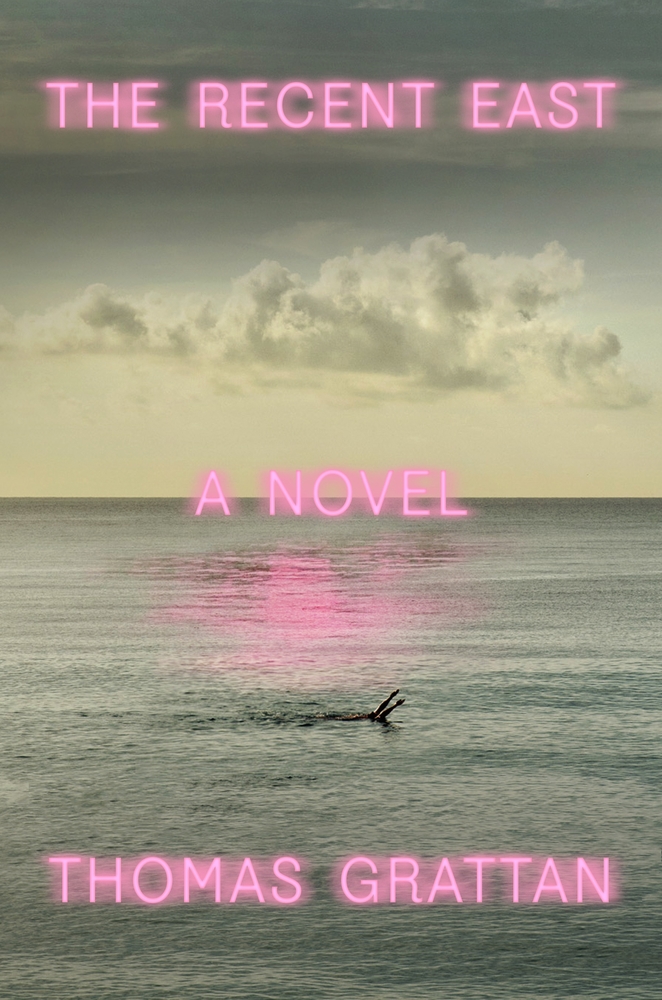 Thomas Grattan’s ambitious novel, The Recent East, rests on an interesting premise. In 1968, a young German girl is suddenly told by her parents that they are leaving their East German home in the city of Kritzhagen to defect to the West. Taking little with them and banking their success on three forged passports and the sheer brazenness of their nonchalant escape, they make it safely to Cologne.

In Cologne, the daughter, Beate Haas, begins her strange life in the semi-affluence of democratic West Germany. She finds herself looked down upon for her cheap sack dress; her frugal and impoverished home life seems to cling to her clothing like an odious smell. Her nickname at school becomes “the little Soviet.” Her father, a philosophy professor, has managed to obtain a temporary teaching post for one semester at the university, and we soon realize that their escape has been meticulously planned from the start. The defection has been more Beate’s father’s desire than her mother’s. The Cologne apartment originally belonged to one of the father’s old friends, Frau Adela Eggers, who has recently died but seems to have been in on the escape.

Before long, however, the father despairs at the state of West German society and German culture as a whole, which seems to have lost none of its inhospitality, intolerance, jingoism, and cold elitism. The father, known as Vati, decides to move the family to Scotland, where Beate finds that she and her parents are warmly appreciated as “exotic” foreigners. In Scotland, Beate acquires a boyfriend, Duncan, and thrives in the liberated teen culture of the late sixties. But her father, ever restless in his pursuit of happiness and a more humanistic, ethical, and forgiving society, uproots the family again as they immigrate to the cold reaches of Minnesota. In America, her father, much to the embarrassment of Beate, manages to obtain a teaching position despite the fact that he hardly speaks any English. Beate adapts over time, taking note of the lazy indifference and educational deficiencies of her new country. Then, in a few short pages, Grattan quickly jumps ahead to the future. There we find that Beate is a berated housewife living with a ne’er-do-well husband, Paul, in Glens Falls, New York, with two children of her own: Michael and Adela.

It is 1990, and Grattan does an excellent job in setting the scene of the bland, hardscrabble working-class life of Upstate New York. This rather bleak landscape is replete with a single Grand Union supermarket and ugly abandoned lots, as well as a local news story of a recent crime, the murder of a young dental hygienist. Grattan is excellent at capturing the heartlands of American capitalism and skillful at pointing out the failings and inequities of liberal democracy. These descriptions are paralleled to the similar deprivations and austerity of former East Germany, which plays a prominent setting for his narrative. There is a nice irony that Grattan exposes in juxtaposing the harsh reality of American life and its purported hype as paradise, as the ever-famous American dream.

The idealism of American capitalism and the idealism of German communism are both shown with their own unique philosophic pros and cons, as well as their own unique promises and lies. A communist Germany with a strong sense of community, educated self-discipline, and  an emphasis on non-materialism, is compared with an American West of individual hedonism, greed, narcissism, corruption, and loneliness. Neither system is assuredly successful.

The main plot device of the novel rests on two events: first, Paul abandons Beate and his family after seeking a long-desired divorce; and, secondly, Beate receives a letter from the newly-reunified German government telling her that her now deceased parents’ home in Kritzhagen is hers for the taking. Single and alone with two small children and little income, Beate uproots their lives and returns to Germany. What she discovers there in the ruins of her childhood house is hardly a home to speak of. This wrecked dwelling introduces a metaphor used by Grattan throughout his story, namely the impossibility of finding a fixed home in the brokenness of aging liberal democracies in the late 20th and 21st centuries. Beate, who sought relief from the foreignness and estrangement she felt all of her young life, realizes that her state of mind, one of acute alienation, is again reflected in the dystopian landscape of post-communist eastern Germany. The task of claiming an identity, putting down solid roots, and, like her father, ending that elusive pursuit of acceptance and normality, is unobtainable and no longer realistic. Ultimately, she must create a home out of her imagination and let go of old assumptions and paradigms in this new world order.

For the first few weeks, Beate is subsumed in a deep depression, sleeping most days and caught in a state of perpetual paralysis. This PTSD is amply reflected in Grattan’s description of the former East Germany in ruins. Empty, abandoned houses are everywhere, and Michael, her son, scavenges these houses to assemble furniture and fixtures in order to construct for his mother a “home,” some place where she can find security, acceptance, and solace, and to awaken her from her breakdown. Beate, like her former homeland, faces the arduous process of rebuilding lives from the ground-up, reconstructing friendships, and restoring social bonds.

Adela and Michael, the Adam and Eve of this alienated and rootless post-Edenic world, are left to fend for themselves as Beate grieves. In Glens Falls, they have developed their own co-dependent rituals for survival, fed by their imaginations and a social code they have constructed on their own. Michael, unaware of his own anger issues and self-hatred, has seized upon a favorite expression: “Fuck a duck!” This he repeats over and over to his sister. This expression seems to best signal their shared frustrations and Weltschmerz at a topsy-turvy world, where children parent the adults and the adults avoid responsibility. Alienation is Michael and Alena’s permanent state of living, and their defensive measures are far from understood by the self-conflicted and weary adults around them.

Michael and Adela have come to refer to their Mom, Beate, as “the German Lady,” as though she were some detached figurehead. And Adela has become a walking encyclopedia of the Holocaust and Nazi history, her mind packed with morbid facts. Cutting across gender stereotypes and youths’ supposed innocence and playful behavior, Adela cusses fiercely and verbally fends off the bullies that assault her brother or try to subjugate the women in their lives. She, more than anyone in the family, presents as a hard-edged, practical, and sobering counterpoint to Michael and his mother’s romantic delusions. And where Michael lacks direction and a certain integrity, Adela is quietly calculating and smart, biding her time to accomplish her own survival and destiny.

Later in the narrative, Michael discovers he is schwul, or queer. He makes friends with a young rebellious girl named Lena, and is initiated into sex at a party by a thin, acne-faced boy nicknamed “Maxi Pad.” A distant cousin, Liesl, then visits them. Liesl used to babysit Beate back before she and her parents defected, and  Liesl and Beate bond. In the narrative, Liesl acts as a sort of barometer of the rising fortunes of the East to its eventual transformation into a bastion of middle-class luxury and entitlement.

Both Michael and Adela fall in love with Udo, Liesl’s son, and thus develop a familial rift that ultimately sends Adela packing. She returns to live with her father Paul in the United States, who has won a financial gamble and continues a game of selfish opportunism that seems so much a part of America’s celebrated culture. Michael, Beate, Udo, and Liesl begin to find their way as business returns to the East and new love interests appear. Beate remarries, and Michael turns to embrace the wild anarchistic frontier that the former East has become. He opens a queer bar decorated in the kitsch of East Germany’s previous communist culture. He calls his bar Secret Police, and begins serving cocktails such as “Don’t Drink the Kool-Aid” and “The Party Line.” Later on, Adela returns to visit and settles for a time with her young Black South African child, Peter. Adela apparently became a nurse, and spent several years with her husband in South Africa providing care for the most impoverished and desperate communities.

The theme of home and the feeling of foreignness is obviously of concern here for Grattan in The Recent East, and Adela’s son represents another level of foreignness in the issue of race. This racial “otherness” ties in with the otherness Michael feels by being gay, and is further extended by a subplot where Muslim refugees in Kritzhagen are attacked by Neo-Nazi skinheads. Forced upon otherness is a recurring theme in this novel and how enlightened communities fail at inclusiveness despite their claims of liberal democratic values and the promise of financial prosperity.

Grattan, who is a prize short-story writer, finds his way into the complex narrative demanded by the novel. He is strongest at the beginning of this novel, where careful observation, paired with a slow, assured, and uncluttered prose style, investigates a single profound theme.

Beate’s defection is perfectly handled, as are the inner thoughts of adolescence and the moodiness and rebelliousness of teens. Grattan, as I said, masterfully describes the shocking reality and broken illusions presented to the family in a post-reunification Germany, still badly divided and self-conflicted. At the start, Grattan’s handling of Michael’s first sexual and romantic experiences are perfectly captured, and Adela’s escape at night to a graffiti-covered phone booth, where she calls her father and begs to go “home,” is pitch perfect. Small gems of storytelling abound here.

However, Grattan seems to lose the thread, and begins to overload his plot with a flow of secondary characters and actions. At times I feel he resorts to synopsizing his narrative and racing to tie up the many plot points he’s set in motion, losing in the end that nuanced tale of personal and political alienation and displacement.

Descriptions of Michael’s sexual episodes and drinking are repeated frequently, and seem unnecessary for presenting his inner torment and self-destructive addictions and impulses. And his eventual rescue by a poorly realized romantic character, combined with a busy checklist of character resolutions, are less than believable.

But Grattan is a masterful writer when it comes to finding the odd and alien struggles of our present-day predicament. He is deft at exposing our longing, especially in being queer, to dispel and discard old myths and crushing ideals, to defect and cross borders in imagining a stranger, freer and more diverse home.